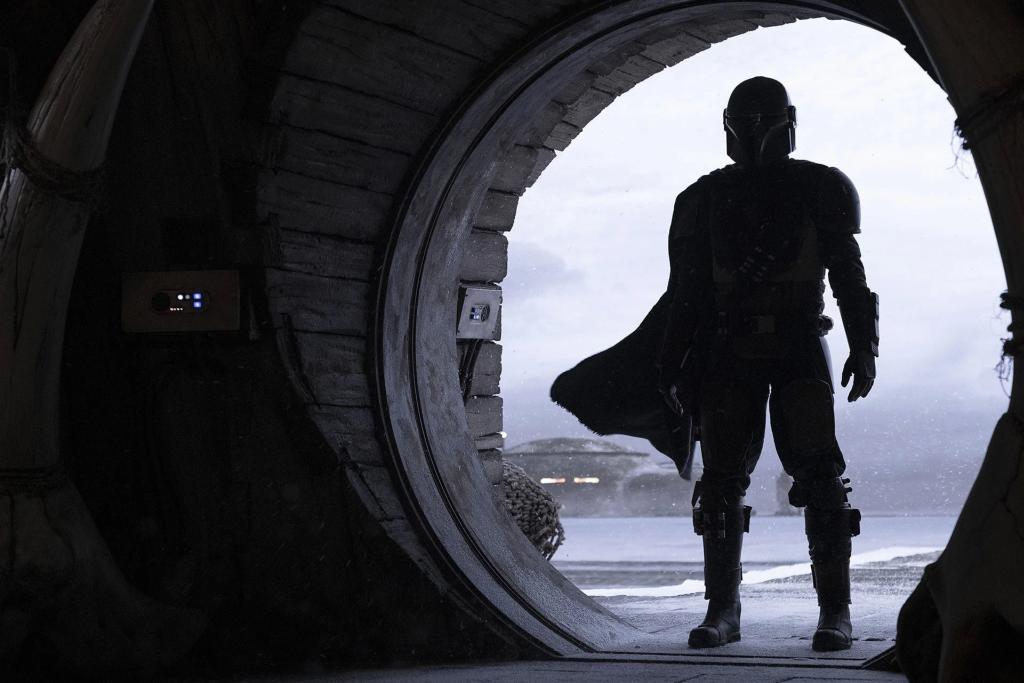 What is it ? : The episode begins with the unnamed protagonist walking into a bar, the wind from outside spills a large man's drink, so he and his Quarren ally stop bullying the small alien they've been harassing, and turn their attention to the Mandalorian protagonist. They threaten him, and he beats both of them up, before turning his attention to the small alien they were bullying, revealing that he has a bounty contract for him, and leaves with the alien in manacles.
They call for a speeder taxi, and the Mandalorian rejects a droid taxi, accepting a broken down speeder instead, which takes them to his ship, the driver warns of creatures under the ice, and is destroyed as he leaves, and the Mandalorian and prisoner board the ship in the nick of time, with the Mandalorian having to shoot the creature which has attached itself to the ships landing gear.
As they travel through space, the prisoner makes the excuse he needs to go to the toilet, and starts searching the ship, discovering that the Mandalorian has other prisoners encased in carbonite.
The Mandalorian lands his ship and meets with the person who issued the bounties, and hands them in, asking about other contracts, and he is told there is only one, but the contact wants to meet face to face. As his ship is unloaded, he heads to the contact, and finds them wearing a uniform emblazoned with the logo of the Empire, and guarded by four scruffy looking Stormtroopers. He is offers payment in Mandalorian Iron (beskar), to bring back a target dead or alive.
He takes the beskar to an underground hideout filled with Mandalorians, and gets the Iron made into a shoulder piece for his armour, before heading out on his mission.
Arriving on the target world, he is attacked by Blurrgs, and rescued by another alien, who will act as a guide to his target, as he thinks the Mandalorian can deal with the guards who are causing trouble on the planet. After learning to ride a Blurrg, they head out to the settlement, and the Mandalorian approaches it alone, spotting an IG assassin droid attacking the Nikto guarding it. He teams up with the IG, offering to split the bounty, and they capture a heavy weapon and take out all the guards, blasting their way into the bunker where they detect their target who seems to be inside a small container.
Opening the container, they discover a small alien of the same species as Yoda, and the IG droid reveals that his contract is for killing the target only, so the Mandalorian shoots and kills the droid.

High Points : Wow. That was astoundingly good. With an excellent mix of action and humour, the episode expands a fairly unknown period of time between "Return of the Jedi" and "The Force Awakens". Dealing with a number of subjects we've not really seen before, from the fate of the Mandalorian people (seemingly homeless and almost wiped out (I guess Kreia was right after all)), to the fate of the Empire after the death of Palpatine and Vader (we've not seen much yet, but they look pretty run down and grubby).
The humour really works, from the broken down and backfiring Speeder he hires to take him back to his ship, to the IG Droid constantly threatening to blow itself up when their mission looks like being a failure (it is programmed to not allow it's technology be captured).
And wow, a totally unexpected cliffhanger at the end, I'm desperately waiting for Fridays episode.

Oh, and have to note how gorgeous this looks, from the planetary vistas, to some of the alien effects (for example the Quarren at the start of the episode), they're really top class, although as I'll note below, that doesn't carry through to every alien in the show.

Low Points : Errr, I'm really going to have to search here, and nothing really takes away from the episode.
Werner Herzog as the "Imperial" officer who hires the Mandalorian, has such a strong accent that I found him hard to understand, very different to the clipped english accents we've seen Imperials with before (yes I know that Orson Krennic had a different accent, and that was chosen on purpose to show he wasn't part of the elite, and had to work for his position, part of his conflict with Tarkin).

I also found a couple of the aliens to be more Star Trek than Star Wars, especially the bounty that the Mandalorian collects at the beginning, who just looks and sounds like a typical american actor with bits of rubber stuck to his face. Which I found a bit distracting.

So what do you really think ? : I loved it.
Not sure what else to say, we've got an intriguing plot, some solid acting, and we're seeing parts of the Star Wars universe we've never seen before (although my eldest son did describe the first planet as "cold Tatooine"), I'm desperate to see the next episode, and even better it's only in a couple of days.

Final Words : What a start to a show. There's been a lot of flack thrown at Disney for their run of what's generally considered not great Star Wars, with The Last Jedi, Solo and Resistance, which has also led to some revisionist comments about The Force Awakens. But people forget that Rebels and Rogue One were both in the Disney era as well, and were some of the best Star Wars made. And the Mandalorian proves that they're capable of doing it again.
Here's hoping that this carries over to Rise of Skywalker as well.