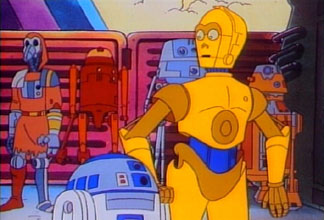 What is it ? : C-3PO and R2-D2 are on the world of Tyne's Horky and are working as waiting staff in a cantina, after overhearing a bounty hunter being hired to track someone down, the droids cause a calamity and are fired.
Needing a master to give their lives purpose, they put themselves up for sale, but no-one is interested until another Android is added to the package, where they are bought by an alien who instantly begins to mistreat them. However a miner, Jann Tosh, who just paid top money for a mining drone, swaps his drone for the three.
As they leave town on Tosh's single wheeled vehicle, the bounty hunter, Kleb Zellock , spots the group as containing his target and gives chase, but they manage to lose him.
Arriving at the mine, Tosh's uncle, Putch Gundarian, berates Tosh for getting such useless droids and android, especially when the android collapses. R2 scans the android, and they discover that he's not a droid at all, and is actually just an alien wearing armour and a breath mask.
Over the next few weeks, the droids pull their weight, with C-3PO acting as cook and medic, and R2-D2 helping out in the mine, while the wounded alien recovers, and proves himself to be extremely strong, although totally unaware of his past, so they name him, Kez-Iban.
There is a mine collapse, and although wounded, Putch's life is saved by Kez-Iban who holds the roof off the wounded man while Tosh can reinforce it. And they rush Putch back to town to the medical centre.
The bounty hunter, Zellock, spots them in the town, and captures them, imprisoning them in his mine. There they find themselves manacled by their ankles along with another alien of the same species as Kez-Iban, who recovers his memory, revealing himself to be a prince of his people who had his memory wiped by an evil vizier through use of a poison.
C-3PO detaches his leg to escape from the manacles, and crawls over to the controls to open the manacles, allowing the group to escape. As they escape they discover the mine is on a seam of valuable Nergon-14, used by the Empire in their Proton Torpedoes, however improper mining practices has led to an escape of explosive gas, and as they are confronted by Zellock, there is an explosion which allows them to escape.
Kez-Iban, now revealed to be Prince Mon Julpa, plans to return to his home world, and thanks the group for their help and kindness while he had lost his memory, while Putch uses the information they discovered about the Nergon-14 to hit a seam of it in his mine, making the two men rich.

High Points : I'm going to lead with a very minor plot point in this episode which impressed me the most, C-3PO removing his leg to escape the manacles. I really liked this moment, as it took advantage of the reality that C-3PO is a machine and not just a man in a suit. His leg is manacled, so he removes the leg. It's amazingly simple, but a really excellent moment which takes advantage of the reality of the character in universe.

But to tell the truth, there isn't much more to like in the episode, the mining world of Tyne's Horky is quite interesting, and seems believable, with the town providing all the services the miners need, but having a solid frontier feeling to it, while does mean that Droids is creating some of the most interesting settings of a Star Wars shop I've seen in a while.

Low Points : Well we've got a bunch more occasions of C-3PO messing up and falling over, which is really causing me to sigh in disappointment by this point already, making me glad there's only 13 episodes of this to watch.

I was also slightly annoyed at the use of the bounty hunter, Zellock, in this episode. He's actually hired to find Prince Mon Julpa / Kez-Iban by a loyal member of the Prince's people, but when he isn't offered more money for actually finding the Prince, he takes both the target and the person hiring him prisoner to seek someone that will offer him more money. I can't quite understand how someone like that would manage to stay in business if he extorts and imprisons the very people that try to hire him to do a job.

Also, what is going on with Kez-Iban being sold as an Android, I'd always thought that Droid was just short for Android, but this episode seems to treat them as terms for different things. I could understand them thinking that Kez-Iban is a Cyborg, similar to the decraniated seen in the more recent movies (so an organic modified with a droid brain to make them subservient). But surely that would still be slave trading, and I don't get the feeling that this kids saturday morning cartoon was ready to deal with the ills of slavery . . .
But this half hearted treatment of it leaves the subject confused and difficult to work out what was actually going on. Did they honestly mistake Kez-Iban for a droid? So he'd been starving to death slowly since no one was giving him food or water? It does seem to match the facts, but now I want to know how he ended up in the droid auction anyway?

And one final little moan, the droids new owner, Jann Tosh, is so generic, that I have to admit that I easily confused him with Thall Joben from the last few episodes. Thall had a more remarkable (shaved at one side, punk style) haircut, but the two were just kind of generic 80's cartoon characters that I had to remind myself that Thall wasn't in the show anymore.

So what do you really think ? : Well apart from bad guys acting like bad guys without any real motivation, and the set of the episode not being explained and being a bit of a confused mess, there's some good ideas in this episode, and a nice setting, so I did actually find it more captivating and interesting than the last couple of episodes.

Final Words : So, I'm confused by the end of the episode, is that the end of C-3PO's and R2-D2's service with Tosh and Putch? From the title of the next episode, "The New King", it seems to me that they'll be accompanying Prince Mon Julpa on his quest to regain his crown. So this set of owners have only lasted one story? Or will Tosh accompany them on their next adventure, I guess I'll have to find out.