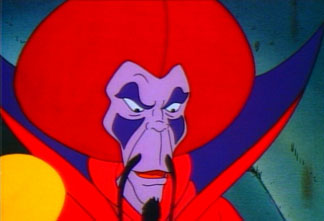 What is it ? : Prince Mon Julpa, Jann Tosh, C-3PO and R2-D2 have hired a ship to take the prince back to his home world, Tammuz-an,the captain turns out to be Jessica Meade, who was briefly seen in the last episode in the cantina. Jann recieves a holographic message from his uncle, Putch Gundarian, which wishes him best in his exploration of the galaxy. But then they come under attack by a pirate ship piloted by Kybo-Ren, but manage to escape when IG-88 turns up and unexpectedly helps them.
They arrive on Tammuz-an, and Captain Meade attends a hospital to deal with a wound she received in the battle with Kybo-Ren, meanwhile the rest check into a hotel, where the Prince reveals that he must present his scepter to the Keeper of the Tower the next morning to claim leadership of the planet But they spot Vinga watching them, he is an assistant to the Vizier Zatec-Cha who poisoned the prince so he could be the New King.
They chase after Vinga, but meanwhile IG-88 ambushes the prince and takes the scepter which he uses to capture the prince. Meanwhile Zatec-Cha's guards grab Captain Meade from the hospital, and Jann Tosh, C-3PO and R2-D2 chase Vinga into a alleyway where guards wait in ambush.
They are all taken to Zatec-Cha, who uses the Scepter against them, and orders that they are thrown to his pet monster, but while it is initially threatening, R2-D2 removes some large parasites from it's tail, removing the pain which is causing it to be so violent, and it calms down allowing them to chase the Vizier to the uppermost towers of the palace where the scepter must be presented.
They take to skiffs and speeders, and the Scepter gets passed from person to person several times, as it is dropped and caught before it hits the ground, until the Prince delivers it to the Keeper, and is made King of Tammuz-an, and appoints Jann Tosh as his aide in gratitude.

High Points : For a villain, Zatec-Cha comes up with a pretty decent plan to capture the heroes, getting one group to charge in chase into a trap, leaving his main target unprotected, it's divide and conquer, and for once it actually works. His plan to feed them to his pet doesn't work as R2-D2 suddenly and unexpectedly reveals a knowledge of pet care, but otherwise it's a good plan, well executed. Perhaps he should actually have been king (since we don't see anything evil that he does apart from trying to claim the throne, and even when he did that, he only wiped the princes memory, and didn't try to kill him until he returned).

During the chase at the end for the Scepter, they make use of small skiffs and vehicles, which just happen to be the "Mini-Rigs" from Kenners Star Wars figures series of toys. Which was actually nice to see them making use of the toys and putting them in stories. Although to tell the truth, they're just really trying to do a He-Man and get kids to buy already existing toys based on them now being in an episode of the TV show.

Low Points : The alien race of the Tammuz-an certainly have an interesting style of hair, part teddy boy quiff (they preen and play with their hair at times), and part turban (when the heroes grab a handful of hair and pull, making them spin around as it unwraps, which makes no sense at all).

When they land at Tammuz-an, there's both an A-Wing starfighter, and a B-Wing starfighter sitting in the hangar far earlier in the timeline than they should exist. And while they can claim that the A-Wing is actually an R-22 Spearhead, since both are externally identical, the B-Wing has it's short side wings, so cannot be an H-60 Tempest bomber as has been claimed by some.
And even if these two ships weren't out of time. Why are two vessels, both designed and built by the Rebel Alliance sitting in a hangar on an alien world? Inquisitive minds want to know!

This is the most "Scooby Doo" that the series has been so far, with cartoon sound effects as people move, and childish elements such as causing the bad guys to spin round like a tornado when their hair is yanked. It's perhaps even more childish than most of the kids cartoons of the time, a massive disappointment for Star Wars.

Oh, and I know Star Wars has always been keen on reusing names, Starkiller for example was the original surname of "Annikin Starkiller" who was going to be the hero of the first movie before Starkiller was Darth Vader's secret apprentice in the Force Unleashed games, and a Death Star rip off in the Force Awakens. And Mace Windu was a Squib trader on Tatooine in one of the West End Games Galaxy Guides. But for some reason Kybo-Ren annoys me more than any of them, probably because the name was changed slightly. (unless they drop in a reference in Rise of Skywalker that Ben Skywalker took the name of a Pirate captain as his Dark Side title).

So what do you really think ? : Oh dear, these episodes are bad. Through all the reviews I've done over the past 3 years or so, I've usually managed to find positive points about everything I review. But I have to admit that I'm really struggling with Droids, my mind was just totally blank for quite a while while I tried to think of even a single thing I could say positive about this episode, and both of my positive points are actually pretty negative at the same time.

Final Words : Once again, the droids story with Jann Tosh seems to have reached a natural ending point, but there doesn't seem to have been a handing over to a new owner, so I can't really be sure, I guess I'll just need to wait to find out . . .