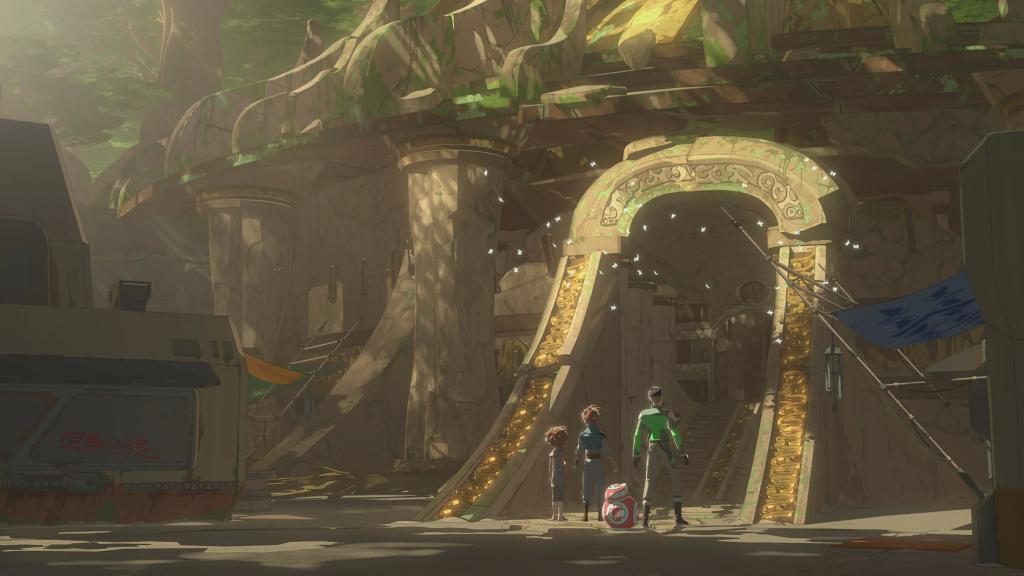 What is it ? : Kaz, Torra and Freya are summoned by Captain Doza and Yeager, who tell them they've arrived at one of the few colonies this far out, and they want them to head down to buy supplies. The two women take their fighters, and Kaz pilots a shuttle, however as he prepares to board, the kids, Kel and Eila approach him, telling him they've been aboard the station since they left Castilon, and haven't seen trees. He agrees to take them with him.
The three ships set down on Ashas Ree, which seems to be abandoned, they split into two groups, with Freya and Torra in one, and Kaz and CB-23 in the other, agreeing to meet again in an hour. Kaz returns to the kids, but finds they've began exploring already, and have discovered what they think is a Force Temple.
They hear a voice so enter tunnels beneath the temple, which are dark with glowing red writing on the walls. The kids get separated from Kaz, who is shocked by a trap leaving him somewhat woozy, so when he hears the voice shouting for help again, he becomes convinced it is coming from a small artifact and he touches it triggering another trap, which places him in the same trap as the voice, which turns out to be an old tattooed woman.
CB-23 goes to get the kids, and Kaz triggers yet another trap, which spins the room, sticking Kaz and the Old Woman to the walls, and then grinding mechanisms come from the floor. However the kids arrive in the room above and the old woman talks them through how to deactivate the trap, and free Kaz and her.
When they rejoin the kids, the woman takes the artifact, but Kaz triggers yet another trap, and they flee the temple as it collapses.
Outside they discover that Torra and Freya have been captured by First Order Raiders, special troopers who search and capture various artifacts for their supreme leader. Kaz and the Kids also get caught, but the old woman uses the artifact, which explodes killing the Raiders.
They offer the Old woman a way off the planet, and she tells them her name is Mika Grey, and when questioned by the kids, she tells them she is neither Jedi nor Sith, as no one owns the Force.

High Points : About the only thing I can offer on the up side of this episode is that it makes a successful homage to the Indiana Jones movies, with the new First Order troopers being called Raiders, with them entering a Temple of Doom, etc. It's fairly subtle, as a homage should be, but really obvious when you look for it, so well done them.

Low Points : So, I've got a question. When has the Colossus been spending all of their money?
Because Captain Doza tells Kaz, that he's given him the very little money they have left!, which insinuates they've been spending money somehow. Which begs the question, when? They seem to have been lacking anywhere to spend the money, have they been paying the Pirates or something?

When did the kids see trees on Castilon? It's a water world, and when has anyone else seen trees since? They've been on a couple of rocky worlds, but certainly not anywhere with trees, and even when Kaz went to the colony where the kids came from and it seemed to be a rocky world. Basically what I'm asking here is why are the kids bothered about not seeing trees in the past month or so, since I'm not convinced they've ever seen a tree in their entire lives before.

Over the course of this episode Kaz sets off so many traps, and has returned to the super clumsy idiot that has annoyed me throughout the series. Why they feel they need to treat the hero as a completely useless fool I really don't know, because as I've stated before it makes it difficult to like him. And if everyone around him thinks he's useless, then maybe they're right and we're watching the wrong person.
Oh, and the kids are super annoying as well, ignoring virtually everything that Kaz says, I'd have been super happy to see them being devoured by some jungle creature the first time they wandered off when he told they to stay where they were. Even they think so little of Kaz, that they state they're wandering off when he's still in earshot and has told them to stay still so he can find them.

The episode leaves us with a bit of a mystery. Where did the people go? Mika tells Kaz that they ran away when she caused the Sith Temple to emerge from the ground. But did they literally run, so are somewhere in the Jungle? Or did they take ships and totally evacuate the planet? In which case why didn't they take anything with them, so will arrive at their destination penniless and without any supplies.

The First Order Raiders, Mika tells us are locating artifacts for their Supreme Leader. But isn't snoke dead? Or have they just not found out yet? Or are they now working for Kylo Ren doing the same job? Inquiring minds want to know.

Mike states at the very end of the episode, that "No one owns the Force", which is such a heavy handed repeat of the mantra of The Last Jedi that it just annoyed me.
While there's been various other Force Using sects in the Expanded Universe, it always kind of stuck to the original idea that the Jedi and other Sects follow the rules to avoid falling to the Dark Side, which is why the Jedi and Republic had a galaxy wide screening program, to avoid Darksiders springing up from time to time and causing chaos. The Sith themselves were a set of rules, to force Darksiders to work together, as left to their natural behaviour, they'd just slaughter one another.
But the new movies (and now Resistance) seems to be just selling us the idea that you don't need to be a Jedi to be special, that following the rules set by the Jedi just isn't cool. Just do what's natural for you. Just you be you dude. But from what we've been told, that will just lead to a lot of force users turning to the Dark Side and killing a whole load of people.

So what do you really think ? : This is back to the bad old days of Resistance. Kaz was acting as a fool. The plot doesn't make a huge bunch of sense, and it just wasn't any fun. I hope things get back on track soon.

Final Words : Next episode is "Rendezvous Point", where Captain Doza attempts to meet a Resistance Pilot from his past, but they've been captured by the First Order. So hopefully we'll discover something more about his service for the Empire, and we might get the return of Tam, although I've not really missed her.