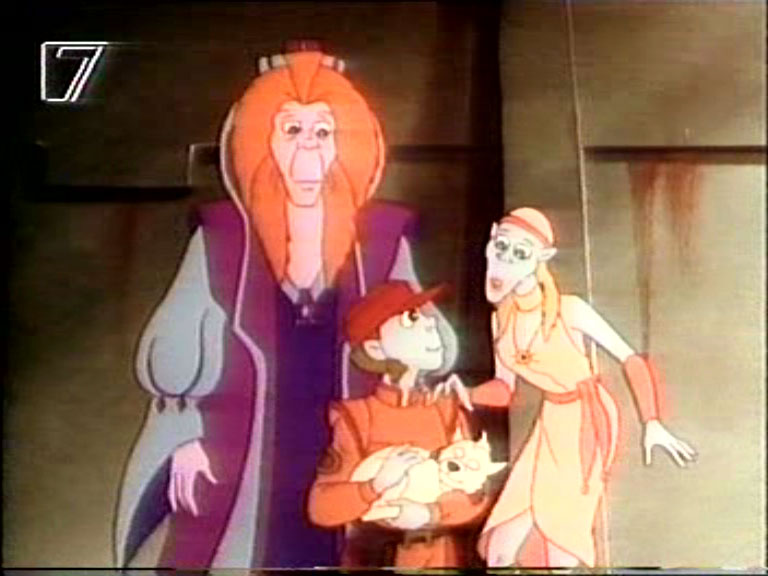 What is it ? : The son of Lord Toda, Coby, has been accepted into the Imperial Academy, and Jann Tosh, C-3PO and R2-D2 are to accompany him there and make sure the youth makes it safely.
Coby has inherited riches from his Great Uncle, and his father hopes the training will give the boy some discipline. As they pass through the starport on Tammuz-an, the boy tries to buy a couple of war droids, but C-3PO and R2-D2 stop him, and they catch their flight.
They arrive at Zallakesh spaceport on Chuzalla where they are to transfer to another flight, and Tosh leaves Coby in the care of the droids. He spots a ship labeled the Starhunter's Intergalactic Menagerie, and the crew spot Coby's rare pet, Ingey and steal him. Coby buys a starship to give chase, and they manage to magnetically adhere to the outside of the Starhunter ship.
The ship arrives on the world in the Dandelo system, and they seperate and crash in the jungle. They encounter a primitive avian species, who are being hunted and enslaved by the Starhunters, and team up with them to free captives, including Coby's pet, Ingey from the Starhunters.
C-3PO impersonates a rare creature, the Spotted Jugadoo, which lures the hunters out of the camp into the jungle to capture it. However Coby is captured by a droid when he sneaks in to free the captives, and is thrown in a cage with another captive, a human called Greej.
A real Spotted Jugadoo is lured in by C-3PO's calls, thinking he is emitting a mating call, and it smashes into the base, but everyone is cornered by Stroon, the leader of the Starhunters, but before he can fire, Jann Tosh arrives having followed their distress signal, and captures the starhunters.
Greej tells them that he once used to return creatures to their natural habitats, but ran out of money and sold all the creatures to the Starhunters, and Coby becomes his partner to help with this worthy task and fund it with his inheritance.
Meanwhile, Jann Tosh breaks it to the droids that he has been accepted into the Imperial Academy, but he isn't allowed to take droids, so bids the droids farewell, not as master to servants, but as friends.

I also quite liked the Fuzzum, who are the avian primitives that inhabit this jungle. They are reminiscent of the Ewoks, but also of the Avian Gozzo species from Star Wars: Resistance, with small bird bodies on long legs.

Low Points : So why does this series have to be full of annoying characters, Coby is a total brat, and while I'm aware that it's all so he can grow and become a better person by the end of the episode. I'm afraid all that I really do is judge Lord Toda's parenting skills, who is allowing this preteen kid full access to his inheritance of a vast quantity of cash. Cash the kid wants to spend on Starships and Battle Droids and funs stuff, and I really don't blame him, because if I was 13 in the Star Wars universe and rich, I'd be buying Starships and Battle Droids. I blame Lord Toda, Lord Toda is a lousy parent for not setting limits for his son.

And I have to question the fact that the hunters seem to have only brought 1 gun with them. They seem to have captured all sorts of aliens with that just 1 gun, but it certainly doesn't seem many for a group of interstellar big game hunters, and allows Jann Tosh to totally outgun them by shooting the gun out of Stroons hands.

At the end of the episode, they say their goodbyes to Jann Tosh, and Prince Coby is off with Greej, which leaves C-3PO and R2-D2 on this jungle world, without a ship and we're given no idea how they're going to get to their next adventure, shouldn't Tosh actually drop them off somewhere rather than just abandon them here?

So what do you really think ? : While marginally better than the last episode, there really isn't anything worthy of remembering about these episodes at all.

Final Words : So, with Jessica gone, and Jann Tosh now gone, I guess finally C-3PO and R2-D2 are going to move onto new owners? Unless they end up back in the hands of King Julpa.