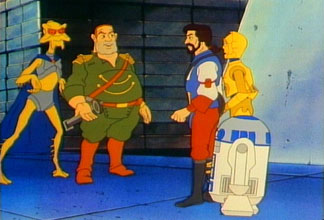 What is it ? : C-3PO and R2-D2 have a new owner, Mungo Baobab, a trader who is seeking the location of the Roon System to revive the fortunes of his fathers merchant fleet. He purchases a map to the route through an asteroid field called the Cloak of the Sith, but the meeting is interrupted by Stormtroopers, but R2-D2 overloads their audo compensators, providing a distraction in which they escape.
Meanwhile, Imperial Admiral Screed is exploring the Cloak of the Sith to discover anything of value, when he receives a communication from Governor Koong of the Roon System, who is keen to form a lucrative alliance with the Empire.
Mungo and the Droids head to the Baobab archives where they look at the map, and discover that following the Rainbow Comets will lead them safely through the Asteroids. So they take Mungo's ship, and follow the comet, although they take damage from asteroids, and are caught in a tractor beam from New Umboo Station.
They are taken aboard, where Governor Koong wrongly identifies them as emissaries of the Empire and gives them a guided tour, however, Screed arrives and they are arrested. Mungo is to be handed over to Screed, and the droids reprogrammed, but R2 fakes an overload and helps them escape in a cloud of smoke. They cause overloads aboard the station, causing Koong and the Empire to evacuate the station as it crashes into an asteroid. However, Mungo and the Droids steal a ship and also escape in the nick of time, but are stranded as the vessel is short distance only.
Luckily they discover they are almost at the Roon, system, and with the help of another prisoner they helped rescue, they fly off towards the planets.

High Points : There are actually a number of good features with this episode, for example we don't have any clumsy introduction of Mungo Baobab and how the droids end up working for him. It's straight into the action with them already in that relationship. And the reason for the plot actually makes a bunch of sense, Governor Koong is actually a pirate who has managed to navigate the Cloak of the Sith Asteroid field, and profits off not only the riches of the Roon system, but also from preying on ships damaged in the asteroid field. And Mungo Baobab intends to save his fathers merchant company, by opening up a new trade route through the asteroids with the Roon system. Which actually would make economic sense, unlike many of the plots of these shows.

I must also comment that Admiral Screed is an impressive character, who I hope will stick around for a bunch of episodes (well we've only got 4 more to go), with his cybernetic implants in his face, imposing size and voice, he actually is more menacing than most Imperial characters introduced in spin off media.

Low Points : Those words don't mean what they think they mean, when Screed receives the communication from Koong, the route to Roon is programmed into a probe droid, and Screed orders it to be "Deprogrammed".
Also later in the episode, they take damage from the asteroids, and Mungo uses the Aft thrusters to get them to safety. However, rather than being the thrusters at the aft of the ship, these are thrusters which make the ship go aft by firing from the front of the ship.
I really don't think the words mean what they think they mean.

So what do you really think ? : A definite improvement on previous episodes, and it's nice to see the Empire getting used as the villain of the piece, although Koong's pirates are overused. That said, while Koong is a fairly standard kids cartoon villain, his bodyguard Gaff is interesting, an insectoid creature with an unusual look and speech pattern.

Final Words : Oh, I must also ask who Bradley Poon is?
The prisoner that they rescue from the pirates is named, Noop Yeldarb , which is just Bradley Poon reversed, but I cannot find out anyone of that name connected with Star Wars, so it makes me wonder who he is.
New time we're back with "The Roon Games", so more exploration of the Roon system, hopefully they keep up with the interesting ideas they started off with in this episode rather than just falling back into old tropes as they usually do.