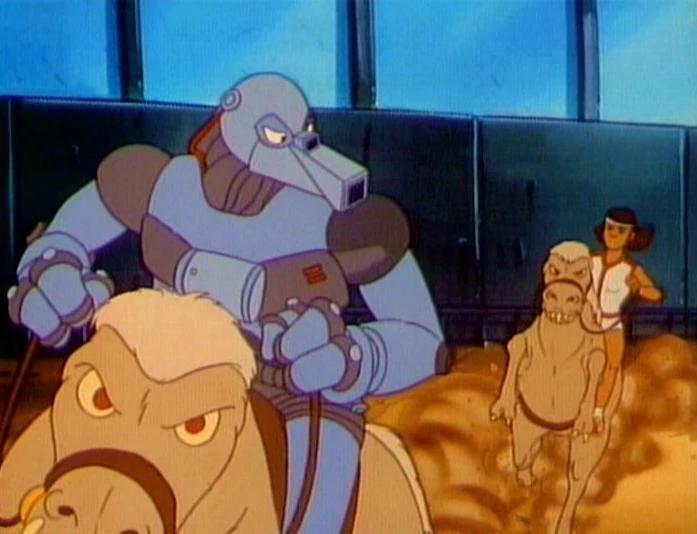 What is it ? : Mungo Baobab, C-3PO and R2-D2 are heading towards Roon aboard the Cloudcraft they abandoned the exploding New Umboo Lightstation in. As they enter the atmosphere they are intercepted by fighters, and crash in the desert of the world.
Their crash is spotted by Nilz Yomm and his daughter, Auren who investigate and befriend the trio. However the crash has also been spotted by Gaff, Governor Koong's bodyguard, who notices they are on top of a massive dinosaur like creature called a Shamunaar. The group manage to escape from the monster, and head for the Roon Games, where Nilz and Auren were heading originally, and Mungo can buy parts for the damaged Cloudcraft.
Admiral Screed and Governor Koong discuss what else may be of value to the Empire on Roon, and Koong suggests that the Emperor might enjoy the Roon Games, so they head there to watch, but spot Auren and Mungo arriving.
Gaff arranges to sabotage Aurens team, the Umboo Racing Team, putting droid coolant into their food, making Mungo sick and unable to take part in the final race, the Drainsweeper.
The race is a three lap tag team race, where the racers ride Rockhoppers, and are allow full contact to push each other off their steeds, with the team one person down, C-3PO takes place in the race, and after a difficult race, the heroes win and are awarded medals. Auren tells Mungo that he'll have no problems finding a repair team now, and that she will help him try to locate Roon Stones, and C-3PO gives his medal to R2, telling him he deserves it more, but next time he can do the racing.

High Points : Well it's the prequel to the Pod Racing scene in the Phantom Menace, and isn't too shabby, with a fairly tense and exciting race, and the story moves along smoothly and at a good pace, with it telling a coherent story for once.

Low Points : However, I really do have to question the fact that enemy of the Governor, and enemy of the Empire, Mungo Baobab turns up at the Roon games and is witnessed arriving by the Governor and an Imperial Admiral, and isn't arrested or stopped, which doesn't seem to make a whole load of sense to me. Now perhaps there's some kind of non-interference rules at the Games, where the Governor isn't allowed to arrest competitors, but that seems a little of a stretch that both the dictator of this planet and the representative of the Empire would both just let him walk free and try to beat him using shenanigans like poisoning his food, and playing with the safety devices in the race.

So what do you really think ? : Well, not the worst of the stories, and I suppose that counts as pretty high praise for a Droids episode. It's also nice to see that George Lucas had some ideas for stories, and when they flopped badly in other media, he picked them up again and tried again, with the Pod race in Episode 1.

Final Words : Something I haven't mentioned, and I do quite like in these episodes is the way that we're being allowed to discover Roon. It's a world unknown to Mundo and the Droids, and we're learning about it along with the heroes. And the fact that it's manages to exist within established Star Wars norms, while still being different enough to provide moments of surprise, is a pleasant surprise.