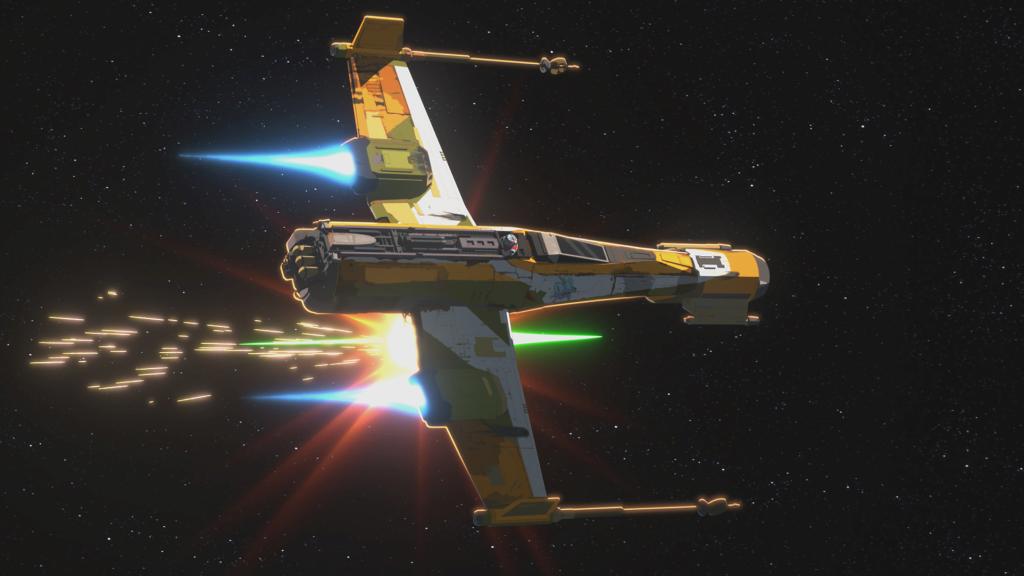 What is it ? : The Colossus is under attack, the Aces skirmishing with First Order Tie Fighters, and the station itself taking a battering from the First Order's Resurgent-class Star Destroyer. Everyone is wondering why Captain Doza doesn't order the retreat, meanwhile on the bridge of the Colossus, Doza sighs and asks where she is.
As the shields drop to 5%, he orders that the Ace's be retrieved and they flee into Hyperspace.
Just as they jump out, an X-Wing hyperspace jumps in, and is caught in the Star Destroyers tractor beams, and the pilot, a woman, is caught and put in the cells, and her Astromech is deemed to be sabotaged and non functional.
Afterwards, when the Ace's are being critical of Captain Doza's commands, Torra tells them they have no idea what her family has sacrificed, and she leaves.
Tam sees the prisoner taken through the ship, and thinks she recognises her, visiting the holding cells to try to work out who she is. The Prisoner knows Tam, and urges her to return to her friends on the Colossus, revealing her identity to be Venisa Doza, Resistance agent and Torra's mother. But as they talk, Venisa's Astromech, which had only been pretending to be sabotaged, sneaks up behind Tam and stuns her.
On the Colossus, Neeku helps Kaz identify that Captain Doza and Torra behave oddly on this day each year, having previously snuck off the station to destinations unknown. And Kaz determines that they have been working with the Resistance and barges into a meeting to tell them he is willing to use his contacts to help them contact the Resistance, only to be told that it is Torra's mother specifically that they have been meeting with.
Venisa leads Tam through the Star Destroyer, but is ambushed by Jace Rucklin, and uses his friendship with Tam to stop him firing on them, sealing him behind a blast door so they can escape. Tam and Venisa debate about the corrupt New Republic, and the violent ways of the First Order, with Venisa telling Tam that exterminating world isn't winning, and they soon arrive at a hangar bay.
Aboard the Colossus, Kaz catches Torra about to take her ship and sneak off to help her mother, offering to help. But Torra says her mother probably doesn't even need her help, she just wanted to see her because it's her birthday, the one day her family used to have together.
Venisa tells Tam that she is fighting to make the galaxy peaceful for her daughter to grow up in, and that's something she'll never stop fighting for, and stuns Tam, convinced that she's gotten through to Tam in some small way. Her Astromech sabotages some supplies, causing an explosion, which provides a distraction for the Droid to sneak aboard a First Order Tie Fighter, which causes all of the Stormtroopers to shoot at it, causing it to explode just after it exits the hangar, however the Astromech jets free using it's thrusters.
This allows Venisa to board her X-Wing, and launch from the Star Destroyer, getting her Astromech on the way, and make the jump to Hyperspace.
Aboard the Colossus, the Ace's celebrate Torra's birthday, and Captain Doza returns to his office to watch a recording of his wife and is joined by Torra, who tells him that she misses her mother, but knows that the galaxy needs her at the moment, but at least they have each other.

High Points : A solid, action packed episode of Resistance, and one that differs from most because it focuses on a character outside the main cast. And Venisa is a pretty good character, although perhaps a little too perfect and saintly. But I can't help but think that Resistance may have been a better series if it had focused on her all along.
She's a competent character with a dry sense of humour and a good set of morals, everything a hero should be. in fact the only thing I don't like about her, is the tendency of her and her Astromech to discuss previous adventures we haven't been witness to, for example when the Astromech suggests a particular plan, Venisa comments, "oh, just like we did on Bakura", which just makes me want to have seen that other adventure.

Well the episode begins the attempt to redeem Tam as a character, pointing out everyone can make mistakes, and does a decent job of it, even managing to bring Jace Rucklin along a bit, leading me to think that both characters may make an escape from the First Order before too long. Just a few episodes ago I thought that Tam was irredeemable, but I have to say that this episode has turned me around somewhat, which is a pretty amazing task for them to do it with a character as inherently unlikable as Tam.

Low Points : While an overall good episode, I have to say that Resistance continues to target it's child audience a little too strongly, with the Birthday party for Torra being fairly ridiculous that it should matter to these seasoned warriors, and just instead points out that they're taking a kid along with them on missions, as Torra doesn't seem to be an adult from the way she's portrayed in this episode.
I was also annoyed that during this scene, that the grizzled, ex-Tie fighter pilot Griff Halloran ends up being the butt of a joke as the Gorg that they've baked into a cake (although it looks like Jelly to me) jumps on his head and he thrashes around the room trying to dislodge it.

So what do you really think ? : Back on form for this season of Resistance, an enjoyable episode, which may be another sign of the flaws of this series, as most of it focuses on a character normally not in the series.
However, given the progress that character makes to redeeming Tam, a character I've pretty much hated since the start of season 1, I've really got to praise the writing and the progress the series has made.

Final Words : Well, next episode is "The Voxx Vortex 5000", where the Ace's return to their trade of racing, presumably to earn some much needed money or aid for the Colossus.
I wonder what the publicity of appearing in a race will do for the secrecy of avoiding the First Order, or whether the series will just gloss over that?