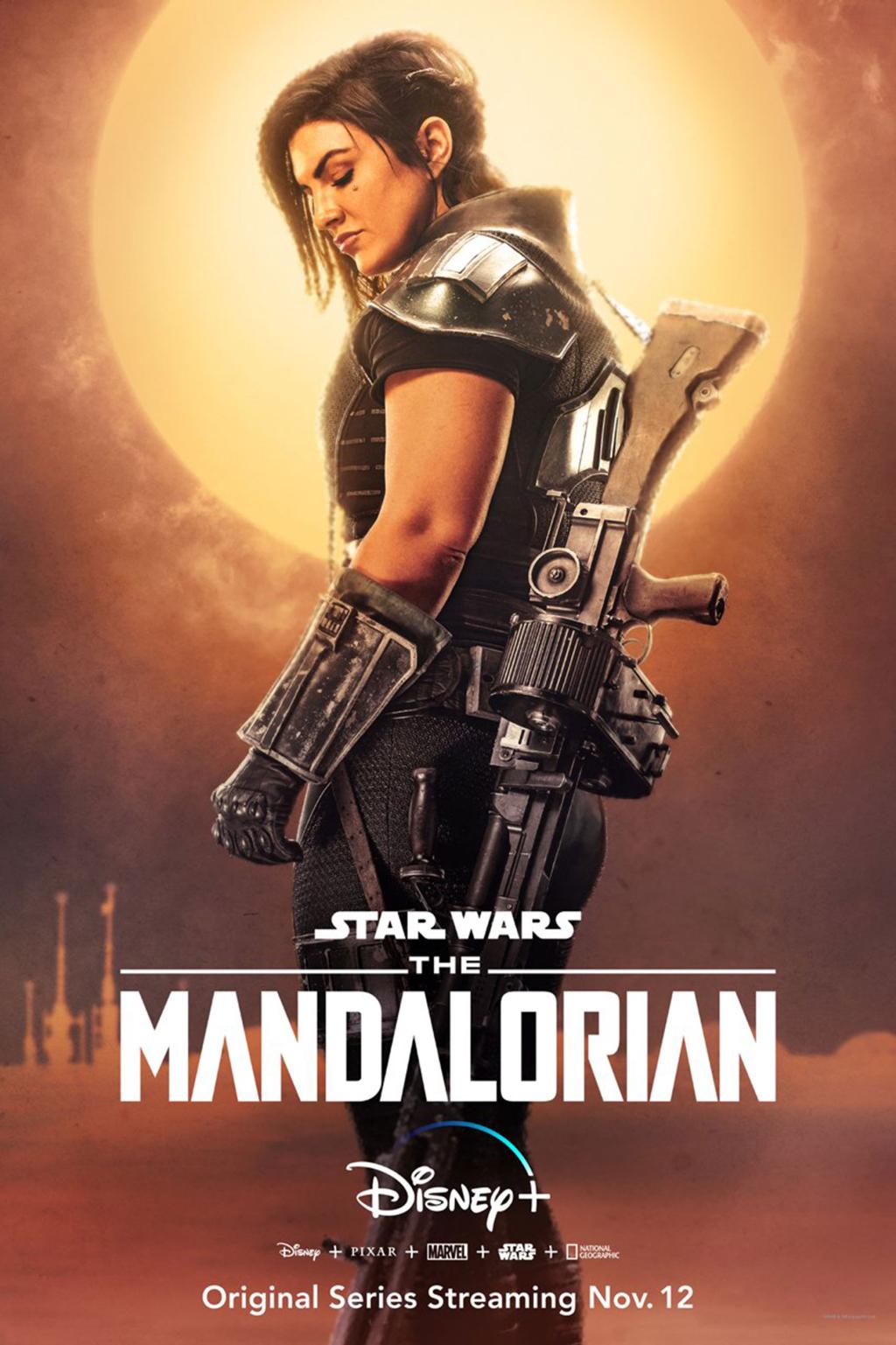 What is it ? : The episode begins with some villagers harvesting shrimp coming under attack by a group of Klatooinian raiders, the villagers flee except for a single mother and her child who instead hide beneath a basket and wait out the raid.
Meanwhile The Mandalorian and The Child arrive on a planet which the Mandalorian deems to be far enough away from everywhere to hide out, he asks the child to remain but when it follows him he grudgingly allow it. They enter a Cantina, and the Mandalorian orders the child some soup, spotting an obvious offworlder nearby who mysteriously leaves, so pays the staff to keep an eye on the child while he follows.
Using infra red to track the offworlders footprints, he tracks them only to walk into an ambush where he and the female offworlder fight, eventually ending up drawing their blasters in a standoff, only to realise the child is sipping it's soup and watching.
Inside they talk as the child eats, with the offworlder identifying herself as an ex-Rebel shock trooper named Cara Dune. She abandoned her position after the Battle of Endor as she didn't agree with the peacekeeping role she was being forced into, protecting delegates, suppressing riots. She tells the Mandalorian that she though he had been sent to collect the bounty on her, but that she found this place to hide first, so he needs to find somewhere else.
He returns to his ship to begin prepping to leave, when he is approached by two villagers from the village at the beginning of the episode, they offer him a pittance to protect their village from the raiders, which he turns down until he realises that their village is in the middle of nowhere and is the perfect place to hide out.
He approaches Cara Dune and informs her of the situation and the seclusion of the village and she joins him as they travel there. They get put up in comfortable but primitive huts, where the mother from the beginning of the episode , Omera, makes them comfortable and asks the Mandalorian about his helmet and how long it has been since another person has seen his face, and he tells her that he was just a teenager, and that he follows the rules of the Mandalorians because they took him in after his parents were killed and no one else would.
Omera leaves him alone so he can remove his helmet to eat, and as night falls he and Cara leave to scout out the raiders, discovering the footprints of an AT-ST.
They return to the village to warn them to leave, as neither of them is equipped to take out a Scout Walker, but the villagers are set on remaining, and ask for training. They begin training the villagers, and only Omera turns out to be an accurate sharpshooter, as they also prepare the villages defences to force the raiders into entering through a single defensible point, where a pit trap is set up for the Walker.
When everything is ready, The Mandalorian and Cara set off to enrage the raiders and force an attack on the village, sneaking into their camp and setting explosives before they are discovered and enter a brawl with the raiders. When they become pinned down, the Mandalorian shoots a hole in the side of the shack they are in, and they escape, being chased by the Raiders and the Scout Walker whose viewports are illuminated a menacing red colour.
They flee back to the village, and the defence goes well, except that the Scout Walker remains outside of the village firing in, and therefore not triggering the pit trap. Cara sprints out, taking the Mandalorians rifle to lure it in, and at much risk to herself she manages it, collapsing the Scout Walker and allowing the Mandalorian to hurl explosives in through the viewport, destroying the vehicle.
With the walker destroyed the raiders are routed and flee back into the forest.
The episode picks up some weeks later, Cara and the Mandalorian have been living peacefully in the village, with Cara urging that this is a perfect place for him and The Child to settle down. He agrees for the Child, but has decided that his presence will just attract danger, so he approaches Omera to explain. She tries to urge him to remain as well, trying to remove his helmet to get him to abandon the Mandalorian ways and settle down with her.
As they speak, a sniper with a bounty tag which has led him to the village prepared to shoot the Mandalorian as his helmet is removed, however when he refuses, the sniper instead targets the Child, but a shot rings out, and Cara has killed the assassin.
The Mandalorian realises that the Child will not be safe here, so they load up once again and leave the village, with the Child looking sad at leaving the other children of the village he has been playing with behind.

High Points : I cannot throw enough compliments towards this series, this is just another absolutely amazing episode. My family compared it to the Magnificent Seven, but of course with my Lone Wolf and Cub comparisons from previous weeks, I'd compare it to the origin of that story, The Seven Samurai.

The battle with the raiders and Scout Walker is amazing, and keeps the tension up, with the Scout Walker seemingly being piloted by someone cautious of traps, so remaining outside the village until he is lured into the pit trap and the vehicle crashes to the ground.

And that's just the finale of the episode, there's just so much humour and heart to the episode before that, with the scenes in the bar and the village as the Child finds a home. Which makes it only more heartbreaking when the active bounty on the two, force them to leave at the end.

And the Child himself, is just so darn cute. I watched the episode with my wife, who must have said at least 50 times that she wants one, although I remain unsure if she means a real one or just one of the toys which surely must be available this christmas.

Low Points : I was going to complain about the red lighting inside the Scout Walker, and the way it makes the viewports on the front look like demonic eyes, but it looks cool, and the way that it's see through the trees as the walker approaches the village is just menacing and amazing. And as my son pointed out, the raiders probably just installed their own mood lighting when they stole the walker.

Which therefore leaves my only complaint being the fight between the Mandalorian and Cara when they first spot each other is really pointless, although the way it ends with them each noticing the Child watching them while eating his soup is amazing.

So what do you really think ? : This is a fantastic episode, and while I wouldn't really describe the battle as epic, it's really well realised, and only doesn't meet my criteria for epic because it is a much smaller battle than we've seen in the movies, but is definitely as well realised.

Final Words : I have to complement the direction of the episode by Bryce Dallas Howard, the daughter of Ron Howard (who directed Solo: A Star Wars Story), therefore making directing Star Wars a family thing, and probably she is best known as the female lead in the Jurassic World movies . . . Yes the one who manages to outrun a T-Rex in heels.
She has totally exceeded my expectations, as for some reason I thought that the episode she directed would be one which dealt with the characters more and the situation they've now found themselves in, which the episode does explore, but instead she's directed the episode with the biggest action scene we've seen so far in the series.

Well, next episode, directing duties return to Dave Filoni, who hasn't directed one since the pilot episode, so looks like we remain in safe hands.