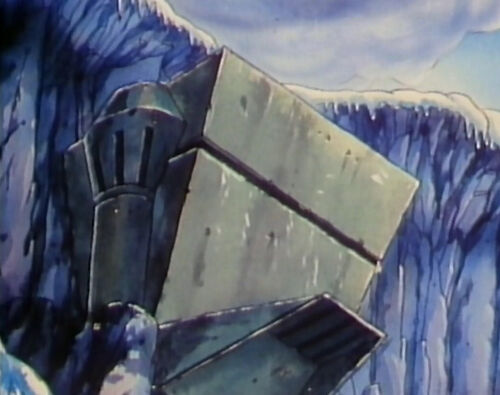 What is it ? : Mungo Baobob, C-3PO, R2-D2, Auren and Nilz Yomm ride some Rockhoppers to the top of a nearby mountain to observe the course of the Rainbow Comets. They have orbited Roon, and are about to leave the system once more, which will provide a way for Mungo to leave Roon once more through the surrounding asteroid field.
Meanwhile in an effort to gain the favour of Admiral Screed and the Empire, Governor Koong releases Rooze Disease, a plague the Empire used in the Mavvan Conflict, but turned out to kill as many Imperials as it did enemies, so was abandoned as a weapon. However there is a leak in the storage tanks, and Koong and Gaff are exposed, although it turns out Gaff's species is naturally immune.
Auren and Nilz, seeing their home and valley immersed in the toxic cloud of plague, are immediately concerned about Auren's Mother, Bola, but know that getting infected won't help anyone so wait for the cloud to clear, and head down later to find Bola alive but very much infected with the disease, which will just lead to her fading out of existence in it's final stages, so Nilz will work on a cure.
However, Koong is aware that Nilz is his only hope of a cure, so sends Gaff to capture him and he also captures Auren as a bargaining chip.
Having planted a trackable token on Auren, Mungo and the Droids follow, taking a shortcut through the volcano, where they discover a magic mirror, which allows C-3PO to translate the markings on one of the items that Mungo's uncle had left him, which informs them that the Roonstones are in the walls of Koong's Citadel.
R2-D2 falls into the mirror and is reduced in size, allowing him to slip into the Citadel and secure disguises for C-3PO and Mungo.
As Nilz completes the cure, Screed is prepared to abandon Roon as it is worthless to him without the Roonstones, and Mungo reveals himself, offering the Roonstones location in exchange for the Empire leaving Roon in peace. Koong reacts badly, shooting one of the walls and causing Roonstones to be released and fall into the Volcano freezing it, and Mungo and the others realise without the heat of the volcano, the citadel will freeze solid. Koong succumbs to the disease and fades away, and everyone else flees the citadel. Gaff attempts to stop them, but R2-D2 knocks him over, causing him to poison himself with his own toxic barbs, as Mungo, Auron, Nilz, C-3PO and R2-D2 steal back Mungos original ship.
The heroes return to Bola and give her the cure, healing her, and Mungo prepares to leave, his quest a failure, however, R2-D2 now restore to normal size discovers something blocking one of his circuits, which is revealed to be a Roonstone, and Mungo wishes the droids goodbye, promising to return one day, as the droids will be needed to rebuild Roon, and he blasts off into space.

High Points : Well I suppose the episode does draw together a lot of plot lines from earlier episodes, we get Gaff poisoned by his own barbs, more items from Mungo's uncles pack, but things have gotten confused somewhere along the line. So it's all a bit of a jumbled mess where things happen without any reasonable explanation.

Low Points : Speaking of the jumbled mess, I've got a huge bunch of questions, like why do the Roon Stones have magic ice making powers now, when before they just seemed to be valuable crystals?
Why are all of the Roon stones buried behind the walls of Koongs citadel, and he doesn't know?
How did a Governor from a world supposedly isolated from the rest of the Galaxy manage to get his hands on a failed experimental Imperial bio weapon?
Why didn't C-3PO translate the symbols on the pyramid from Mungo's uncles pack when they were simply reversed and just needed reflecting in a mirror?
Why is there a magic mirror which can shrink things down hidden in a volcano?
What does Screed do next, now he knows exactly where all the Roonstones are (because the episode leaves it as if he's just leaving the planet as useless)?
Why is Rooze disease called a disease, when it doesn't seem to infect anyone except when they're directly exposed to it?
How does Rooze disease manage to make people fade from existence part by part?
Is Mungo returning with trade, as his mission wasn't to locate the Roonstones as the series seems to think, but actually to open up a new trade route for his fathers company?
Gaff's barbs paralyse not kill, so what happens to him when he recovers, or does he freeze to death in the citadel?
When they were introduced, Nilz and Auron were running a Rockhopper racing team, but now Nilz is the planets supreme biochemist and doctor, really?

So what do you really think ? : This episode was a mess, and while it's gotten away from endless scenes of C-3PO falling over and showing his bottom, it leaves me with far too many questions for me to recommend it to anyone.

Final Words : Well, that's the end of droids . . .
Except it isn't, because they also created a feature length episode explaining how C-3PO and R2-D2 met Mungo Baobob, The Great Heep! Which I've heard is the best of the Droids series, so is there a gem to come, or will it be just as big a disappointment as the rest of the series?