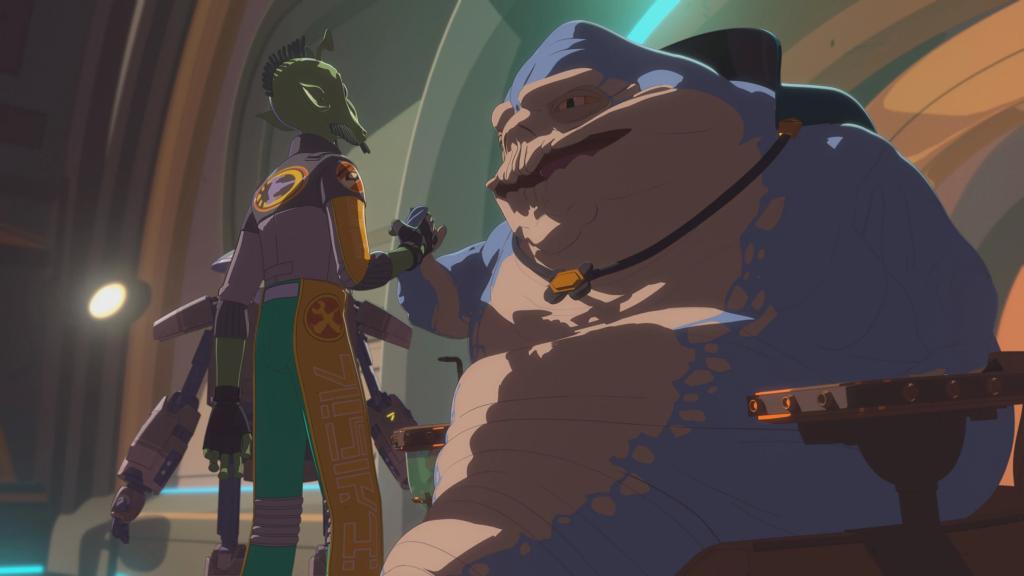 What is it ? : Hype Fazon approaches Captain Doza about stopping boredom within the Aces, and making some money for the station, and suggests that they go to a nearby station to take part in the races there and gamble on the results.
The head to the station and find it is run by a Hutt who Hype used to work for, Vranki the Blue. He offers Hype the chance to race across an asteroid field, in exchange for working for him if he loses, during the race the other racer reveals itself to be a droid, which sabotages his fighter by docking onto it, causing Hype to lose.
Neeku discovers that the droid brains are hooked into the gaming machines in the casino, and all are rigged, so Kaz asks him to hack the systems to rig it in their favour.
Captain Doza wants no more of this, but finds exit blocked by a couple of hulking Kowakian Ape Lizards. So Freya races next, but Vranki uses mines within the asteroid field to cause her to lose, and when Griff tries, turrets are activated within the field, which cause him to lose as well.
With only Kaz and Torra left, they gamble not only their service to Vranki, but also the entire Colossus, which he accepts as part of a tag team race. Torra starts, and the Droid starfighters open fire on her, cheating, meaning she tags Kaz far later than the droids tag.
Kaz uses a shortcut around a turn to beat the droids, but Vranki activates turrets on the final race ring to try to destroy Kaz, but Neeku hacks the system and deactivates them, allowing everyone to leave with their winnings.


High Points : I actually kind of hoped that going back to racing would be interesting for the Aces, but this episode really doesn't do anything much with it. With the Hutt cheating every race, apart from Kaz taking a shortcut during the final race, we don't see the heroes coping with this particularly well, and the idea of these "Aces" getting beaten in races by what seems to be the droid brain from a Trade Federation Vulture Droid Starfighter, makes them look very poor indeed.

Low Points : So, Vranki gets the droid starfighter to open fire on them, and these now seasoned combat pilots don't shoot back. In fact they don't try anything except flying fast in a fairly straight line.
What I wanted to see was them trying something off the wall and interesting to show that these "Ace" pilots were inventive and skilled pilots. I wanted them to abandon the race, and target Vranki to make him declare them the winner, or to shoot down the droids when they take first place (the advantage in an armed race to being in second position is that your enemy is in front of your guns). Or for them to blow up the race ring before the droid could go through it. To threaten Vranki with the Colossus's weapons, or do something than one by one make themselves slaves of this cheating Hutt.

Also, what the heck is going on with Vranki's employees, who all seem to be Kowakian Monkey Lizards and Kowakian Ape Lizards (as his bouncers and bodyguards). Are Kowakians intelligent or not? We've seen them as somewhat trainable beasts in the past, smart pets. But here a group of Monkey Lizards notice Neeku hacking their systems and attack him, and the doormen Ape Lizards respond to Vranki's hints that his guests shouldn't leave, showing they have an excellent grasp of standard and it's subtleties, which would make them somewhat smarter than Gamorreans.

So what do you really think ? : Oh dear, Resistance isn't just treading water, but it's back to the bad old days of the first season. Tension could definitely have been added by Vranki selling out the location of the Colossus to the First Order, so the heroes are in a desperate race to escape. But nope, just a scene where Neeku struggles with some Kowakian monkey lizards and a fade to black.
We could have had an interesting encounter with loads of aliens gambling on the races, seeing species we've seen in the movies before and perhaps recognisable characters from the racing episodes of the 1st season (Greg Proops racing commentator for example). But nope, we've got a single Hutt who speaks through a throat translator, his droid sidekick and some Kowakian Monkey and Ape Lizards.
So even though the idea wasn't great to start off with, they totally wasted away any hopes of a good story.

Final Words : So next episode we've got "Kaz's Curse", where Kaz is cursed by a pirate and has to get help removing the curse.
Sigh, this really sounds like a first season episode, oh dear.