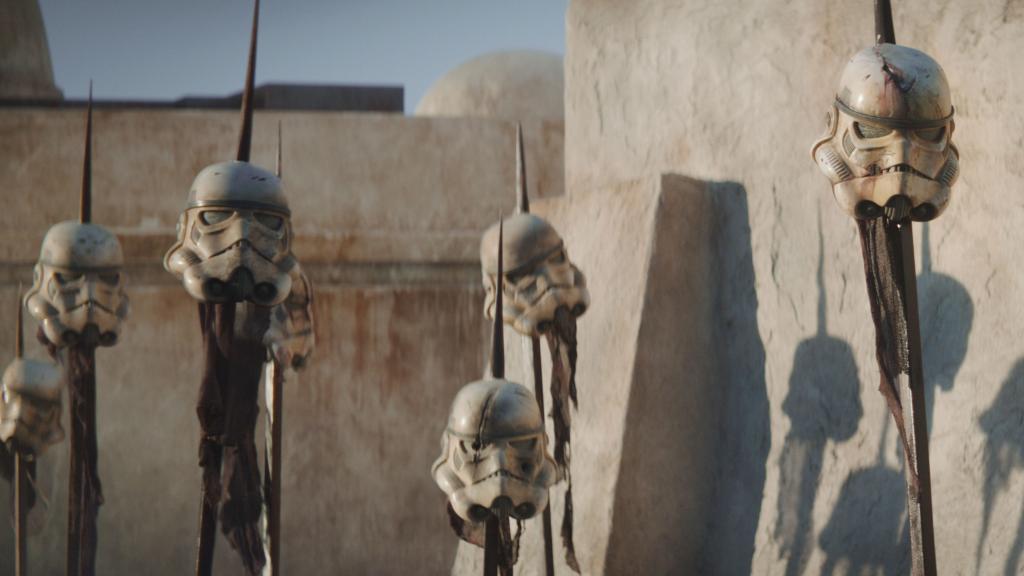 The Mandalorian: Chapter 5: The Gunslinger

What is it ? : The episode picks up with The Mandalorians ship, the Razor Crest, involved in a battle, a starfighter is attacking, and damages one of the two engines before The Mandalorian throws the engines into reverse and drops behind the enemy and destroys them.
He contacts nearby space control and gets clearance to land for repairs at Mos Eisley on Tatooine, where he sets down in a docking bay and chases off the pit droids which come to repair his ship. He tells the owner of the bay, Peli Motto that he doesn't want droids working on his ship, which she tells him will cost more, and he sets off to find work to pay for the repairs.
Peli Motto discovers The Child aboard the ship, and although honestly caring for the infant, she begins to work out how she can profit from caring for it for the Mandalorian.
In a Cantina, The Mandalorian meets Toro Calican, a young bounty hunter looking to make a name for himself by capturing Fennec Shand a human Assassin and Mercenary. The Mandalorian deems her to be out of the neophyte bounty hunters abilities, but accepts a deal where he takes all the payment, but Toro takes the fame to build his credibility.
He returns to the docking bay, and leaves the Child officially in Peli's care, before Toro arrives with Speeder bikes and they head off into the desert, needing to cross Tusken Raider territory, the Mandalorian makes a deal with the Raiders to allow them to cross, and they soon discover another dead bounty hunter, and fall into Fennec Shands trap where she uses a sniper rifle to shoot at them from a distance. Using flares to blind her, they race towards, and although the Mandalorians Speeder bike is destroyed Toro closes the distance and engages her in hand to hand combat. Which allows The Mandalorian to get the drop on her with his blaster.
Needing transport to get their prisoner back to Mos Eisley, the Mandalorian sets off to capture a Dewback, but Fennec tells Toro of the value of the Mandalorian and the Child, seemingly coming to a deal with him, but he guns her down, planning on taking the entire value of the Mandalorian and becoming a legend in the bounty hunters guild.
When the Mandalorian arrives back, Toro is gone, and Fennec's body has been left, so he returns to Mos Eisley and his ship, only to discover that Toro has taken Peli and the Child captive and calls on the Mandalorian to drop his weapons, but the Mandalorian uses one of the flares to blind Toro, and give him the opportunity to gun the man down.
He passes the money from both Toro and Fennec to Peli, and departs aboard his ship once more, while Peli instructs her droids to dump Toro's body in Beggars Canyon.
Meanwhile a mysterious figure arrives at Fennecs body, as the credits begin to roll.

High Points : Another excellent episode, and although it would be easy for the visit back to Tatooine to be fan service, it didn't seem overdone to me, and just felt like a return to somewhere familiar. The Cantina feels like the Star Wars cantina, with various strange aliens appearing in it, we see WED Treadwell droids, Pit Droids and Dewback.
Even the appearance of the Tusken Raiders is done brilliantly, as we get to see the Mandalorian trade with them in exchange for access to their lands, a side we've never seen to this race before (and as someone who plays a Sand Person in the RPG, I really wanted to see how much this was going to destroy what I've done with the race, but it looks like I've been on safe ground).

I've got to complement the casting in the series as well, a nearly unrecognisable Amy Sedaris plays Peli Motto, and while I worried for a moment on spotting a brilliant comedy actress appearing that they'd make it too much of a joke, I have to say she did a fantastic job. And we also got the amazing Ming-Na Wen of Agents of Shield fame, who was also stunning, although was playing very much to type.

Low Points : I've mentioned above that the visit to Tatooine could have come across as pure fan service, but didn't seem overdone to me, and for the whole it didn't, using ED Supervisor droids working in the Cantina, droids I recognise from Jabba's palace, was fine, seeing the Cantina and Mos Eisley was all fine.
However, the appearance of R5-D4 just was too much for me. The Red Astromech that Uncle Owen purchases in A New Hope, which blows it's motivator and allows R2-D2 to stay with C-3PO and complete his mission to find Obi Wan Kenobi appears in the Cantina, and it just made me cringe a little inside as I realised they'd crossed a line too far.
But that was the only moment for me, if they'd had them buy Lukes old Landspeeder, or pass Bens old hut, I'd have cringed too, but they didn't, so I was fine. However, I did feel a momentary cringe again right at the end of the episode when Peli tells her droids to dump Toro's body in Beggars Canyon. It was just too familiar, and led to the universe feeling just a little too small.

But these are minor criticisms in an overall fantastic episode.

So what do you really think ? : Another amazing episode of The Mandalorian, which means even if the rest aren't great, we've had over half the series be amazing.
This is definitely the Star Wars I've been waiting for, fantastic stuff.

Final Words : Next episode the Mandalorian joins a group of dangerous mercenaries, and I seriously hope we don't get a repeat of this week with them turning on him, but repetition isn't something we've suffered from in this series, so my hopes are high.