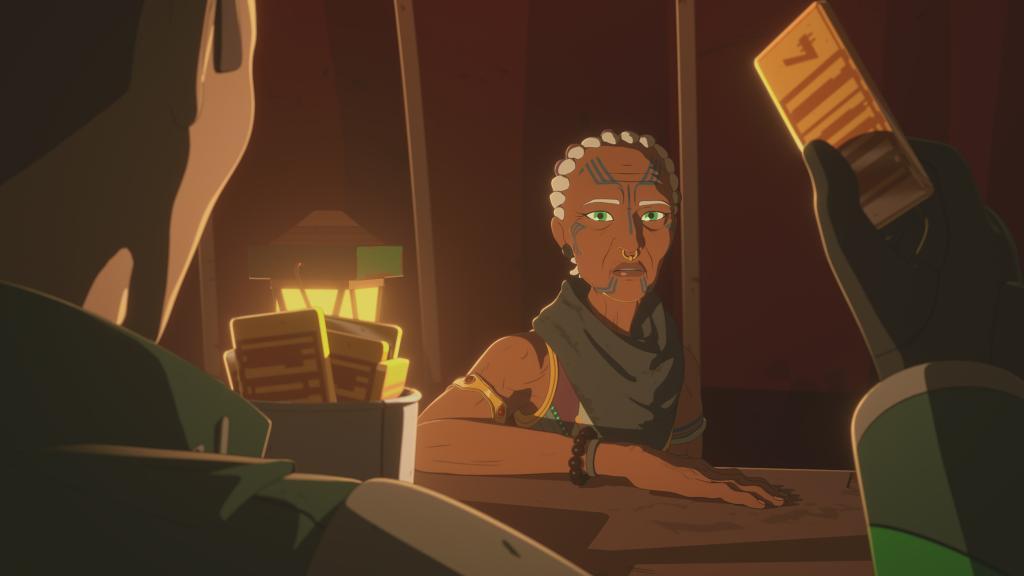 What is it ? : Kaz is gambling with some of the pirates and is on a winning streak, when they'd got him marked as an easy target as he'd never played before. After one final win, one of the Pirates takes offence, and places a curse upon Kaz, something Neeku takes very seriously.
As Kaz and Neeku leave, lights begin to spark and short out, something which the superstitious Neeku thinks is due to the curse, and Kaz seems to be followed by a series of misfortunes.
Captain Doza calls for the Ace's, and explains that the Colossus is about to pass through an Asteroid field owned by the Guavian Death Gang, and he needs the Ace's to scout ahead and intercept and stop any of their fighters reporting the Colossus's location.
As they scout ahead, Kaz's Curse seems to strike, as he spots a Guavian Scout, but malfunctions on The Fireball mean they get away and the Colossus's location is discovered.
Everyone blames Kaz for not stopping the scout, but Neeku blames the curse, so Kaz asks the pirates to remove the curse, but knowing it's not actually real, they make him the butt of their joke, by double cursing him. So he visits Mika Grey, who tells him that the curse isn't real, but just in his head, but when he insists, she sells him a small wooden idol which she claims will stop any curses affecting him.
The Guavians arrive in force, so the Ace's scramble to defend the ship, but in the rush, Kaz leaves the idol behind.
Kaz's curse seems to take hold, especially when he realises that he doesn't have the idol, but he tries to take into account what Mika had told him, and he changes his luck, helping the Ace's hold off the Guavians and allowing the Colossus to escape the asteroid field, and jump to hyperspace as soon as the Ace's are aboard.
Back on board he gives the idol to one of the Pirates, telling them he got it from Mika and he's heard it's cursed, and the Pirates panic as the lights flicker and one of them finds a gorg in his soup, and Mika asks him if he survived his curse, to which he replies it was all in his head.

High Points : I'm struggling once again to find anything I liked about this episode, and I suppose at least we see a bit more about the Guavian Death Gang, seeing their ships for the first time. But there's not much here, apart from knowing they stake out Asteroid fields to ambush travellers and hold them to ransom.

Low Points : Well, we're not only back to Kaz being incompetent, but with a curse he's doubly so. With things almost falling on his head, lights around him failing, and the Fireball malfunctioning.
Which bring to mind, when did the Fireball stop malfunctioning? During the first season, the Fireball as basically a deathtrap, named after it's habit of bursting into flames. But Kaz has been using it reliably throughout season 2 as his Starfighter, which to me again proves that Kaz seems to be a far better mechanic than Tam ever was.
But ignoring that, the particular fault that causes Kaz so many problems in this episode is when his seat begins moving upwards (possibly inflating) and squashing Kaz against the cockpit canopy.
Now I have to ask, why does the ship have this feature? Is it the ejection system? If so, the writers have a massive misunderstanding how ejection systems work! Is it some kind of weird seat adjustment feature? If so, why does it move the seat so much upwards that the pilot is pinned to the canopy?
This makes no sense whatsoever to me.

I've also got to draw attention to the idiocy of the pirates. I can totally understand a pirate on losing a game, placing a fake curse on the winner. But later when Kaz returns, the entire ship is at threat, with the Guavian Death Gang saying they will seize the ship and sell everyone aboard to The First Order. I'd have thought that the Pirate would have realised that his freedom is at risk, and told Kaz that the curse is fake. But instead they decide to double curse him just for the Lolz when it's well known he's one of the few pilots fighting to keep them free.

So what do you really think ? : A terrible, terrible episode. While there's been a few good episodes lately, Resistance doesn't seem to be able to avoid the low quality storytelling and characterisation of the first season. Which is kind of sad, as it was really showing some promise.

Final Words : Well hopefully we see something better next episode, in "Station to Station", where Kaz and Neeku sneak aboard a First Order refueling station to steal some tech, and encounter Tam and General Hux.
Which since it's not Captain Phasma, I guess we've moved beyond her death in the timeline. But I'm still surprised they're not trying to use equally shiny villain, Commander Pyre.