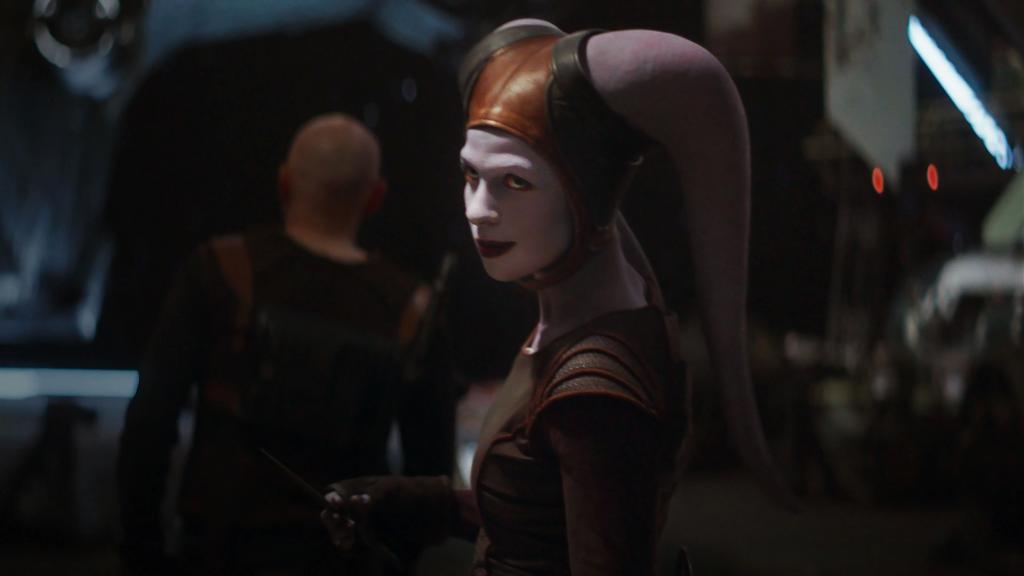 The Mandalorian: Chapter 6: The Prisoner

What is it ? : The Mandalorian arrives on a Space Station, he is met by an older bearded man, Ranzar Malk, who wishes to hire him for a mission requiring a 5 man team. The two have a history working together, but Ranzar has retired from active missions now, and introduces The Mandalorian to the team he will be working with to rescue a Prisoner.
The team is headed by a human gunslinger, Mayfeld, and they are joined by a Droid Pilot, Zero, a Deveronian muscle man called Burg, and a Twilek female named Xi'an, who was part of the team when the Mandalorian was in it, and they have a possibly physical relationship behind them.
They depart, and with Zero piloting the Razor Crest, as his reflexes will allow them to take advantage of sensor gaps in the prison ship they are intercepting. The voyage is tense, as the other Mercenaries try to bully the Mandalorian into removing his helmet, and then discover the child, but it is all ended when the ship make the rapid maneuvers and they dock with the prison transport.
They fight their way through the ship to the control room, which leads to a stand off, because the pilot is carrying a beacon which will call for a New Republic strike team to purify the area and kill any escaping prisoners. But while the Mandalorian tries to talk the pilot down, Xi'an kills him quickly with a knife, and they discover the beacon has been triggered and they only have 20 minutes until the strike team arrives.
They locate the prisoner, and unlocking the cell, the Mandalorian is surprised to see it is Xi'ans brother, Qin, who the Mandalorian left behind on a mission, and part of this mission is to get revenge for that perceived betrayal. The Mandalorian gets locked in Qin's cell, while the others head back to the Razor Crest.
Meanwhile Zero decodes a message from Greef Karga being sent to the Razor Crest and notices the child, who he decides to eliminate, but the child hides among the cargo aboard the ship.
The Mandalorian grapples one of the prison guard droids through the bars of his cell, and disables it, removing its arm and using it to open the cell door using its data probe, and heads back to the control room, where he triggers the security doors splitting the other mercenaries up.
While Xi'an and Burg head to the control room, Qin offers Mayfeld the full bounty to abandon the others. Burg reaches the control room, and he and the Mandalorian fight, with Burg proving an impressive opponent and surprisingly resistant to fire, but the Mandalorian defeats him, tracking Xi'an down next.
The two fight, and once again the Mandalorian wins, heading onwards to Mayfeld and Qin who are about to board the Razor Crest. The Mandalorian defeats Mayfeld, but Qin throws down his weapon and calls on the Mandalorian code to complete a bounty, which in this case is to take Qin back to Ranzar.
Aboard the Razor Crest, Zero finally finds the Child and as he aims his weapon, the Child lifts his hand calling upon the force when a hole suddenly appears in Zero's head. But as he drops it is revealed the Mandalorian is standing behind him, weapon raised.
They return to Ranzar, and the Mandalorian hands over Qin in exchange for his payment, and as he leaves, Ranzar activates a Gunship, telling Qin to kill him, but Qin realises that the Mandalorian has slipped the New Republic beacon into his belt, and as they watch the Razor Crest leave, they see a squadron of New Republic X-Wings arrive who proceed to cleanse the area destroying the station.
Meanwhile, back aboard the Prison ship, Xi'an, Mayfeld and Burg awaken locked within a prison cell on the prison transport.

High Points : Another great episode, although I felt it wasn't as great as the previous ones.
It improves on previous episodes by telling more of a story, where many of the other episodes just detail an encounter or extended scene or two, this tells a full story (in a similar fashion to Episode 4: Sanctuary). But with that extra story does come a bit of sag, and it does feel a little overlong and to tell the truth obvious.

But I have to say I loved seeing the New Republic making an appearance in the series, especially the X-Wing Squadron (with Dave Filoni playing the squadron leader). And the acting was brilliant, especially seeing as we got Savage Opress himself (Clancy Brown, the actor behind Kurgan, Mr Krabbs and so many others) appearing as the Devaronian Burg.

The action was overall very good, it told an interesting story, and generally kept the quality high.

Low Points : Well, for a change I'm not going to have too many problems filling this section for an episode of The Mandalorian, because not only did the episode feel like it overstayed it's welcome a little, I did find myself being too much of a Star Wars geek and picking faults with it as I watched.

For example, while I adore Clancy Brown, and he did an amazing job as Burg, I have to question his character a little. Why is he fireproof? While species variation means that a strong musclebound Devaronian can exist, in the established Star Wars background their horns are actually sensing organs, which get irritated by interference from Droid brains, so they dislike droids, which definitely didn't get portrayed here with Burg working alongside Zero without complaint (and given his personality, I find that unusual).

The signalling beacon which summons the New Republic Strike Squadron, while it makes an interesting Macguffin for the story, I do find myself seriously questioning how it works? If the prison guards trigger it during a breakout, and then regain control of the situation (for example the prisoners surrender because they don't want to die), there doesn't seem to be a way to deactivate it. And what if a prisoner took the beacon onto a passenger liner, a maternity clinic, or the New Republic Senate? Would the strike team destroy those? What's the rules here? It worked nicely in the context of the story, but doesn't seem realistic to me.

And one final thing, what's with the security droids aboard the prison ship, some of them looked like what we've known as R1 Astromech droids, but are shown to have weapons? In universe, the R1 was supposedly put inside the casing for a Reactor Drone, so has the casing been reused? Are they arming old Astromechs?
While I liked seeing them again (one can also been seen in the background of the Jawa Sandcrawler in A New Hope, so the design has been around for a while), I'd definitely have prefered them just to be R1 Astromechs, rather than another reuse of the design (or is it another Star Wars Retcon?).
This is something that Pablo Hidalgo never let happen in the animated series, but doesn't seem to be getting done in The Mandalorian.

So what do you really think ? : I enjoyed this episode, although get a feeling the series is moving towards it's conclusion as it kind of felt like it's losing steam a little.
But don't get me wrong, this was a solid jailbreak story, with a fairly obvious betrayal along the way. But seeing the Mandalorian deal with this betrayal was most of the fun of the later part of the episode, along with much fun with Zero (voiced by Moss from the IT Crowd actor, Richard Ayoade) and the still super cute Child.

Final Words : Well, 2 more episodes of The Mandalorian to go, and unless it messes up seriously I think the series can definitely be judged as a massive success based on what we've seen.
It's a great series, really fleshing out part of the "official" continuity we're not really that aware of, with excellent effects and action, and some wonderful actors who are proving to be an absolute delight to watch.
Well, next week, "an old rival extends an invitation for The Mandalorian to make peace", which I'd guess means that Greef Karga will be making an appearance and we're going to return to the main storyline of the series about the origins of The Child and it's importance.