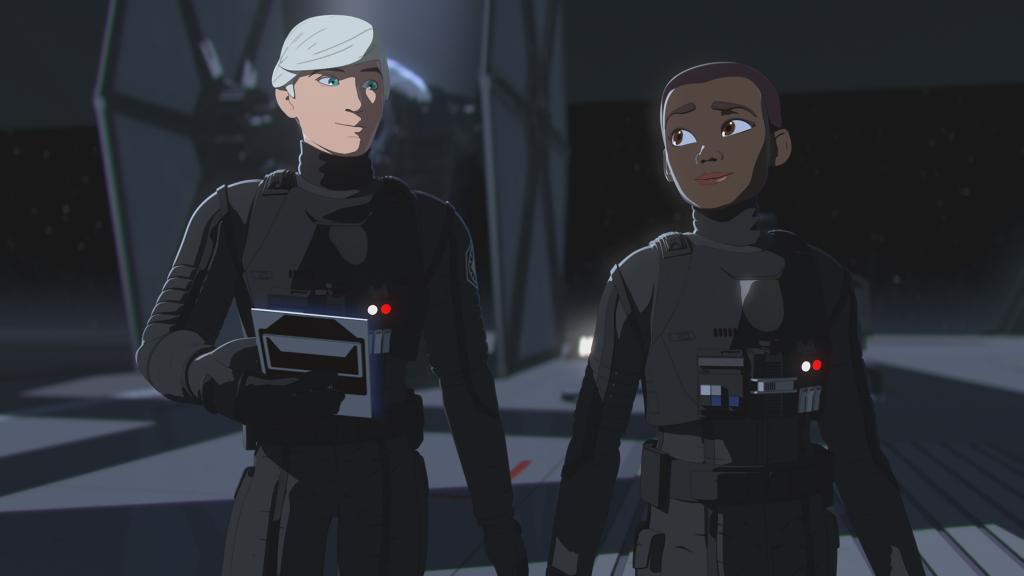 What is it ? : Jace Rucklin and Tamara Ryvora are refueling Tie Fighters aboard the Resurgent Class Star Destroyer where they are based, when they are assigned a mission to escort Commander Pyre to a refuelling station called the Titan, where he is to attend a meeting. They have been selected for this mission due to their familiarity with refuelling stations.
As they arrive, they discover that the station is a duplicate of the Colossus, and when they board Tam bumps into a technician who mumbles an apology, and as he slips out of sight Tam thinks that it was Kazuda Xiono.
Kaz reaches his friend, Neeku and tells him that Pyre, Tam and Rucklin have arrived and may cause problems with their mission to retrieve a Trans-binary deflector, which is failing aboard their station and without which everyone will perish from cosmic radiation.
As they speak a lost General Hux and escorting Stormtroopers arrive, and command Kaz to take them to the tower briefing room, which he does leaving CB-23 and Neeku to find an access point into the Titans computer systems.
Kaz takes Hux into a turbolift, where he overhears them saying that they are going to destroy all of the refueling stations they cannot capture. He narrowly avoids being spotted by Commander Pyre, and watches as they all enter the meeting room.
Meanwhile Neeku is spotted by some Stormtroopers who demand his identification, but as he stalls Kaz returns, showing them the part that he claims they're going to install and talking about its functions and features, and the Stormtroopers lose interest and leave.
CB-23 retrieves the location of the Trans-binary deflector, and Kaz and Neeku head to the engine room to retrieve it, which sending CB-23 to the hangar to prepare their ship for leaving.
Jace and Tam have collected some supplies to take back to the hangar, and as they push their hoversled, Tam overhears two Stormtroopers discussing the technician and his Nikto colleague, and she heads off to investigate, meanwhile Jace spots and recognises CB-23, and investigates where he has come from.
As Kaz and Neeku prepare to remove the part they need, Jace enters the room and recognises Kaz, calling for security and sealing the two within the room.
The alarm blares and interrupts the meeting with Pyre and Hux, where they are discussing hunting down and destroying all the resistance cells, and alerting Tam to something going on. She activates a viewscreen and sees the trapped Kaz and Neeku, overhearing their conversation about everyone on the Colossus going to die without this part, she releases the locks on the engineering deck, allowing the two to escape.
Reaching the hangar with the Trans-binary deflector, the two realise their way is blocked by Stormtroopers, and board a cargo container and ask CB-23 to use a crane to move it past the Stormtroopers closer to their ship, which he does.
However he is spotted by two First Order Astromechs who begin fighting him, causing the cargo container to freeze and the Stormtroopers to spot Kaz and Neeku.
A firefight breaks out, but Kaz, Neeku and CB-23 manage to sprint aboard their ship and take off.
Meanwhile, Jace boasts to Tam how he trapped Kaz and Neeku in engineering and how it will lead to him being promoted to Commander, but Tam sarcastically tells him his promotion is leaving as she watches Kaz's ship jump to hyperspace.
General Hux berates Commander Pyre for letting the Resistance agents escape. After Hux has left, Pyre contacts Agent Tierny via holoprojector and informs her that Kaz acquired a binary deflector and escaped capture. When Tierny asks if Tam contacted the spy, Pyre says that she was with Rucklin, who turned them in. She says that if they play it right, Miss Ryvora will help them to destroy the Colossus.

High Points : We get to find out that the refueling stations are apparently a common design, and that part of their plan to conquer the galaxy the First Order is going to capture or destroy all of them, restricting galactic access to fuel. Which actually makes a bunch of sense.

Low Points : So they need a Trans-binary deflector or everyone aboard the Colossus will perish, would be nice if we'd heard about it before, but at least they repeat this tale several times during this episode, especially so that Tam can overhear and have a change of heart about killing those people she's already tried to kill a couple of times already. Because it would be terrible if they died because of an accident instead of at the hands of the First Order.

And where did Kaz and Neeku get a First Order AAl transport? We've seen them using Star Commuter Shuttles every time they've needed to leave the Colossus in the past, so when did they get this ship? (If the writers were good at planning, they could have had them take the one that the First Order arrived in during "The Relic Raiders", but they didn't).

Oh, so Tam is now getting a change of heart! But the fact that it seems to be motivated by the fact that she's getting given boring missions such as refuelling Tie Fighters and wishes for the more interesting work she did aboard the Colossus, makes her seem just as self interested as she always has. Sorry not buying this redemption story at all.

Oh, and the voice actor for General Hux isn't Dominic Gleeson, and it's obviously not him, so much so I spent much of the episode wondering if General Hux had a brother who was also a General that was this character, as he didn't even appear visually the same.

So what do you really think ? : With no lead in to this episode, and just dumping us into the action, all of the treading water that Resistance has done lately just annoyed me more. They could have had some build up to this mission, with the part breaking and the danger to everyone being introduced (why is everyone going to die of radiation?, are the engines leaking it? Is it cosmic radiation? Are they having to hide close to a star?, all perfectly good reasons which would have increased the tension, not just been a macguffin to move the story along). Have them stealing the ship, steal codes to be able to board the station etc.
Instead of wasting time with Kaz being cursed, we could have had some tension built as they encountered a danger and prepared for a risky mission to save everyone's lives. Even the escape could have been made more exciting, with the Ace's hanging off in hyperspace to come in at the last second to help Kaz and Neeku escape.
But nope, we just get dropped into this story and told that it's important rather than being shown.

Final Words : Another massive disappointment, and new week we move onto "The Missing Agent", where Kaz, Yeager and Synara trace a distress call to a planet where a Resistance agent has gone missing. Will this finally allow the storyline to move beyond The Last Jedi since Rise of Skywalker will actually be out? Or are we going to keep treading water until the New Year?