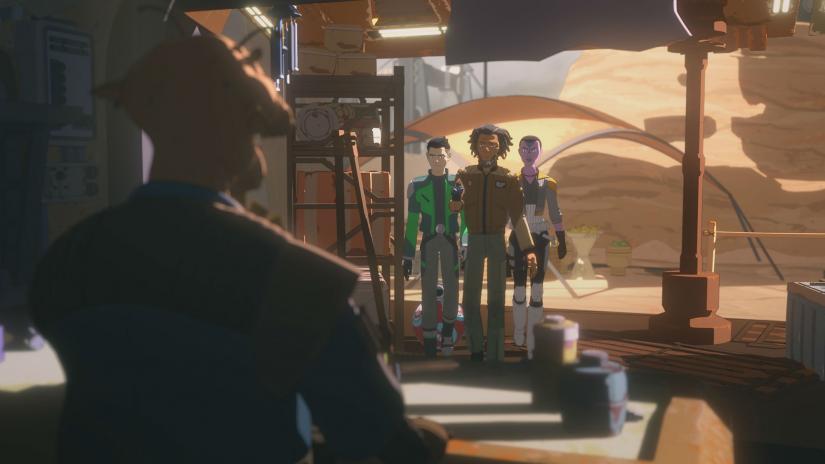 What is it ? : A resistance agent, Norath Kev, is being chased and takes shelter in a building, sending a distress call to the Resistance and hiding a datarod along with the beacon inside a console, before the door is opened, and a bounty hunter, Ax Tagrin, cuts open the door and destroys Noraths Astromech taking the agent captive.
Aboard the Colossus, Kazuda Xiono picks up the distress call and brings it to Captain Doza's attention, but he is concerned it's a trap, so wants to ignore it. Kaz points out that Resistance beacons are encrypted and nearly impossible to fake, and CB-23 and Yeager both want to respond as well, although Doza warns them that the Colossus will be vulnerable when they're away.
The Colossus emerges from Hyperspace in the Varkana System, so taking Synara with them they board a Star Commuter shuttle and travel down to the planet. They land outside the settlement, and follow the signal through the town, encountering a couple of traders on their way, one of them being a Gran, who wants to buy CB-23. But as they walk away, he pulls out a commlink, alerting someone to their presence.
They track down the beacon and attached datarod, and with the data safely stored in CB-23, they are ambushed by the bounty hunter. Synara fights him while the other two slip away with CB-23, and she shortly afterwards catches up with them. Yeager realises that someone sold them out to the bounty hunter, so they head back to the Gran trader and find him preparing to leave the planet having recently come into money. The intimidate him into revealing the location of the bounty hunters ship where he likely has the Resistance agent captive, and destroy him commlink to stop him alerting them.
Yeager, CB-23 and Kaz board the ship, finding the resistance agent, but this triggers a trap locking them inside, and the bounty hunter takes off, with Synara stealing a speeder bike and following on the ground.
CB-23 hooks into the starships systems, and manages to overload its engines causing it to crash, despite the bounty hunter activating security systems which burn out some of the droids systems,
They leave the crashed ship as Synara arrives, and the bounty hunter also emerges and begins battling Synara and Yeager, as Kaz and Norath take the speeder bike and leave, signalling the Colossus to send help, Captain Doza informs him that The First Order have arrived, and are already on their way to the surface to collect the bounty hunters prey.


High Points : A fairly solid episode with action which seems reminiscent of The Clone Wars and Rebels series, and in fact I could easily imagine Ahsoka and Anakin being aboard the ship while Obi-Wan chased after it on a speeder bike, or Sabine and Ezra with Kanan. It's classic Star Wars, and pretty enjoyable too, so I'm not going to complain too loudly about it lacking in imagination.

A also found Norath quite likable from the very beginning of the episode, he seemed to be very familiar and perhaps a mirror of Kaz, but without the buffoonery that makes Kaz so annoying to me so often.

Low Points : There's absolutely nothing massive which bothered me about this episode, and it's a perfectly competent episode of Resistance, with a solid and edge of your seat cliffhanger at the end. But I really could find it too exciting at all, and it just feels like a paint by numbers script, into which almost any set of heroes could have been put.

A minor quibble was that some of the terminology in the episode seemed wrong, as if it was being written by someone not 100% familiar with the Star Wars universe, such as the Gran trader referring to CB-23 as a Ball Droid, rather than an Astromech or BB unit, which is more common. Nothing which completely threw me out, but just seemed a little odd.

So what do you really think ? : A pretty good episode, and they've definitely got me interested in seeing the next part, although I am worried that since this episode was so formulaic that the continuation will be as well. But apart from that, it's still one of the better Resistance episodes.

Final Words : So next time we've got "Breakout", where "Kaz and Norath try to help their friends while being pursued by a deadly bounty hunter.", which sounds exactly like the second part of this story should sound, although hopefully they'll find a way of making some progress with the overall plot, and perhaps a step towards Tam rejoining the Colossus crew (as seems to have been signposted since she joined The First Order).