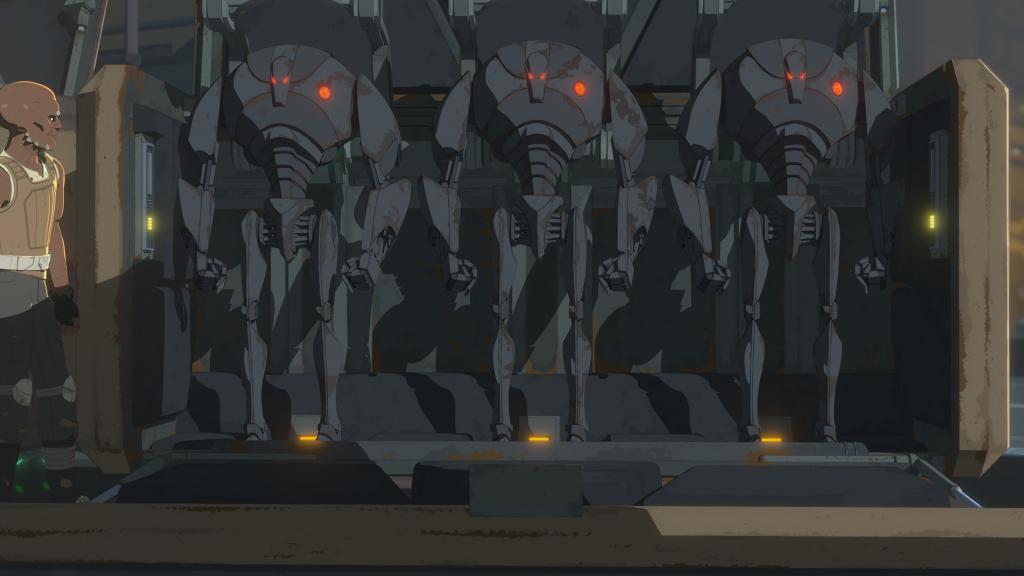 What is it ? : Kragan Gorr leaves the Colossus in his sail barge the Galleon and meets up with the Crimson Corsair, a weapons dealer. Kragan is wanting to buy weapons so he can take over the Colossus, and the weapons dealer ignores his efforts at small talk and gets down to business, delivering a number of B2 Super Battle Droids left over from the Clone Wars, which Kragan pays for.
He returns to the Colossus, and has his crew unload the cargo containers and leave them floating outside the station as Captain Doza arrives to do a customs inspection. But finding nothing he warns Kragan that the pirates are only allowed to remain due to their previous help, and he leaves, suspicious.
The Super Battle Droids prove themselves to be barely functional due to their age, so Kragan gets in touch with Neeku, and tells him the droids are to bolster the Colossuses security but need maintained, and Neeku agrees to help, excited when he discovers that a B1 Battle Droid is also contained in the containers.
Meanwhile Kaz and Synara meet in the Cantina, and realise that Neeku is working on something for Kragan, and are suspicious.
Neeku modifies the B1 Battle Droid to help him, telling it that it will be something more that just a battle droid, and updates and repairs all of the B2's.
When he finishes, Kragan has him taken prisoner and locked in one of the containers that the Battle Droids arrived in, and when when Synara and Kaz arrive to investigate, they are caught by one of the Super Battle Droids and imprisoned with Neeku.
The Pirates and Battle Droids proceed to take over the Colossus, with the normal citizens going into hiding. They seize engineering from the Chelidae, and surprise and capture the Aces, so that only Yeager, Captain Doza and the security droids left defending the control centre, but the Battle Droids are too efficient and Yeager, Doza and 4D-M1N are captured.
Inside the container, Neeku tells Kaz that he suspected that Kragan was up to something and tells him to get away from the door, when B1 blasts open the door, obeying Neeku's programming and plan.
They proceed to head to the bridge, only to discover that the prisoners have been taken back to the hangar to be spaced, so they return, and Neeku orders B1 to shut down all the Super Battledroids, which he does, as he has been upgraded to the command unit for all the droids.
The Droids capture Kragan and his men and return the Station to it's rightful owners, and Synara requests that the Pirates be released to leave the Colossus and never return, which Doza agrees to.
As they depart, Neeku is congratulated for being an excellent spy, which Kaz is disheartened at, but Neeku tells him he learned just what to do from Kaz, and that as long as long as you look naive and clumsy, no one will ever guess your true motivations, and Kaz asks him to shut up.

High Points : Well, I actually quite enjoyed this one, when I was pretty down on the whole premise before watching it. While the motivations for Kragan remain dubious, but the plot is quite watchable and progressed well.

I especially enjoyed seeing Battle Droids again, and B1 actually managed to show quite a bit of personality. I'll be quite overjoyed if the Colossus now retained B1 and the Super Battle Droids as it's security team for the rest of the series, and it makes me wonder somewhat if we might see the return of the Super Tactical droid and it's forces last seen in Rebels, as it would be a nice way of tying their storyline up if they end up becoming part of the Resistance to defeat the First Order.

Low Points : Well, Kaz is treated as an idiot, something I always dislike, and this time even gets insulted by Neeku, who in the past has usually been on Kaz's side (although in this instance, Neeku is actually trying to be complementary). But that is slightly counteracted by Kaz not actually being in this episode much, as it focuses on the Pirates and Neeku to a far higher degree.

While the episode makes a point of "The Aces" being surprised and captured, I also wondered what happened to a number of the other characters on the station, as the Colossus has supposedly gathered a bit of a collection of supposedly competent characters who also seem to be notable by their absence during this takeover. Where for example is Mika Grey? Who was made out to be a super competent Indiana Jones type figure! Or Norath the Resistance agent?
None of them show their faces, so we can either assume they were forgotten about, or caught as unawares as The Aces.

So what do you really think ? : I quite enjoyed this one, and while it wasn't anything fantastic I definitely enjoyed it more than many other episodes.

Final Words : Well, next week we've got two episodes of Resistance, The New World, where the Colossus is taken to a hidden world on the Outer Rim, and No Place Safe, where Kaz tries to join up with Poe and the Resistance, only for the First Order to locate the Colossus.

We're actually getting quite close to the end of Resistance now, and I find myself wondering what's going to happen to the Colossus. It was notable by it's absence during Rise of Skywalker, which had a scene which had dozens of ships from the various series showing up, but the Colossus which is supposedly a vessel helping the Resistance, doesn't show up when called upon by the Resistance.
Either it's a massive oversight, or the Colossus itself isn't going to make it through the series, which I think would make a fairly interesting ending, with it going down to save the Resistance during the period between The Last Jedi, and Rise of Skywalker.