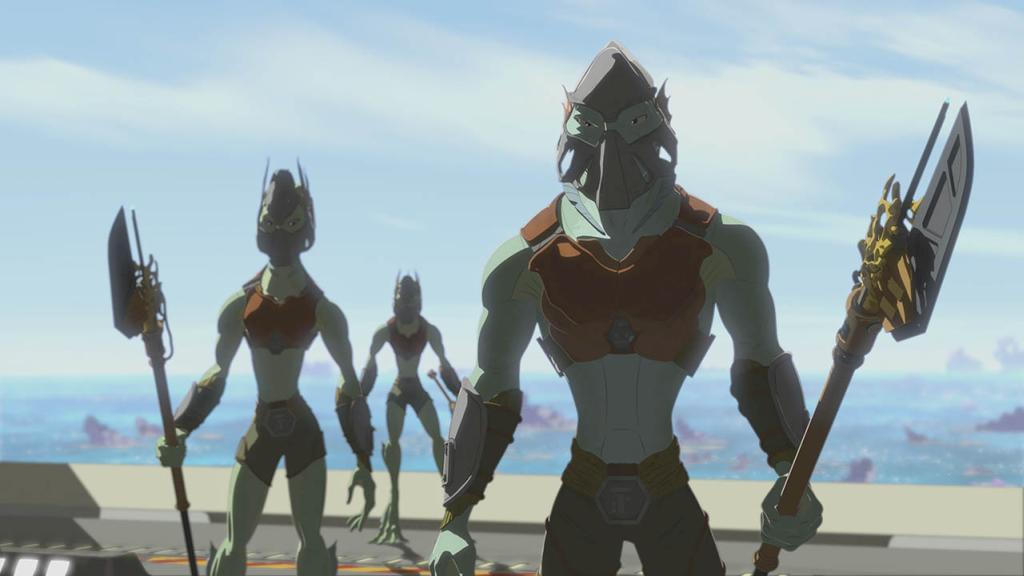 What is it ? : Kaz is repairing the Fireball, when the Colossus shakes and he rushes out to discover what is going on, encountering Neeku he asks if they are under attack, to which Neeku laughs.
Heading up to Captain Doza's office he is told that they have discovered this world, Aeos Prime, which has nothing of value, so will not be searched by the First Order, so they plan to make this their new home.
Sending the Ace's out to patrol in pairs, and Kaz is teamed up with Griff Halloran. As they fly over the planet, Kaz expresses that making Aeos Prime the new home of the Colossus, and going back to a normal life is great, but he's not sure he wants to stop fighting the First Order, asking how Griff stopped fighting for the Empire. Griff explains that it was his loyalty to his commander, Captain Doza, and that Doza had expressed the futility of fighting for a corrupt government, so they both left their service of the Empire.
They spot a fresh water spring which they can use for drinking water, and land to explore further, finding an abandoned settlement and the Helmet of a First Order Tie Pilot, but Griff disappears. Searching a nearby cave for Griff, Kaz finds a hidden Rebel base left over from the Galactic Civil War, and determines that the First Order must have come here as they checked all former Rebel sites, and may return.
However before he can warn the Colossus, he is captured by two aliens carrying Vibroswords, and is thrown in a jail cell secured by energy beams, with Griff in the next cell. The Aliens, native Aeosians spot the Colossus, and send flying sea-creature riders to board the vessel.
Kaz and Griff are escorted to see the Queen, who thinks they are members of the First Order who have come here and killed some of her people, while the two deny this, the similarity of Griff's Tie Fighter pilot helmet to the First Order Tie Fighter pilot helmets provides enough proof for the Queen to want to feed the two to local beasts called Krakavora.
Aboard the Colossus, Neeku and Yeager meet with the Aeosians, but they are hostile, and when B1 summons the B2 Super Battle Droids to defend the vessel they are easily defeated, forcing them to retreat behind the Colossus's blast doors, which the Aeosians begin prising open with their Vibro blades.
Kaz escapes from the guards, and finding the Aeosian wounded from the First Order attack treats them with his personal med pack, which causes the Queen to believe that they are more like the Rebels that once lived among them than the First Order troopers who attacked.
They travel to the Colossus, where she orders her people to cease their attack, and talks with Captain Doza who offers medical supplies and then to leave the Aeosians in peace. However the Queen recognises that the Colossus just seeks refuge from the First Order, so allows them to stay.
As the sun sets, Kaz and Yeager talk, and Kaz expresses while the Colossus may have found refuge, that the war will come eventually, but Yeager tells him that they'll face the uncertain future together.

High Points : A pretty good episode of Resistance, with a lot of world building towards the future, which feels interesting this late in the series as we begin to look at what the characters may do beyond the scope of this series.

I especially enjoyed us finally getting a bit of fleshing out of Griff Halloran's background, but I think I'd have liked to have seen some more clues to this throughout the series, with some kind of mutual respect between Griff and Doza. A similar relationship to that shown between Yeager and Doza, with perhaps some fatherly relationship shown to Torra from Griff, as she is the child of this man he respects so much. But we've never really seen even a hint of this.

The abandoned Rebel base and history with the Aeosians was really nice too, and Griff's Tie Fighter Pilot helmet proving to be evidence that they're bad guys was a really good plot point. Also the fact that the Aeosians seem to be using the left over technology from the Rebel base, using energy fields to secure their jail cells, and carrying Vibro swords made a whole load of sense. Why would they not use superior quality equipment if it's available (reminding me of the Sentinelese people who are isolated from the rest of humanity, yet use metal scavenged from wrecked ships since it is superior to what they can manufacture themselves).

I'm not sure if we've seen them all before, but there's a scene in this episode where all the Ace's are standing along with their Astromech's, and each of these droids is as customised as the Ace's racers. With Griff's built out of the head of an Imperial Probe Droid, and the black body of an Imperial Astromech, Hype's one all art deco in style, sleek like his racer, and Freya's being a T3 unit out of Knights of the Old Republic.
I really liked this, getting to see different types of Astromech, as I feel we've seen so many BB-8 style Astromechs in this series, and I'm more than a little bored with them.

Low Points : Awww, B1 and the Super Battle droids from last episode are defeated on their first use, and I'm really disappointed, although perhaps they'll be repaired for a future story.

The speed with which Griff disappears is questionable, as Kaz is only a few steps away and only bends down to pick up the helmet he's found, and Griff is standing in a wide open area. But somehow both he and his Astromech disappear without a sound.

So what do you really think ? : A solid episode of Resistance, which seems to be making progress towards the end of the series with the Colossus now having a home to fight for, rather than endlessly running away.

My endless problem with this series has been the amount that it treats it's protagonist as a blundering fool, but when, like in this episode, he is treated as a hero, the series manages to be far more entertaining and interesting.

Final Words : So, this episode broadcast along with the next episode "No Place Safe", where apparently Kaz has to decide whether to remain at the Colossus or join the Resistance to battle the First Order. Which given the name of the series, shouldn't be a very difficult choice.