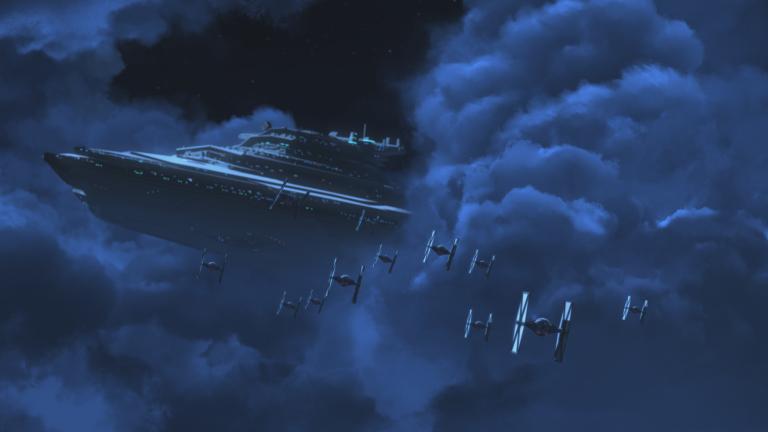 What is it ? : Yeager and Kazuda are working in Yeagers hangar on the Colossus when a squadron of X-Wings come in to land, led by Venisa Doza, the wife of Captain Doza and the mother of Torra.
She tells them that her squadron needs a temporary base and would appreciate help in rescuing Resistance recruits who are evacuating from Dantooine which is under attack by the First Order. Doza immediately lends the help of the Colossus and it's Aces. Accompanying Venisa are Resistance agent, Norath, and a human pilot named Hugh Sion who accompanied Kazuda on his final mission for the New Republic when he joined the Resistance after speaking to Poe Dameron, and the two joke about their battle with Baron Elrik Vonreg.
Venisa briefs the pilots, and they scramble making the jump to Dantooine and engaging the Tie Fighters patrolling there, easily defeating them.
Meanwhile on Commander Pyres Star Destroyer, Tam Ryvora and Jace Rucklin are briefed on the situation on Dantooine about destroying the shuttles carrying the recruits, although Tam expresses doubt about destroying unarmed shuttles.
As the Recruits shuttles launch, the Resistance X-Wings and Ace's escort them, only to witness Pyres Star Destroyer arriving and launching Tie Fighters. In the battle, the squadron leader of Tam and Jace's squadron is killed, and Tam becomes interim squadron leader, although her Tie Fighter is heavily damaged and she cannot take part in the battle. However Jace manages to destroy one of the shuttles, as they others make the jump to Hyperspace and escape along with their escorts.
Tam is promoted to Squadron Leader due to the destruction of the shuttle, much to Jace's chagrin, as he feels he deserves the promotion.
Back on the Colossus, Captain Doza tells Venisa that the Resistance is welcome to stay aboard the vessel, as he is tired of sitting on the sidelines and is joining the war. Venisa questions whether those aboard the Colossus will support him, but he points out it's his ship so he gets final say.

High Points : Another excellent episode of Resistance, with lots of Starfighter combat, and it's great to see the actual Resistance fighting the First Order instead of just the crew of the Colossus.

And for Resistance, a series I've never really been a fan of the artistic style of, it looks pretty darn good. Venisa Doza in particular flies a variant (or at least heavily modified) X-Wing, which looks interesting.

While the battle at Dantooine is fairly large, with a couple of dozen starfighters, it's kept simple enough to keep track of, and follows the combatants keeping you in the action, rather than just showing us a bunch of dots flying around the screen, as so often battles with a number of opponents can begin to look like.

Low Points : Again we get the half hearted redemption of Tam. While in this battle she doesn't shoot at her friends, and doesn't take down any of the shuttles, this could just be down to the fact her Tie is crippled and she can't really take part in the battle.
So instead of her taking a stand and refusing to hurt innocents, or fight with her former friends, the decision is taken from her, forcing her into a passive role.
And Resistance keeps on doing this to Tam, so instead of her doing something to redeem all the times earlier in this season when she actively tried to kill her friends and everyone aboard the Colossus, instead we get her failing to act due to circumstances.
And while circumstances may take a large role in making people into heroes in reality, I expect our fantasy heroes to act like heroes, rather than just gain karma for not killing people that they're not in a position to kill anyway.

Final Words : So, we've got one episode to go of Resistance, "The Escape", which seems to mesh well with last Seasons final story "No Escape". Given that we saw Kylo Ren in the trailer released before the season started, and we haven't seen him so far, I guess he makes his appearance new episode (or the trailer was just lying to us).
I can't really say that the series has had any build up to its climax, so I'm intrigued if they manage to pull something out to end it in a blaze of glory, or if it just ends without anything of note happening.