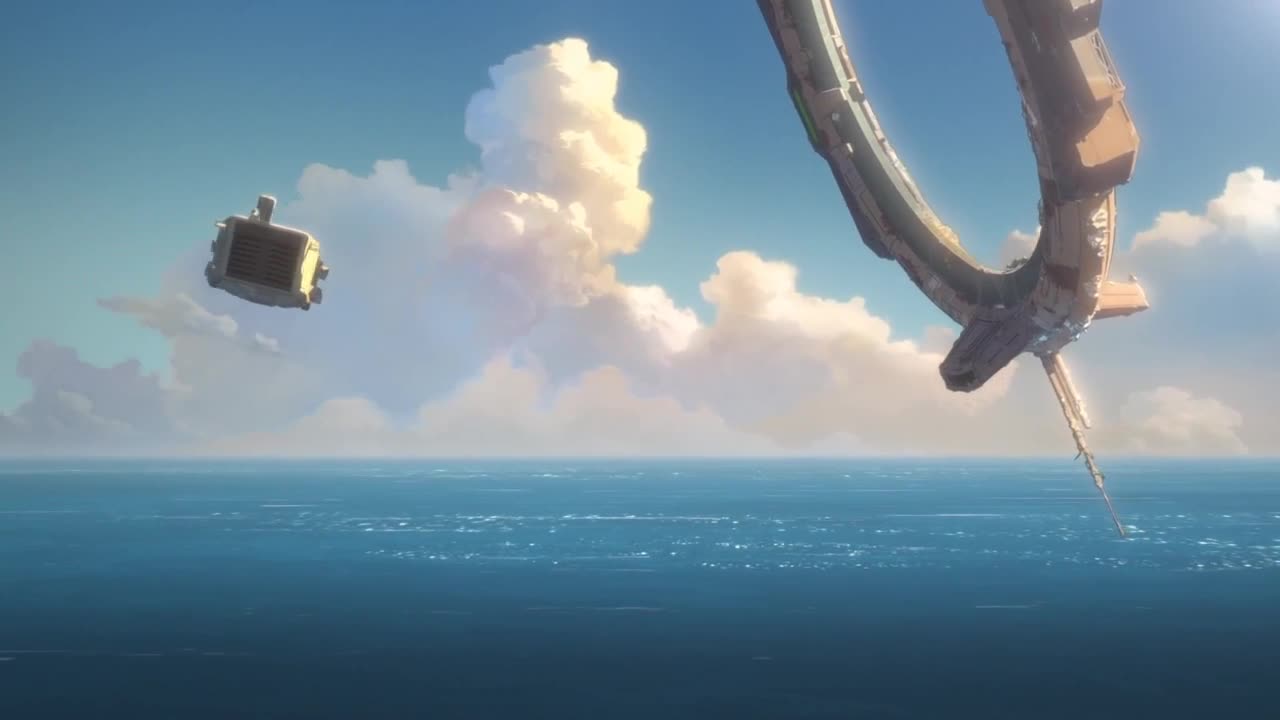 What is it ? : Tam and Jace are aboard Pyres Star Destroyer, they've heard rumours of upcoming action against the Resistance, when the vessel emerges from Hyperspace. They rush to a window and see that the ship has emerged above Aeos Prime, along with a large number of other Star Destroyers which all begin raining fire down onto the surface of the world, punishing it for harbouring the Resistance.
Tam decides she's had enough, and breaking into Agent Tierney's office with the help of a reprogrammed mouse droid and steals her Comlink back.
Using it, and a code she and Neeku had developed to talk behind Kaz's back, she arranges to defect, and to meet with them back on Castilon.
Yeager and Kaz take the First Order transport to Castilon and wait for her, with the Colossus awaiting their return. As they arrive back on Castilon, the find a damage racing ring, which Kaz identifies as the one he collided with in his first race. They hover next to the ring, and climb onto it, enjoying being back on the water world.
Meanwhile Tam in her role as Squadron leader arranges a training mission to Castilon, which makes Agent Tierney suspicious, who then discovers the missing Comlink and realises that Tam is going to defect.
Entering the atmosphere of Castilon, Jace, acting as Tam's gunner, spots Yeager and Kaz on the racing ring, and orders an attack, but Tam knocks him unconscious, and Tam proceeds to destroy the other two Tie Fighters.
Meeting up with Kaz and Yeager, they board the First Order transport taking an unconscious Jace with them, as Pyres Star Destroyer emerges in orbit and launches Tie Fighters, and as they race to make the jump to Hyperspace, they are caught by the Star Destroyers tractor beams, and pulled aboard. They wipe their navicomputer so the First Order can't find the location of the Colossus, but Jace awakens in the hold and access the data before it is wiped.
Tam distracts Agent Tierney and Commander Pyre as they arrive with Stormtroopers so Yeager, CB-23 and Kaz can sneak out of service hatches on the transport and sneak away.
Back on the Colossus, Captain Doza thinks they have waited for Yeager and Kaz for too long and wants to take the Colossus to rescue them, but calls for a meeting to inform everyone he is taking them into danger, and the inhabitants are not in favour of going into battle, saying that he is unnecessarily putting them in danger.
Discovering that Jace has passed the Colossus's location onto Tierney and Pyre, Tam is rescued by Kaz and Yeager and they try to sabotage the Destroyers Hyperdrive and get a message out to the Colossus which Neeku receives interrupting the meeting to inform Doza that the First Order will arrive soon.
A battle erupts, with the Colossus being overwhelmed by the Star Destroyer, and the Ace's unable to damage the Destroyer due to its shields, but CB-23 manages to deactivate them, allowing the Ace's to target the Destroyers engines.
During the distraction, Tam, Kaz and Yeager manage to escape, and as the last engine is taken out by the Ace's the Destroyer explodes from within, killing all aboard.
Tam is welcomed home telling Kaz that he's always been a hero, and Neeku is glad everyone is back together and that things can go back to normal with everyone able to laugh at Kaz's expense once more.

High Points : It's action packed, and the two episodes merge together into a finale extremely well (the break between the episode is when their transport is caught by the Star Destroyer).

And even if I don't really like it, I think that they've managed a good job of keeping Kaz's character consistent. There are numerous times during this episode when he's handling a gun, and fighting the First Order where he demonstrates how bad with a pistol he is, which is something they've kept throughout the series. And although there are times in the past where that really annoyed me (the hero being incompetent), it actually made me like Kaz a little more in this episode. He's not great in a gunfight, but that didn't stop him trying, and that's quite a heroic feature to his character.

Low Points : I'm still not happy with Tam's "redemption" as portrayed in the series. She turns on the First Order here when they orbitally bombard a primitive species, which is the right thing to do. But even when she seems to have learnt that killing is a bad thing to do, she doesn't come up with a way of escaping which won't kill her squadron and colleagues she's been working alongside these past months. She shoots them from the sky, killing them all.
I thought perhaps she might have come up with a training exercise to distract them. "Okay Pilots, target practice training. Hunt down all of the Racing Rings and shoot them down, one who gets the most receives a commendation." Then while they're distracted hunting for the rings, she meets with Kaz and Yeager and escapes.
But nope, she murders them all. Heck she even leaves Jace Rucklin, a character who has been in the series since season 1, lying on the floor when the Star Destroyer explodes.

And on that point, I have to mention the dubious morality of the Sequel era. In the Original Trilogy, Stormtroopers were people who'd joined the Empire, and taken money to be the murderous thugs of the Emperor. In the Prequels, the bad guys were Droids, who didn't even really have personalities. In the Sequels, the Stormtroopers are children, who have been kidnapped from their parents, and grown up as slaves while being indoctrinated by the First Order.
What I'm saying is that First Order Stormtroopers are victims, and while sometimes their deaths might be required, all too often we see thousands of them dying in explosions while the heroes cheer.

So what do you really think ? : What we've also got to remember about this episode, is that it's the finale, not only of this season, but of the entire series, and we don't really get a satisfactory conclusion at all. Fine the single Star Destroyer which has been searching for the Colossus has been destroyed, but the First Order is still out there hunting for them.
No great victory is really achieved! Rebels saw the liberation of Lothal, and the defeat of Grand Admiral Thrawn. But Resistance sees, the Colossus escaping from it's pursuers once more, and the death of a mere Commander.

It also missed bringing back characters who feel like they should have returned. The entire series was started off by Poe Dameron recruiting Kaz, and I think with the Colossus now willing to support the Resistance, the series could have ended on more of a hopeful feel if he'd returned to bring them all into the Resistance at it's time of need (after The Last Jedi). Seeing Poe and BB-8, who featured so heavily in season one, really seems problematic (I don't know the reason for this, was the actor too busy to record some lines? Didn't he want to be connected with Resistance any more? Is he just sick of Star Wars?).
But also smaller characters like Yeagers brother, Marcus Speedstar, who it felt was going to be important later, but never showed his face again. Or even Venisa Doza and Mika Grey who both seemed to be built up as important characters, but in the finale barely show their faces as background characters (Hell even Opeepit managed to get a bigger role in the story than them, setting his floor buffer onto some Stormtroopers as they invade the station).

And perhaps saddest of all, B1 and the Super Battle Droids were apparently destroyed a couple of episodes ago, as they make no appearance in defending the station. I really thought they made an interesting addition to the series, but they were taken out in their first appearance after they were introduced. Even though they showed more personality in that single appearance than 4D-M1N did in all his appearances in both seasons.

Final Words : So that was it.
Resistance, over already, and gone with a Whimper not a Bang.

It's finale sums up the series perfectly, so perhaps is the most perfect ending that Resistance could possibly have. A collection of missed opportunities, weak storytelling, and poor characterisation.