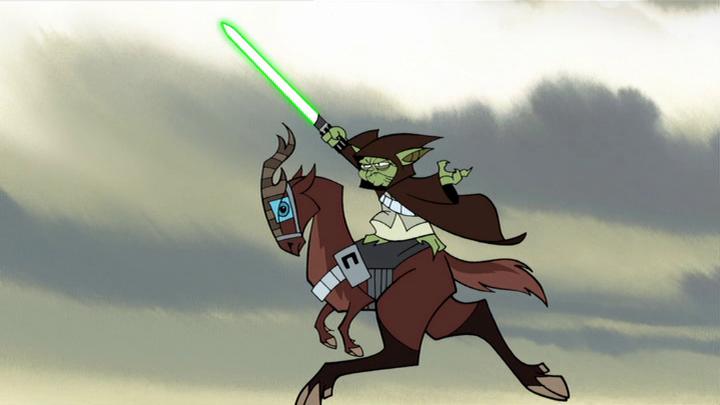 What is it ? : The Episode begins with Yoda riding a Kybuck at the head of a Republic Army into battle against the Seperatists. Showing clips from various battles as the Jedi and Clone Troopers fight against Battle Droids, as a voice over plays.

"Like fire across the galaxy, the Clone Wars spread. In league with the wicked Count Dooku more and more planets slip. Against this threat, upon the Jedi Knights falls the duty to lead the newly formed army of the Republic. And as the heat of war grows, so too grows the prowess of one most gifted student of the Force."

Clips are shown of the Quarren joining Count Dooku, of Kit Fisto with his lightsaber underwater, Mace Windu leaping into an army of Droids, of Arc Troopers opening fire with heavy weapons, of Anakin and Obi-Wan dropping from a LAAT/I at great height into a Seperatist Army, and fighting with the Force and Lightsabers, as Anakins face is covered with shadows.

The Scene then cuts to the Jedi explaining to Chancellor Palpatine about Separatist factories on Muunilinst, and they decide to send Obi-Wan and his army against them, but Palpatine requests the Anakin be given command of the Space Forces, praising the young Jedi's skill, and although Obi-Wan objects saying that Anakin is too young, Palpatine twists Yoda's words and forces Anakin into the position.
We then see Obi-Wans forces boarding fighters and their Acclamator Transports leaving for battle, and Anakin climbs aboard his custom fighter using the force to send his cloak wrapping around C-3PO as R2-D2 finishes working on the fighter, and momentarily hovers outside Amidala's apartment to waves goodbye to her as they all head off into space.

High Points : Well it's a clip show really, with mostly clips of future episodes (if I remember right from my last viewing of the series some 10+ years ago), and the animation style is heavily stylised so may not be to everyones taste, but personally I find it has it's own personality, and one I don't hate.

Low Points : There's nothing here to get your teeth into, and apart from the clips, there's probably less than 30 seconds of actual storyline here.
But even from what we get, the characterisation is a little too obvious. Palpatine is obviously manipulative, Obi-Wan and Yoda look like they're sulking when he orders Anakin's command of the Space Forces, and Anakin is obviously secretly evil, with his face becoming shadowed. It's just too on the nose for me without any subtlety.

So what do you really think ? : Okay, I'm aware it's not much more than a glorified toy advert, designed to put new toys on the shelves and get kids to buy them.
And the fact that the episode is just 3.41 long, with titles and credits included in the run time. But the fact that the first episode is a clips show, with no real storyline in it at all disappoints.
That said, I seem to remember some of these being pretty good, so we'll see how it goes.

Final Words : It's kind of weird to be watching a Star Wars Animated series so new, but already to be counted as Legends.
But as I've said, I seem to remember some of these being pretty good, so we'll see if my memory holds up, and hopefully when we get to the longer episodes of the third season we'll get some decent storyline too.