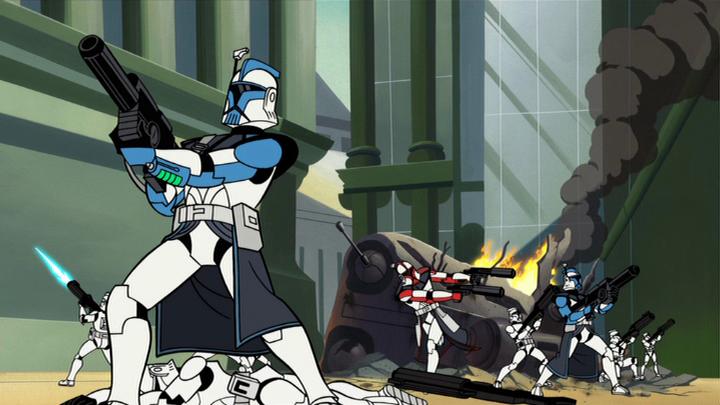 What is it ? : So the Clones have crashed into the city streets while the invasion of Muunilinst is underway, and the unseen person targeting them is now shown to be a group of sniper battle droids hiding on balconies above the Clones. As some of the Clones are taken out by the blasts coming down from the snipers, and the commander uses a scope to see through obstacles and locate the snipers, ordering a missle attack which destroys the droids and indeed the barriers they're hiding behind.
Heading onwards through the city and using handheld probe droids to scout ahead, the Clones encounter a AAT battle tank which attacks, but they rapid dispatch it by mounting the vehicle and dropping an explosive through the hatch, which then explodes destroying the vehicle.
Reaching their target, they see a massive turbolaser which is firing up into space at their fleet. The Clones rappel up to the turbolaser, destroying the battle droids guarding it.
The clones scramble along the barrel of the massive weapon, looking little more than ants against the scale of it, planting explosives along it's length. They then head up to the top of the building overlooking the weapon as their explosives detonate destroying it.

High Points : It's an all action episode as the Clone Trooper squad fights its way across the city, and apart from a couple of words spoken to Obi-Wan Kenobi when they reach their target, and his confirmation, it's told entirely through the action. The Clone Commander signals his troops through hand signals, which makes the troops seem so much more competent, as he just points towards their tasks, and they silently act.

And I know that this series was just to act as a glorified toy commercial, so there's a reason for this, but we're also seeing a bunch of different battle droids and Clone Troopers for the first time. From the Arc Troopers, through to the anti air, and sniper Battle Droids.
I also liked the small handheld probe droids the clones use to scout ahead, combining the seeker drones seen in A New Hope with other probe droids, and they make a lot of sense for the Clones to use technology like this on the battlefield.

Low Points : Apart from, as always the very short running time, this is a pretty good episode, it gets going without any retelling of story, and just flows through the Clone Troopers actions.
If I am to make any criticism it's how easily they deal with the AAT battle tank as they move through the city, as it doesn't seem to pose any risk to the Clones, being on screen from first being seen to destruction for only 15 seconds. I'd definitely have preferred it to have challenged them more, the ease with which it's dispatched made me wonder why they even included it.

So what do you really think ? : These episodes aren't going to really receive high scores due to their brevity, as there's no time for anything much to happen without some pretty amazing storytelling. But this was a solid couple of minutes of action, and the lack of dialogue really worked for it.

Final Words : Now we're into the action, the series is really nipping along, getting the story told and showing us a bunch of action, the brevity of the episodes just makes me want to binge watch them all though.