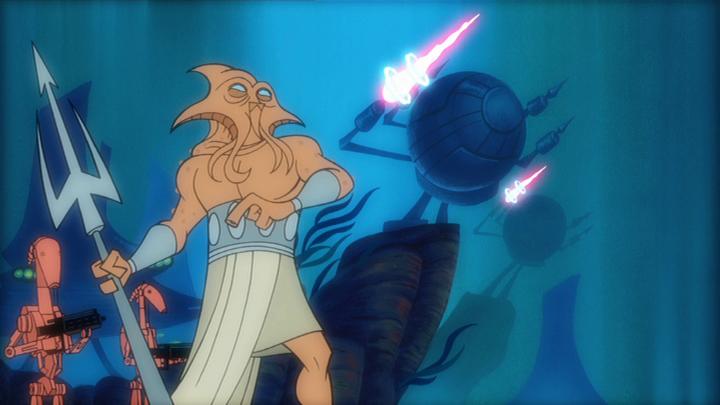 What is it ? : We begin with a voice over from Yoda explaining that the people of the world are split between it's two species, and the Quarren Isolation League have allied with the Confederacy of Independent Systems and obtained a Droid Army. But the Mon Calamari council, and that alone the Calamari people are no match, so the Republic must intervene
We see Acclamator Troop Transports landing on the surface of the oceans of the planet, and Yoda tells Kit Fisto that he trusts his judgement on the situation, and we see LAAT/i's flying over the surface of the ocean, and Kit Fisto leading Aquatic Clone Troopers against the droids and their sub-fighters.
His Jedi powers cause their missiles to misfire and destroy many of them, and he cuts through them with his lightsaber.
But the Quarren use a massive laser cannon on crab-like legs to fire upwards destroying the vulnerable transports, but Kit Fisto summons up balls of force energy which rip into and disable the massive weapon, allowing eel riding Mon Calamari to push it into a chasm where it is destroyed. Kit Fisto dodges out of the way of the explosion emanating from the chasm, and flashes a grin at the camera.

High Points : It's great seeing Clone Troopers and the Droid Army operating in different environments, and although we're seeing Aquatic Clone Troopers for the first time, the droid army comes out of it best with loads of vehicles such as the Crab Cannon, Aquatic Droid Fighters and Battle Droid Mini Subs. It's an absolute joy for someone like me who likes seeing new vehicles and weapons.

And although the change to Mon Calamari seems a little abrupt as we in no way were finished with the action on Muunilinst, it moves quickly and gets us straight into the action without any confusion.

I also loved seeing the Acclamators landing on the Oceans and floating, reminded me of flying boats which kind of fits the retro futurism of the Star Wars Prequel era.

Low Points : I generally remember Jedi in this series being pretty darn overpowered, and this is kind of the first time we see it, and I don't like it. Kit Fisto shows off powers here from hurling waves of missiles back at the enemy, cutting up droid sub fighters with impunity, and finally summoning up giant balls of energy (maybe just air?) which smash a giant weapon. If the Jedi are truly this powerful, then the Clone Wars should be easy.

And while the styling of Muunilinst to take on the Greek architecture and colouration of money to match with it's banking heritage really worked, the styling carries on through with the Quarren wearing greek style robes and carrying tridents like Poseidon. And it looks quite out of place on an alien species in a space war.

So what do you really think ? : Although it's overblown and a bit silly, I quite enjoyed it's fun action, and loved seeing all the new vehicles and droids.

Final Words : I can't remember how much the series jumps about, and if next episode we're going to return to Muunilinst, say on Mon Calamari, or go somewhere new, but I'd kind of like it to focus on getting one storyline moving towards a conclusion before we move onto the next.