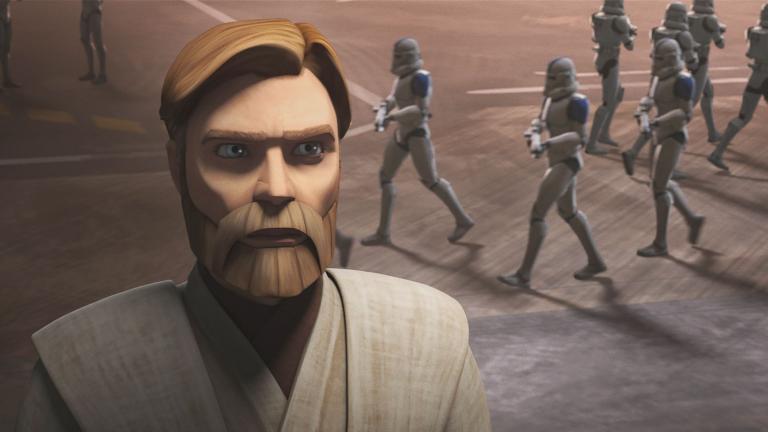 What is it ? : Once again we've got the finished version of one of the unfinished episodes, this time Star Wars: The Clone Wars: Unfinished Episode 6: A Distant Echo.
There's a couple of changes this time, one is minor (the reason behind the fight between Rex and Crosshair now being that Crosshair shows a lack of empathy for Echo, rather than accusing him of turning traitor in the unfinished episode), and one major. The scene where Anakin is offended at the Bad Batch having a lewd illustration of Amidala on the nose of their ship having been removed in favour of a much longer scene where Anakin contacts Amidala and discusses Rex's building obsession with rescuing Echo.
This takes place in the clone barracks, while Rex keeps watch outside and intercepts Obi-Wan who is looking for Anakin, keeping him delayed while Anakin completes his conversation and helps cover up what was going on. However, Obi-Wan asks how Amidala is, showing that he knows what Anakin was doing, and potentially knows about their relationship.

High Points : As with the last episode, the animation is an improvement on the series as it was last aired, and looks great, and the story is still great.
The added scene with Amidala was brilliant, and shows we're getting close to Revenge of the Sith in the timeline, because even though Anakin doesn't notice it (or at least doesn't comment on it) Amidala is getting a bit chunky and looks to me to be obviously pregnant.

When I watched the original episode, I remember commenting that the modifications to Echo seemed a bit of a cop out, however I really felt for him this time. He looks like absolute hell with cybernetic modifications deeply inserted into his body, and his skin a pale and sickly colour. A massive improvement which make him look like he's had a bad time of it, where originally he kind of looked fine.

Low Points : While I loved the new scene between Anakin and Amidala, I do have to question Obi-Wan's statement at the end, where he seems to reveal that he's completely aware of the Anakin / Amidala relationship. It doesn't feel quite right, especially as we've not seen him discovering it and his comment comes completely out of the blue. And while there are arguments for him being aware of their relationship in Revenge of the Sith (Obi Wan goes straight to her when Anakin falls to the Dark Side), I don't feel convinced that this matches up perfectly.
That said, it's entirely possible they're going to show more, and have him help cover it up before the end of the series, which would help explain why it's not spoken of during the movie.

Also, I complemented the improved CGI, however I must also comment on the overuse of the models for the base on Anaxes. It looks absolutely great, however we keep getting scenes where the camera sweeps in along the valley towards the Republic base and the cave it is built within. We saw it back when the Clone Wars Saved trailer was released, and in both episodes so far, and it makes me think they're being a little cheap, as they spent so much time, money and effort making such a lovely model, that they just keep on using it to justify the expense.

So what do you really think ? : I enjoyed rewatching this one more that I did the previous episode, as the larger number of changes, and most of them for the best helped make it a much more enjoyable episode for me.

Final Words : The next episode, On the Wings of Keeradaks was a dip in the quality of the story for me when I was watching the Unfinished episodes. I hope like on this episode they make some improvements and fix the very minor flaws I had problems with.