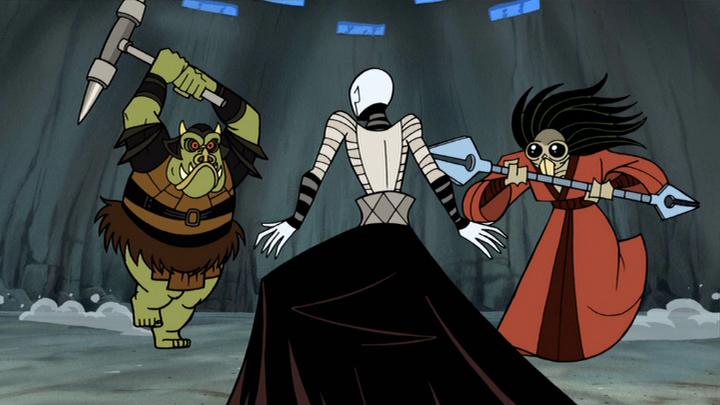 What is it ? : We begin the episode with various alien gladiators fighting in an arena, before we flash into space where Count Dooku's solar sailer arrives in orbit and proceeds to land. Dooku is met by a guide who takes him into his seat in a place of honour looking down into the arena.
His guide is silently replaced by a hooded figure who Dooku compliments on her skill, but tells her that he's not looking for a spy. The figure leaps down into the arena and joins the combat, taking out the opponents and turning their attacks on each other until she is forced to ignite her lightsabers and defeat the last opponents.
Dooku stands and applauds her, and inquires where she learned such skills, and she replies that they came easily to her because she is Sith.

High Points : It's the introduction of Asajj Ventress, and what an introduction it is, she manages to impress Dooku and defeat numerous opponents. It's fast, action packed and manages to tell the story it wants to tell, that of Dooku and Ventress meeting.
Although I believe the next episode carries on with this part of the tale, it could quite as easily just end here and next show Ventress working against the Jedi and we'd know she was now working for Dooku.

Low Points : My only criticism is that I'd like to have seen more of the individual gladiators, perhaps a case of where less, but more skilled opponents would have been better. But it's a minor quibble, and I do think this short episode is an almost perfect use of this format.

So what do you really think ? : Although it's a very minor thing, I do adore the fact that background story of the droid gladiator, L8-L9 ties into the old Marvel comics series, with it being built by TaggeCo and sent to the arena for testing by Baron Orman Tagge. Nice to see these very different strands of the Star Wars EU tying together.

Final Words : Well, more Dooku and Ventress next episode which will take us back towards the main storyline and the invasion of Muunilinst.