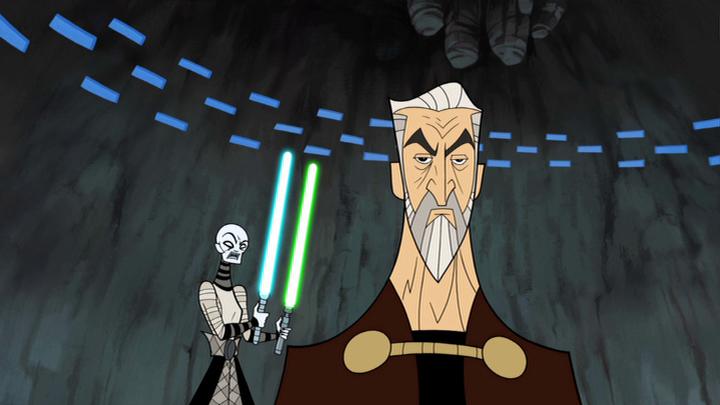 What is it ? : We pick up exactly where the last episode left off, with Asajj Ventress telling Dooku that she is a Sith. He laughs at her, levitating from his grandstand position down into the arena, telling her that while she dresses like a Sith, acts like a Sith, and fights like a Sith, she is no Sith.
This aggravates her and she attacks, and he turns and unleashes force lightning until she falls unconscious.
When she awakens she finds herself in a comfortable bedroom, her lightsabers stored on a silver tray nearby. As she takes them and explores, Dooku attacks with his lightsaber and they fight, until Dooku beats her and destroys her lightsabers.
At this point a hologram projector enters the room, with Darth Sidious having watched their fight, who after being introduced by Dooku, applauds her efforts. Sidious tells her to go and kill Anakin Skywalker, and Dooku gives her a new set of Lightsabers identical to his own.
As she leaves in her new starfighter, Dooku says he is confident in her success, but Sidious says that her success or failure is unimportant, the point is to test Skywalker and lead to the doom of the Jedi.

High Points : While I said that the last episode pretty much achieved everything it needed to about the introduction of Asajj Ventress, this one does add to that in an interesting way. Showing how Dooku forces her to display her talents to his master, destroying the vestiges of her old life and replacing them with those of the role that the two Sith want of her.
And it's a cool fight, with both using force powers throughout, throwing items at each other, doing force powered leaps and jumps.

I've also got to comment on Dooku's levitation down from the grandstands into the arena. As he slowly floats down, speaking to her, his boots tight together which reminded me of anime, and perhaps of M. Bison from Street Fighter anime in particular. It looks fantastic, and makes him all the more impressive, as he seems to be so calm and powerful, without particularly doing anything.

Low Points : There's nothing in particular that I can criticise in this episode, it does feel a little extraneous, as the fighting that is going on is fairly pointless. While it could be said to be displaying Ventresses talents to Sidious, it could just be taken for granted that he would trust Dooku's decision to choose an assassin.
Or it could be said to be proving to Ventress that Dooku is powerful and has much to teach her, and is therefore worthy of being her master. However she has sought him out, so it could have just been taken as granted.
So while it's exciting and action packed, it does just feel a little pointless.
But that could just be me, since I felt the last episode didn't really need anything more to tell it's story.

So what do you really think ? : I enjoyed this one despite my problems with it, and it's really well done.
I actually feel that this portrayal of Dooku is better than that done in the later Clone Wars series, as he just feels more powerful and sinister, when the later series just makes him look somewhat cowardly and weak (as he ends up running away from many failed encounters).

Final Words : So we're back in the next episode to the battles on Muunilinst. So although it's possible for this episode to have been running alongside the storyline going on there, as Asajj has just been dispatched to battle Anakin. However I get a feeling that this was actually supposed to happen some days or weeks beforehand to give her time to arrive at the battle.
Which annoys me slightly, as either distances in Star Wars don't take any time to cover, which doesn't seem right, or the timeline in these episodes is jumping around without letting us know. Either way, it annoys me slightly.