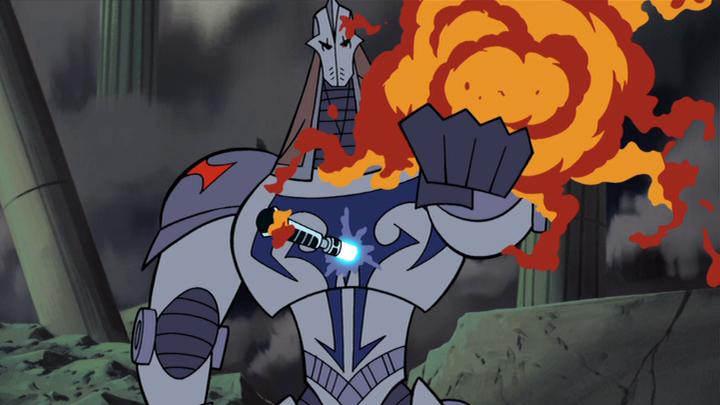 What is it ? : So we're back to Muunilinst, we see Clone Troopers with lances aboard speeder bikes, facing off against IG Lancer droids on their speeder bikes with lances. And as the two armies speed past each other and bodies of both sides go flying into the air.
As Durge joins the battle, he spots Obi-Wan Kenobi among the Republic forces by his brown Jedi cloak he is wearing over Clone Trooper armour and the two clash aboard their speeder bikes. Firstly Durge knocks Kenobi's helmet off and makes him lose his lance, but Kenobi ignites his lightsaber and they speed at each other again.
Kenobi cuts his way through Durges lance, and destroys his speeder bike, turning back for another attack. But Durge grabs the front of Kenobi's speeder bike, causing Obi-Wan to force leap clear, and Durge uses the speeder bike as a club to attack Obi-Wan, who cuts his own Speeder Bike into pieces before stabbing his lightsaber through Durges body, but it gets stuck there as he is thrown away by a massive punch.
Durge fires a swarm of projectiles from a wrist launcher, which Obi-Wan deflects using the force, before Durge swaps to his other arm and vents a blast of fire from a flame projector. Kenobi likewise deflects this with a gesture, before using the force to crush the flame projector on Durges wrist.
Durge pulls a flail and swings it at Kenobi, who pulls his lightsaber back to him using the force and cuts the chain of the weapon, and likewise slices in half the twin blasters that Durge pulls on him.
Obi-Wan closes the distance and Durge uses two energy shield projectors on his wrists to deflect the saber, but Kenobi pushes his advantage slicing Durges arm off, before cutting him in two.
Obi-Wan leaps onto a discarded Speeder Bike to rejoin the battle, but we see the severed arm begin to reconnect to his body and heal.


High Points : I really enjoyed the fight between Durge and Obi-Wan, as Durge pulls weapon after weapon on the Jedi, only to be defeated again and again. His attacks with the projectile launcher, flame projector, flail and blasters all fail, and he is reduced to just deflecting the attacks with two small energy shields.
But the stand out moment, which made me laugh out loud, was definitely when Durge grabs Obi-Wan's Speeder Bike and attempts to beat him to death with it.
Also Durges immense resilience is impressive, as he continues to fight even with Obi-Wan's lightsaber completely spearing through him, and it's a pretty cool sight to see the lightsaber still ignited stabbed through his chest and just stuck there.

Low Points : But while I'm impressed by the sight of the lightsaber stabbed through Durge, there was definitely a voice in the back of my head asking if it should really work that way. Should the lightsaber stay ignited once it leaves Obi-Wan's hand? Because generally we see them switch off once the Jedi loses them. Should it just stick there? Because we've seen them cut through almost anything, so even if it remained ignited, shouldn't gravity pull the saber down, slowly cutting Durge in half?
It looked cool, but I'm not convinced it should work that way.

Also Durges healing ability, because we've seen Lightsabers basically cauterise wounds when they cut through someone, because we see no blood. So shouldn't that seal off the stump of Durges arm and stop his healing? Who's to say, but it just feels slightly wrong once again.

So what do you really think ? : Again I really enjoyed this episode, the 3 minute run time really works for short fights and skirmishes, and the Obi-Wan vs Durge fight is pretty cool.

Final Words : So we get the sequel to the Durge vs Obi-Wan fight next episode, but after having the Asajj Ventress vs Count Dooku fight become two sequential fights, this feels like we keep getting stuck in a timeloop instead of making progress, especially as we only have 2 more episodes of this season to go, and I really want the battle of Muunilinst to be resolved so we get some kind of conclusion to make the season feel like a complete story rather than just a series of vignettes.