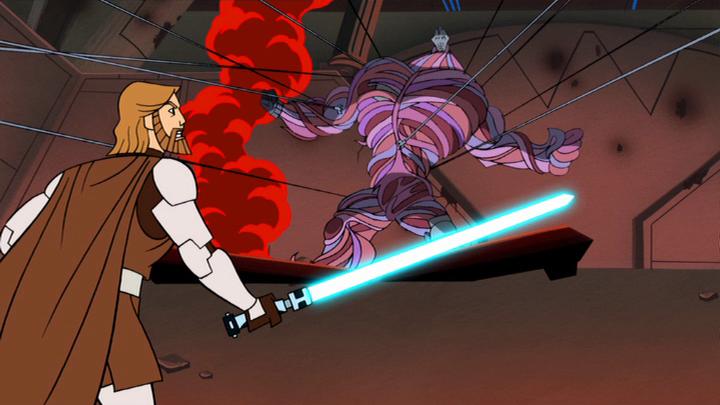 What is it ? : As seems to be standard for this series, after we get a fight, we immediately get the sequel to that fight.
We begin with Obi-Wan speeding through the city, and up the side of one of the buildings before somersaulting free of it and force leaping onto the roof of the building where he rendezvouses with the Arc Trooper from the beginning of the season. They seize the banking guild headquarters and capture San Hill who had been watching the battle on a holographic display, and who begins begging for his life.
Obi-Wan detects something coming, and Durge bursts into the room and is caught in the crossfire as dozens of blaster shots impact his armour, before he is hit by a missile from a missile launcher and the Clone Troopers think he is dead as the smoke obscures where he was standing.
Durge re-emerges, his armour broken away revealing the mass of tentacles that make up the bulk of his body and he attacks Obi-Wan causing him to leap off the table where he was standing, which Durge then breaks in half.
Clone Troopers fire grapples into Durge, hoping to hold him in place as they all blast him, but he is unaffected.
Obi-Wan is caught by Durge and absorbed into his body, when the Arc Trooper commander grapples Durge and pumps electricity into him, but again Durge shrugs it off advancing on the Clone.
But suddenly Durges body begins expanding, and he bursts all over the room, as Obi-Wan force pushes him away splattering him everywhere.
Obi-Wan comments on the mess he's made, and gets back to San Hill who he reminds was in the middle of surrendering.
Un-noticed, some of Durges remains slither away.

High Points : Even though they are fairly ineffective, it's nice to see the Clone Troopers coordinated in their attacks on a target. Although sadly I think the next time we see that is during Order 66 when they take out the Jedi.
It's also nice to see a variety of weapons being used, as they not only fire their blasters, but also Missiles, grapple hooks and tasers to try to take down the Gendai bounty hunter.

Low Points : While it actually mimics the RPG pretty well, with Durge totally shrugging off blaster bolts, the fact that he is shot perhaps hundreds of times just makes him ridiculously powerful. In other media we've seen the Clone Trooper blasters take down starships, but Durge is totally unaffected.
I think I'd have preferred it if he'd regenerated quickly, so bits of him got blown off, and then almost instantly grew back., but perhaps that's too gory for a kids cartoon.

So what do you really think ? : Unlike the Asajj Ventress vs Dooku sequel fight, which was fairly pointless but at least exciting. This fight is really disappointing after the excellent first part last episode where he used different weapons and tactics against Obi-Wan, even trying to smash him with his own Speeder Bike.
But this time Durge is just a monster, smashing everything like the Hulk and shrugging off all attacks rather than trying to avoid them.
There's only so many times you can watch hundreds of blaster bolts hitting his body with no effect.

Final Words : So, we're getting towards the end of the season, and we seem to have pretty much wrapped up the ground battle part of the battle of Muunilinst. With Ventress incoming in a fighter, I guess next episode we're onto the space battle and Ventress vs Anakin. Which I don't see going well for Ventress, as Anakin is supposedly one of the best pilots in the galaxy, and while she's a great swordswoman, we've not seen her piloting skills at all.