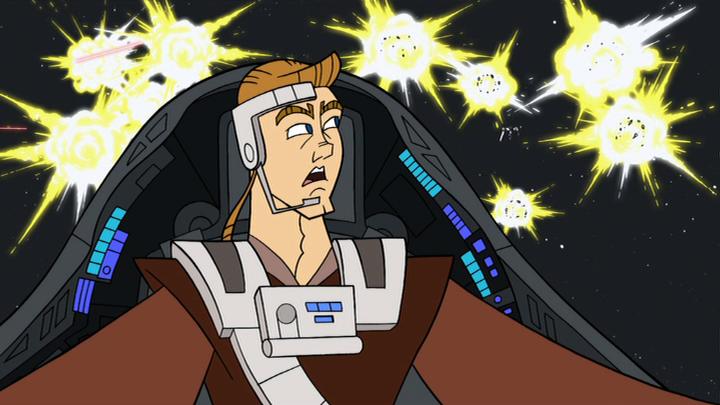 What is it ? : Above Muunilinst a massive battle rages, as hundreds or possibly thousands of V-Wings and Droid Starfighters clash, and Anakin agilely loops his fighter around the surface of the larger ships chasing down a couple which had been attacking him.
He is then attacked by a further three, but easily defeats them as well.
But he is outnumbered by many hundreds of fighters arrive and attack him, and he orders the Clones to fire their missiles in front of one of the Acclamator cruisers, luring the droids into the explosions and destroying them.
As some of the missiles lock onto him, be lures the missiles towards a Separatist space station, destroying it from within. As the Clones report that all the space platforms have been destroyed, suddenly many of their fighters explode around Anakin, as another fighter, recognisable as Asajj Ventress's, joins the battle.
Anakin declares that "This one's mine" as he and Ventress charge towards each other and the episode and season end. . .

High Points : The action is good, and Anakin's tactic of luring the Droids into a swarm of missiles fired by the Clones is a good one, and the fact he then races into the open hangars of the space platforms takes advantage of an obvious weakness of ships in the Star Wars Universe. As well as being a nice connection to his piloting in The Phantom Menace as his flight through the platform is extremely similar to the ending of that movie.

Low Points : I'm not impressed by the way the series handles starfighter combat, with the camera hanging far away from the combatants and showing us small dots firing at each other. In the movies we tend to be in the action, the camera focusing on the heroes and keeping us close and involved with the danger they're in.
But this technique just makes the combatants look like computer game sprites, something which is only enhanced by the way they move so suddenly as if a player is just smashing the controls in a video game.

So what do you really think ? : It's an odd way to end the season, as the battle of Muunilinst is basically over, but we're being drawn into the combat between Anakin and Ventress, leaving us on a cliffhanger. I can only guess that the second season was being made at the same time, so they could guarantee continuing the story.

Final Words : Well normally I'd take a break of a week between seasons of a tv series when I'm working my way through it. But Clone Wars 2003 is so ridiculously short that I'm not going to do that this time, and we'll continue into Chapter 11 next week (wait a second . . . isn't chapter 11 something that companies do when claiming bankruptcy?)
Anyway, back next time with Anakin's pursuit of Ventress.