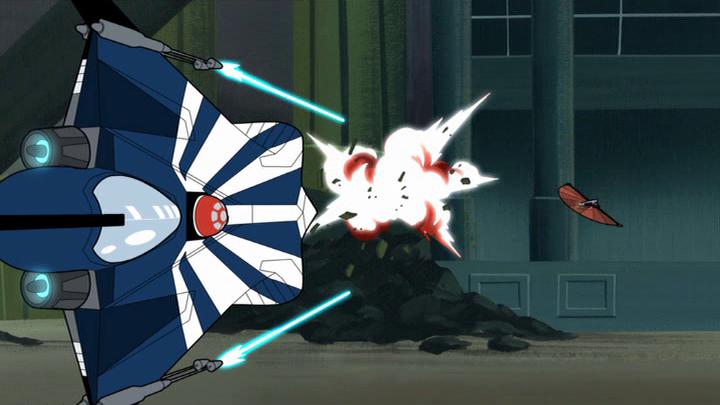 What is it ? : So we begin Season 2 of Clone Wars 2003, and we pick up exactly where we left off, with Anakin and Asajj Ventress clashing in their starfighters above Muunilinst. Their fighters swoop past each other several times, before Ventress leads Anakin down towards the planet, where he chases her through the streets of the city, soaring over the heads of Obi-Wan and the Clone Trooper army which now occupies it.
After leading him around for a while, she races for space to jump to Hyperspace, and Anakin follows, with Obi-Wan ordering him not to. Anakin pretends that Obi-Wan's signal is breaking up, and jumps away as well.
The Clone Troopers inform Obi-Wan that they've tracked the jumps, and Obi-Wan orders a squad to follow in a transport.

High Points : There's not a whole load of story to this episode, but there's a lot of action, and once they get down into the city streets it's extremely well done.
And I've not really commented on the dialogue in this series at all, but I have to complement one section of dialogue between Obi-Wan and the Arc Trooper commander as Anakin and Ventress steak overhead.
"Obi Wan: What was that?
Arc Trooper: I don't know general!
Obi Wan: That's not one of ours!
Arc Trooper: No general!
Obi Wan: That's Anakin!
Arc Trooper: Yes general!"
It's not clever dialogue but it did make me laugh out loud.

Low Points : While the chase through the city streets is great, I can't say that for the initial skirmish in space, as the two combatants just repeatedly fly past each other shooting, handbrake turn, and then repeat.
It would have been nice if the action in space could have been made a bit more interesting, perhaps with Ventress maneuvering to put some of Anakin's own forces in the way of his attacks, but we don't get that, we just get them flying past each other again and again, like they're jousting.

So what do you really think ? : The action on the planet makes this an entertaining episode, but there's not a lot else to it.

Final Words : So, next episode we move away from the Anakin vs Ventress combat which seems to now to be the main storyline given the battle of Muunilinst is won. And we're not going to come back to it until the end of the season.
But, we get one of the most memorable storylines in the series coming up, so while I'm annoyed at having to wait for the resolution of this storyline, at least I'm looking forward to that.