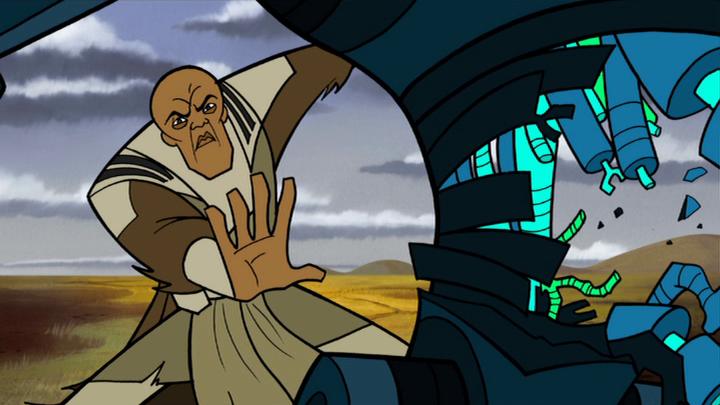 What is it ? : We pick up with Mace Windu surrounded by thousands of B2 Super Battle Droids, and he pushes out with the force and the droids all fly away in a giant wave. He leaps at battle droids, punching them in a flurry of incredibly speedy blows which pummel them as he speeds between different droids.
Again and again he destroys droid after droid using only his fists, but the Seismic Tank hammers the ground again, and Mace leaps over the wave of dirt that is forced out.
Mace begins reaching out with the force, as he gestures at droids, causing explosions as the innards of the droids are forced away from where he gestures, blasting the droids open. As one exploded into shrapnel, Mace grabs the shards, and uses them like a giant shotgun blast to tear through and destroy dozens of other battle droids.
The Seismic Tank fires again causing yet another blast of dirt, and as Mace leaps through it, he spots the gleam of metal which is his lightsaber, and he pulls it in his hand. Landing and igniting his saber he deflects dozens of blaster bolts, he leaps towards the Seismic Tank and begins cutting through its hull.
Battle Droids gather inside as his saber begins cutting through the wall, to no avail, and the command droids aboard the tank detect explosions throughout the vehicle, and Mace charges onto the bridge, using the force to push them all out of the viewing window.
We see once again the young boy from the beginning of the last episode standing and watching the tank as it ruptures from many internal explosions and drops down onto the ground, the impact causes the massive vehicle to break apart and be consumed by explosions.
The boy watches as Mace leaps from the vehicle in the distance, and lands next to him, so offers him a drink from his canteen of water. Mace takes it and smiles before leaping back to the battle.

High Points : It's over the top, it's ridiculous, but it's amazing. This is Star Wars does Fist of the North Star, as Mace goes into super martial artist mode, exploding droids with flurries of punches, tearing them apart with gestures, and creating waves of their innards to use as shrapnel to destroy other droids.

Low Points : This is the most stupid Jedi powers have ever been. If every Jedi can fight like this, then why does anyone else even bother fighting? Mace takes out thousands of droids in this episode single handed, and we don't even see a single other ally helping him, not a single Clone Trooper, nothing.
It's all just a bit silly to tell the truth.

Final Words : These two episodes are definitely what I consider to be the high point of the series, and the ridiculous nature of the spectacle is probably why they're always mentioned in any conversation about the series.
Well, next episode we're off to another new story of the Clone Wars, featuring characters we're probably not that familiar with.