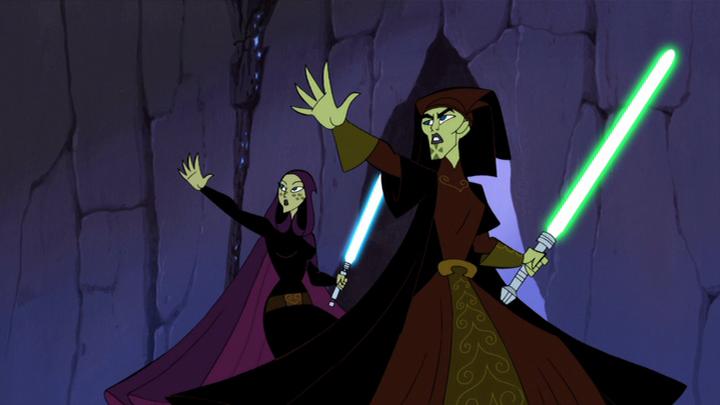 What is it ? : We begin with an icy planet where the wind is blowing snow across the screen, when a meteor impacts the planets surface and a legged probe droid crawls out of the crater, reminiscent of the beginning of The Empire Strikes Back.
Inside a cave which glitters with crystals we meet Luminara Unduli and Barriss Offee, where Offee is using the force to assemble her first lightsaber. Unduli tells her padawan "All are intertwined: the crystal, the blade, the Jedi. You are one.", and congratulates her student on completing her training.
When they sense there are intruders and discover the probe droid and dozens of others like it planting explosives to destroy the site and deny the crystals within to the Jedi.
The two Jedi fight the droids, parrying their laser blasts and using the force to grab the planted explosives and hurl them at the droids destroying many.
However there are explosions which bring the caves down upon the two Jedi, who drop to their knees holding the rubble above them with the force as more collapses burying them.
However, Yoda is aboard Padme Amidala's yacht, and senses the disturbance in the force, ordering the vessel to change course and rescue the two Jedi.

High Points : There's a few things I quite like about this episode, like the legged Probe droids being a more primitive version of the one seen in The Empire Strikes Back, and the introduction of the Kyber Crystal caves on Ilum (a planet which will eventually become Starkiller base).
But there's nothing major I can point at and say that I love about this one, just some minor points which anchor is firmly within the Star Wars universe and show that some thought and love went into it's production.

Low Points : Given we just saw Mace Windu destroying ridiculously large amounts of Battle Droids last episode, it makes me wonder how weak in comparison Unduli and Offee must be to have to fight these probe droids in such a conventional manner.

So what do you really think ? : Again we've got a better manner of splitting a story than we got last season, with this episode leaving Offee and Unduli buried and trapped, rather than the first seasons method of completing a story, then just start up again in the next episode with a sequel. It's a noticable and appreciated improvement in the writers skill.

Final Words : There's nothing offensive in this episode, but nothing to write home about really either, definitely not an episode I'd mention if recommending Clone Wars 2003 to a viewer.