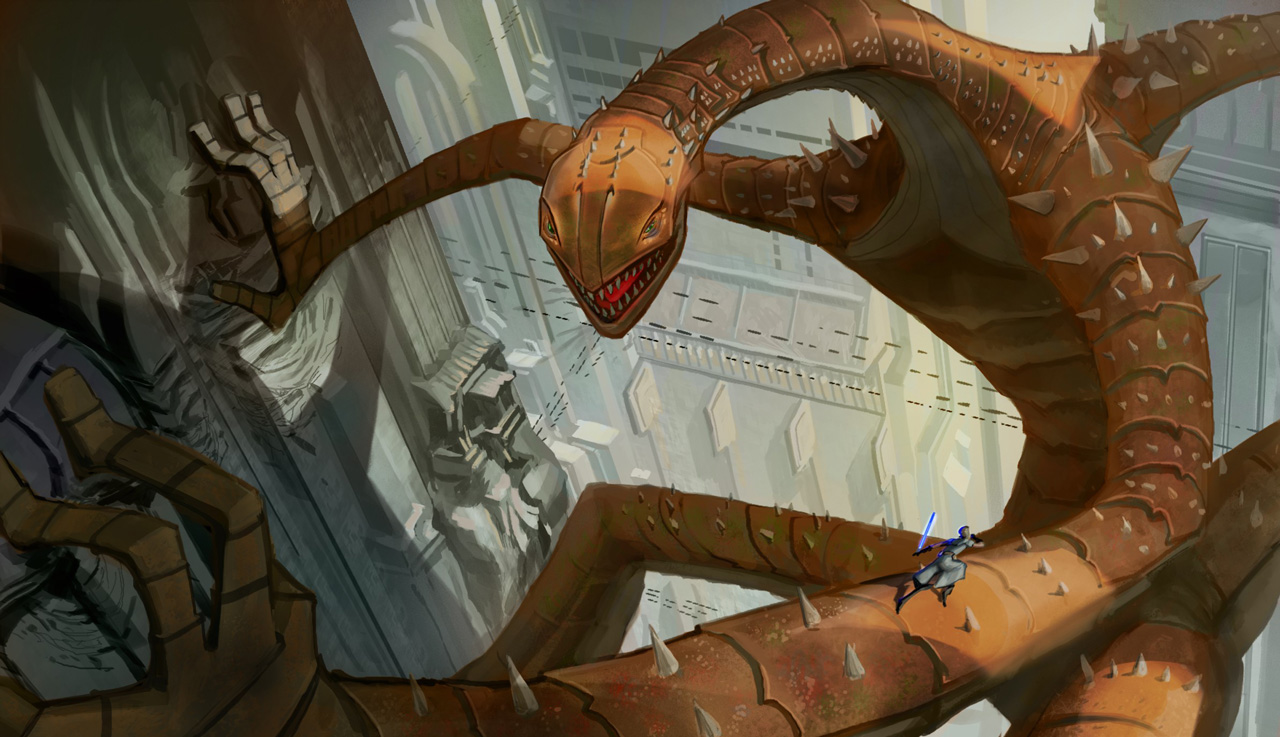 What is it ? : The Republic is testing a new weapon, the Electro Proton Bomb, an anti-droid weapon which shuts down technology, but doesn't harm living beings on Malastare. The Dug inhabitants are being invaded by the Separatists, and have promised to join the Republic and provide fuel for the fleet if the invasion is turned back.
Mace Windu and Anakin are overseeing the testing of the new weapon, which is successful at deactivating the Droid Army, but awakens a giant monster from beneath the surface of the Planet. These Zillo beasts roamed the planet killing the ancestors of the Dug inhabitants but were believed extinct. The Dug's want the creature killed, while Mace Windu wants it relocated because it is a unique creature.
The Dug's attempt to kill the beast, but Mace's point of view wins out in the end and the creature is knocked unconscious and prepared for relocating to a new home, but Palpatine steps in and wants it experimented on as a possible weapon due to it's massive strength, and energy weapon resistant skin.

High Points : The action in this episode is outstanding, with the battle leading up to the testing of the weapon realised extremely well, and the fight against the Zillo Beast in the pit being action packed and exciting, especially Anakin in his starfighter in the enclosed space of the pit. The creature scaling the walls of the pit as the pour fuel onto it, is very well realised as well, the Zillo Beast returns next episode, and I'm looking forwards to it even if it is a total Godzilla rip off.

During the battle at the start of the episode, my 12 year old son pointed out that Clone Commander Rex is invulnerable in combat. While Clone Troopers around him were being hit by the storm of laser fire, he stands there out of cover without being hit, my son termed this "Deus Rex Machina", which I loved and had to mention.

Low Points : Just a few nit-picks as I mainly enjoyed this episode.

The Electro Proton Bomb (I can't help but say that name in the bombastic way of the announcer at the start of the episode) is used way too late. For some reason they wait until the droid army is engaged by the Clones, and in fact they wait until the Smaller Clone Army is about to be overwhelmed before testing the weapon. Wouldn't it have been a lot more sensible to drop the bomb on them when they were still miles distant?

The Republic is terrible at signing treaties. The deal they make with the Dug's, is that after they've saved the planet from the Droid invasion. And part of the tension of the rest of the episode is that the Dug's want the Zillo Beast killed, Mace Windu doesn't, but the Dug's won't sign the treaty unless they kill it. Surely the more sensible deal with Malastare would have been, the Clone Army protects the Republic from the Droid Army, join up and we'll protect you, however if you're not part of the Republic, you're not our problem. Get the deal signed when you've got the power, not hope it gets signed after you've done them a favour.

Mace Windu makes a big fuss about not killing the Zillo Beast because it's the last of it's kind, and that it's wrong to kill something unique. Surely morally speaking, it's equally bad to kill a creature whether it's unique or one of 7 billion? He happily cuts down other creatures with his saber, but this unique monster he gets all uppity and moral about.

The Electro Proton Bomb shut down all technology, mainly effecting the droid army, however it is shown that the Clone Troopers Walkers and weapons shut down too. But this is never touched on further, they almost immediately have LAATI's transporting them, the Clone Troopers have working blasters, and the Jedi's light sabers are working, without even mentioning it.

Anakin is in this episode, but not Ahsoka, how's he meant to be her teacher when she's absent half the time, and sadly her moral compass would probably have made the Mace, Dug Government disagreement about killing the Zillo Beast a little more believable and interesting.

So what do you really think ? : I enjoyed this episode, a nice action packed episode with an interesting side effect from using a new weapon. I think I would have enjoyed it a little more if they'd had to deal with the fact that the weapon shut down all their weapons, vehicles and equipment as well, and they were having to fight the beast with most of their technology absent.

Final Words : I'm really looking forwards to the next episode "The Zillo Beast Strikes Back", and am pretty disappointed there isn't a later episode "Return of the Zillo Beast", this was a definite improvement over the last couple of episodes.