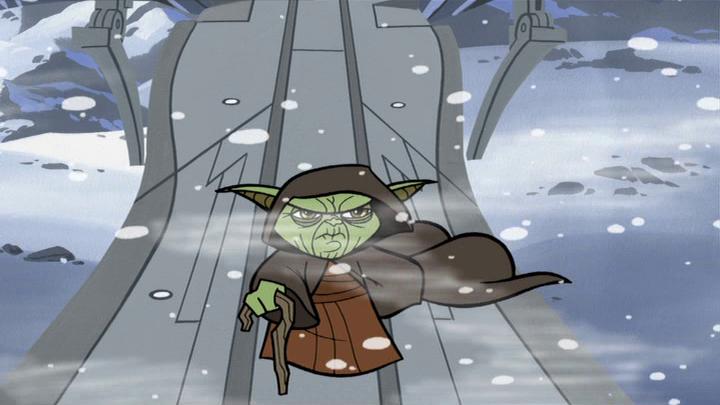 What is it ? : We pick up with Yoda having just received his vision of Luminara Unduli and Barris Offee being in danger, and he informs Captain Typho and Senator Amidala about the need to rescue the two Jedi. However Captain Typho doesn't want to put Amidala in any danger, so objects.
But Yoda uses the mind trick to force Typho to change his mind, which Amidala finds amusing and agrees to head to Ilum to help.
Arriving on the icy work, Yoda leaves the ship and soon detects danger, whipping out his lightsaber and destroying several cloaked Probe Droids.
He battles his way through dozens of the droids, luring them out onto a cliff edge where he uses the force to pull down an avalanche on them, heading into the cave once they're all disabled.
Inside he uses the force to lift the fallen rocks presumably where Offee and Unduli are buried alive.

High Points : The artistic style of this version of the Clone Wars has always been an interesting choice, rather than something stunning. But I do have to complement the sections with Amidala's ship flying through space, they are so stylised and look stunning with the stars streaking past.

And I also have to complement that the writers are finding a large variety of ways for Jedi to defeat their opponents rather than just using their lightsabers all the time, with Yoda pulling down an avalanche in this episode, it does stop the action becoming boring.

Low Points : The fact that Amidala and Yoda are completely okay with Yoda manipulating Typho's mind at the start of the episode I found objectionable. It shows a total lack of respect for the man, and a lack of respect for free will.
And I'm disappointed that Yoda has to do this anyway, because rather than showing the little Jedi master as an intelligent and convincing sage, it just makes him look manipulative and bullying.


So what do you really think ? : There's not much happening in this episode, with almost half the run time devoted to forcing Typho to allow Amidala's life to be put at risk. I hope the next episode is worthy of this episode being set up of Yoda and Amidala being on Ilum.

Final Words : I've probably complained of Clone Wars being all action and no storyline in previous episodes, but if this is an example of what spending half the episode on story does, then I admit I was totally wrong.
Anyway, back next episode with some Amidala action, which hopefully will be a bit better than this one.