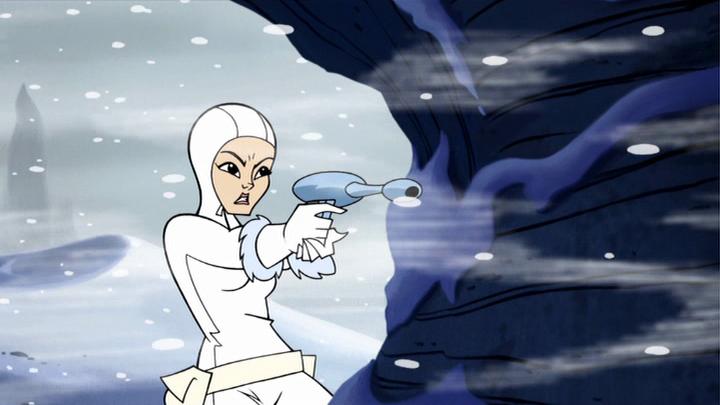 What is it ? : Padme Amidala, Captain Typho, C3-PO and R2-D2 are waiting at Amidala's transport awaiting Yodas return from rescuing Barriss Offee and Luminara Unduli. Typho mentions communications are working poorly because of the weather, as Amidala observes the Jedi cave with her electrobinoculars.
Typho returns to the ship to check the communications array, and Amidala asks R2 about his sensors, then orders the droids to accompany her as she searches for Yoda.
Soon R2 warns her he senses something approaching, and blaster fire comes out of the blizzard surrounding them, so Padme throws her cloak to distract the enemy, and destroys one with her blaster. Ordering C-3PO to retrieve her cloak, the cloaked droids fire at him, allowing her to destroy the others after their location is revealed.
R2 detects something else coming through the storm, and as they wait for attack Yoda, Unduli and Offee emerge from the snow storm.

High Points : This episode passes without really anything much happening, so there's nothing much to complement here, especially considering that it amounts to nothing more than Amidala wandering away from her ship, putting Threepio's life in danger, and then meeting Yoda.

Low Points : But speaking of putting Threepio's life in danger, what the hell is Amidala thinking, she sends him out to "get her cloak", knowing that the cloaked droids will open fire on him. It's almost as if she knows he's a major character so can't die here. But if she knows that, she should just wander out herself.

I also don't really know what she hopes to achieve by following Yoda to the Jedi cave. While in the past she's proven to be a capable individual, if there's something Yoda can't deal with, then she is definitely in deep trouble.
Oh, and Typho is just rubbish at his job of keeping her safe, since Amidala and the not exactly sneaky R2-D2 and C3-PO all manage to wander away from the ship without him noticing.

So what do you really think ? : This episode really feels like filler, nothing really happens, and if the last episode had shown Unduli and Offee being rescued by Yoda this entire episode could have been skipped.
It really only seems to exist so that Amidala can have done something in the series, since it's been pretty much a boys only club up until now, but surely Offee and Unduli tick that particular box.

Final Words : And next episode we get back to the Asajj Ventress / Anakin Skywalker plotline, which seems to be the central plotline of the series.