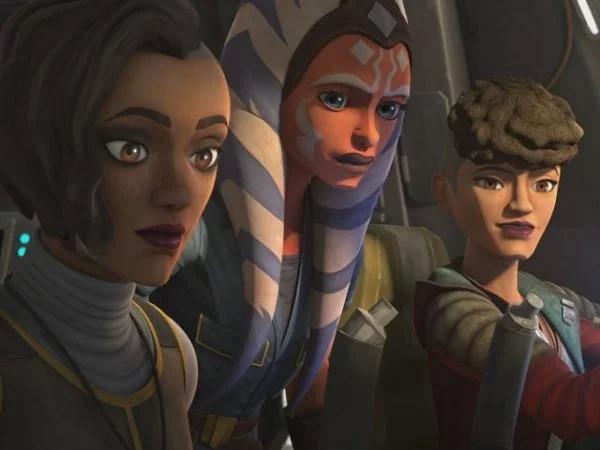 What is it ? : Ahsoka and Trace are working on Trace's ship, the Silver Angel, a name which Ahsoka finds ridiculous when Trace's sister Rafa arrives. Rafa has a deal which involves them using Trace's ship, but it becomes apparent that Trace wasn't her first choice.
They take the ship into space, narrowly avoiding a Republic Star Destroyer and discovering that Trace has no pilots licence and wasn't even aware that you needed such a thing, having learnt to fly just based on piloting speeders. Wullf Yularen in charge of the Star Destroyer wants to arrest the crew of the ship, but Anakin senses Ahsoka's presence, and orders him to let them go.
Once in space, Rafa tells them that the deal involves going to Kessel and picking up a load of Spice for delivery, claiming that it can be used for medicine, so may not be an illegal deal. Ahsoka isn't happy, but Rafa convinces Trace that it's a good idea based on them trusting each other.
Arriving on Kessel they disembark hovering next to a luxurious building in a wooded area of the planet, and meet with the representative of King Yaruba, who takes them to a banquet to seal the deal who assures them that the spice is used in making medicine used across the galaxy. Afterwards they head to the mines to collect their cargo, and Trace is impressed with the number of droids working away below, when Ahsoka points out that they're actually slaves.
As they take their cargo and leave Kessel, Rafa tells them that the cargo is to be delivered to the Pyke Syndicate, a criminal empire. Ahsoka is now convinced that the spice is illegal, and tries to talk Trace and Rafa into taking it to be turned into medicine, where Rafa points out that they now owe a lot of money (30,000 credits) to people who will take Trace's ship.
Panicking about people taking her ship from her, Trace dumps the cargo, which causes both Rafa and Ahsoka to freak out as they now have no bargaining chips at all, so Ahsoka comes up with a plan.
Arriving at the Pykes, Ahsoka uses the force to convince their leader to hand over the money, and to not check the cargo containers, but one suspicious aide checks and sets off the alarm. As the three try to escape they find themselves surrounded by gunships and locked into place with tractor beams.

High Points : There's quite a lot of set up in this episode, and virtually no action, which leads to it feeling like it moves quite slowly, although there's no lack of things going on. But this smaller more personal focus, while is excellent for fleshing out Ahsoka's story after she leaves the Jedi Order, does feel small and quiet.
So I'm torn between it being very right for the character, but totally wrong for the epic build up to the end of the series.
But, despite this, I did find it an enjoyable episode, but one which would have been more suited to the early part of one of the early seasons.

I have to comment on the scene where Anakin senses Ahsoka flying past the ship, I did quite enjoy that they've purposely mimicked the scene from Return of the Jedi when Vader senses Luke flying past. The dialogue and setting is a fairly close match, and although it comes close to just being fan service, I thought it was subtle enough to get away with it.

Low Points : Now most of my complaints about this episode, apart from it being a bit slow and small in scope, are pretty minor.

For example, why is Ahsoka so bothered by the name of the ship being the Silver Angel, Anakin's fighter in the other Clone Wars series was called the Azure Angel, is this a direct stab at the older series that I'm misjudging? Or did they just forget?
And later in the episode when Rafa points out that they owe 30,000 credits, and the ship will be taken to pay the debt, I find myself having to ask, is the ship really worth that much? It seems overly expensive for what appears to be a bit of a piece of junk. But also, why are these two people who are scraping together money through dodgy deals and scams in ownership of a starship worth 30,000 credits. Especially when until this episode it was just costing them money to store in a hangar?

A joke is made about the ship vibrating in Hyperspace and almost shaking itself apart when Trace realises that the air brakes are on. Firstly isn't this just the same joke made by River Song in Doctor Who about the Tardis brakes being on all the time, and Secondly, air brakes? in space?, in Hyperspace?
I'm no aeronautical engineer, but even I know that's not how air brakes work.

When they arrive on Kessel, they firstly land at the Kings castle set in an idyllic wood. Since when did Kessel have forests? I thought it was basically a rock in space? And in Solo: A Star Wars Story, the Pykes ran the spice mines! But here they're run by a King? I'm a little confused.

So what do you really think ? : Despite my misgivings, it's an enjoyable episode, and quite fun. And I really liked the innocent way that Trace solves the problem of carrying Spice, by dumping it, which just makes the situation worse. I have to admit facepalming for her at that moment and exclaiming, "No!"

Final Words : While from where the episode ends, I'd guess the next episode will be about them escaping from the Pykes, but it's name "Dangerous Debt" makes me think that perhaps they're going to be given a chance to earn their way out of the debt by performing some even more dangerous task. Which would be interesting in making Ahsoka slide into the criminal underworld to help save the two sisters she is accompanying.
But we shall see next week.