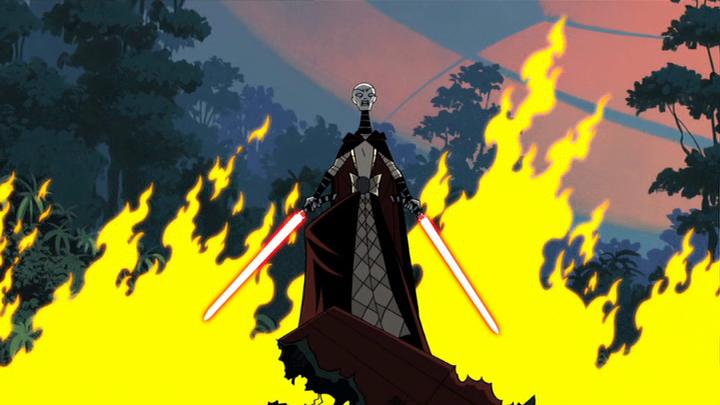 What is it ? : So we pick up again with Anakin following Asajj Ventress through space after she attacked the Republic forces at Muunilinst. They arrive at Yavin IV, and Anakin follows her trail after she lands so also sets down to search the area, leaving his fighter he begins moving through the Jungle when he hears the noise of a larger vessels engine arriving, so he returns to the clearing.
A Republic Transport lands and a squad of Clone Troopers disembarks, and Anakin confirms with them that Obi-Wan sent them, displeased that his master should think so little of him to send aid.
But he orders the Clone Troopers to help searching for Ventress, but they one by one begin getting taken out by an unseen opponent. Anakin senses something is wrong, and once again returns to the clearing, this time lured there by the cries of a Clone Trooper, who he witnesses dying as the Transport explodes.
He shouts out a warning to his Astromech, but his Starfighter also explodes, and the Astromechs head lands at his feet. From the flames emerges Ventress, and tells her she'll pay for what she has done, but she responds that his fall with be her ascension into the Sith.
The two begin to fight, Anakin's single blade against Ventresses twin sabers.

High Points : Although it's almost all set up for a fight between Anakin and Ventress, it's pretty tense, and the way that Asajj takes down the Clone Troopers one by one in the jungle is impressive.
And although it just really explodes, I did like the design of the CR-20 transport that the Clones arrive in.

Low Points : Although it's just trying to build up Ventress as a dangerous opponents, I would like to have at least seen how she manages to blow up the Republic Transport and Anakin's Starfighter, even if we just saw explosives beeping away before they exploded. Than at least we'd know she'd sneakily attached the explosives (or maybe levitated them into place), but all we actually see is the ships exploding, so I am left wondering if she has a new ship exploding force power, or if it's as I presume above!

There's also a really weird animation choice when the Clone Troopers emerge from their ship, as the frames of animation seem to be far lower than the rest of the episode. So the Clone Troopers seem to move in a very cartoonish fashion, which reminded me of the Ants in a Tom and Jerry cartoon or similar.

So what do you really think ? : As I've said above, it's all set up for the fight between Anakin and Ventress, so I do find it a little weird that we actually see the first few seconds of that fight, rather than just leaving us as they ignite their sabers.
The Clone Troopers go out like chumps, and that disappoints me, but only because I've become used to them being characters from the more modern Clone Wars series, and expect them all to have some level of competency like Rex would have.

Final Words : So we've got the next 2 episodes dealing with the fight between Anakin and Ventress, and I wonder if they'll manage to break the fight into 2 segments with the higher skill they've displayed this season, or whether we'll get 2 seperate fights pasted together as they did last season. It'll be a good sign as to whether they actually learned how to write better episodes or not between the 2 seasons.