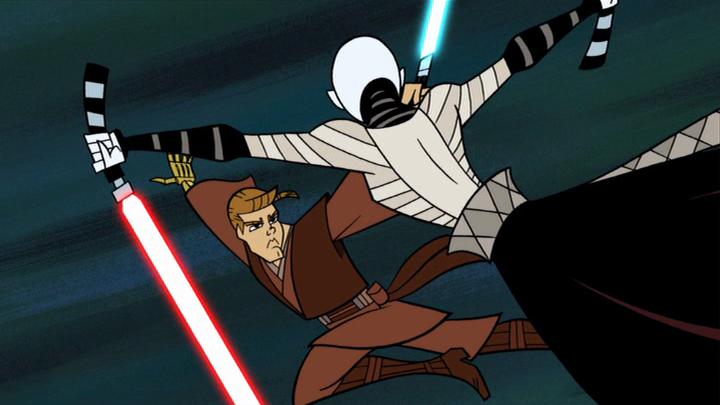 What is it ? : Anakin and Asajj Ventress fight in the jungle of Yavin IV, their lightsabers clash together as they slash at each other. Ventress pulls branches from the ground to unsuccessfully distract Anakin, but he cuts his way through them, and Anakin pushes her away.
After a few moments of fighting, Anakin manages to disarm Ventress, and she leaps into the tree cover above, using the force to pull her sabers back to her, and Anakin leaps into the trees to search for her.
Ventress in concealment collapses the branch that Anakin is standing on, causing him to plummet from the trees, but he pulls a vine to him and begins swinging to safety, but Ventress speedily cuts the vine.
Eventually, they exit the foliage and Anakin follows Ventress to the roof of a Massassi temple. Ventress hurls stones and masonry at him, then Force-pushes Anakin across the ground. His clothes torn and tattered, he stands and faces his enemy. As it starts to rain heavily, the two combatants stand motionless, lightsabers at the ready as raindrops sizzle and vaporise on their blades..

High Points : The episode flows nicely from the last, and seemingly well into the next, allowing this lightsaber fight to continue over three episodes, they've really learned the lessons from the clunky multiple episode battles last episode.

And the fighting itself is really imaginative and interesting, with items getting hurled at each other and force push being used, but once it move into the trees it really gets into its own. With Ventress really using the environment against Anakin, but even though she is more creative in her strategies, he does seem to be more powerful.

Low Points : There's nothing really to criticise, except it's just an episode of two people trying to hit each other . . .

So what do you really think ? : The creativity of the fight I found really engaging, even if there's nothing much going on in this episode. There's not even really any stakes in the episode except they're trying to kill each other, and I think if someone else's life was at stake as well, or Anakin had to win to stop Ventress doing something evil, it'd give some weight to what amounts to nothing more than the two trying to hit each other and failing.

Final Words : So the fight carries on to a third episode, when presumably Anakin will triumph and return to Obi-Wan, but since Ventress returns, I'll be interested to see how that happens, or whether they just forgot about the events of this skirmish (which would in itself be interesting, as the more modern Clone Wars series never re-establishes Ventresses origins, leaving this series as her introduction to the lore).