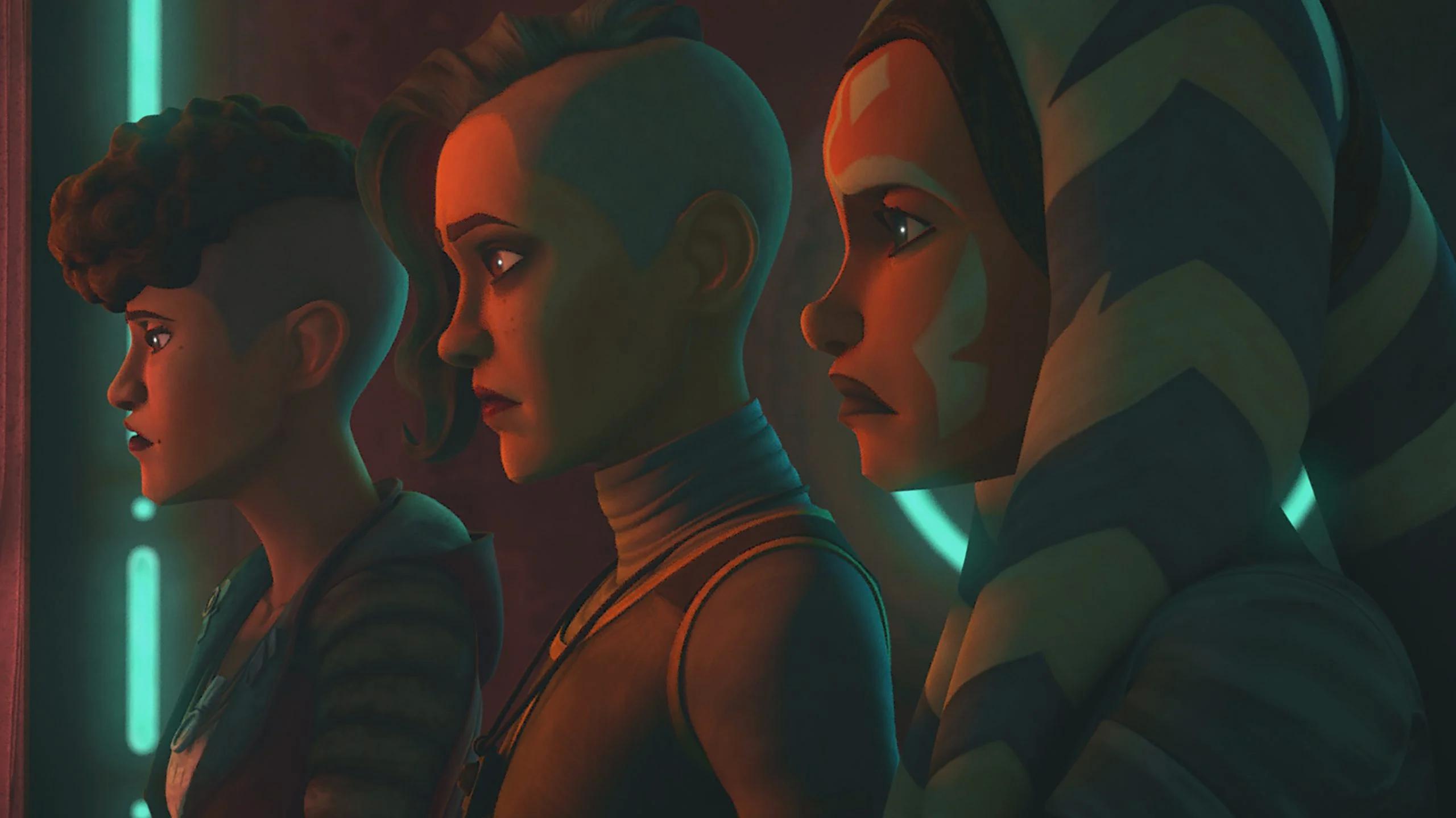 What is it ? : Ahsoka, Trace and Rafa are prisoners of the Pykes on Oba Diah, and are held inside a jail cell with an energy field covering the entrance. The Pykes come and take Rafa away and torture her, while Ahsoka and Trace discuss helping people, and Trace tells Ahsoka she sounds like her mother.
Rafa is returned to the cell and Trace is taken away for torturing, and Rafa and Ahsoka continue the conversation about helping people, and Rafa tells her she sounds like someone she knew, and Ahsoka reveals she knows who she's talking about. But Rafa then asks if Trace told her how her mother died, revealing that she died during the events when Ziro the Hutt was escaping from prison, and his men disabled a transport, and it plummeted towards a platform filled with people, so the Jedi redirected it into a wall, and behind the wall were their parents who died.
Ahsoka is affected by how callous the Jedi appeared to the sisters, even though the accident wasn't the Jedi's fault. And she uses the force to activate the controls of the cell and open the force field, and she and Rafa begin fleeing through the complex.
Meanwhile, Trace pretends to faint in shock at the sight of the torture droid, grabbing a blaster and fighting her way out, encountering Ahsoka and Rafa, with all of them claiming to be on the way to rescue each other. They escape the complex, fleeing across a bridge being chased by some of the Pykes. The Pykes withdraw the bridge, and Rafa leaps across the gap.
Trace attempts the jump, but looks to be falling short, when Ahsoka uses the force to push her the rest of the way across. Ahsoka leaps, and Trace and Rafa think she has fallen, but she has force leaped behind them, and the three race for the gates out of the compound.
Rafa and Trace claim to provide a distraction, while Ahsoka opens the gates, but when she succeeds, she discovers the sisters pinned down by Pykes, and Ahsoka uses the force to grab the Pykes one by one and pull them out of cover into the fire of the sisters, allowing the three to flee into the city.
They spot their ship across the city, and start heading towards it, when a beggar asks them for money, but they turn him down. Moments later he asks Pykes searching the city for the three, and identifies them to the Pykes, who begin pursuing them again. As the three run, Ahsoka is spotted by three Mandalorians watching nearby, who discuss whether she might be an ally or a threat to their mission.
Rafa and Trace are caught, and taken by the Pykes who say they're going to execute them. Rafa tells them she'll tells them where the spice is, if they spare the two, but the Pykes tell her that they'll just get the location from Ahsoka when the recapture them. But Ahsoka steals an armed speeder and attacks, but the Pykes reveal that they kept the sister in the open to lure Ahsoka to their rescue, and they capture the three, who end up back in their jail cell.

High Points : My absolute favourite moment of the episode, I haven't mentioned above. During their escape from the Pykes, they release an Ithorian and a Nikto from their cell, who aid them in fighting the Pykes.
Later when they're in the city, the two spot the girls, and you see a flash of recognition before they slip away into the crowd. It's a tiny moment, but I loved that the characters came back, and we saw they managed to escape as well.

The action throughout is excellent, and I really enjoyed watching Ahsoka using her Jedi Powers to totally outmatch everyone, but doing her best to hide being seen using them.

Low Points : I've no real complaints about the episode really, except for the fact that Trace is ridiculously lucky, taking down supposedly skilled Pyke guards, when we've never seen her use a blaster before.
While, I can explain it through the whole "The Force is with her", and therefore she's basically plot powerful and invulnerable, but that is one of the more annoying parts of the Star Wars mythos.

So what do you really think ? : A solid episode, and one I really enjoyed, more than any of the other episodes so far this season, there's mystery to get you thinking (is the female leader of the Mandalorians Bo-Katan Kryze?), there's great action, some good dialogue and exposition of the history of Rafa and Trace (although I ask again, if the two are living hand to mouth as they claim, then why do they own a 30,000 credit starship?).
Even the Pyke trap for Ahsoka, makes a massive amount of sense, and as I said above, I adored the Ithorian and Nikto prisoners.

Final Words : So, I'm beginning to wonder if we're actually getting Clone Wars first 8 part story arc? If the Mandalorians end up rescuing Ahsoka and the two sisters, to obtain her help during during the battle of Mandalore. Leading to the three heading into the final four episodes, and the sisters helping Ahsoka escape following order 66.
But anyway, next episode is "Together Again", so we'll see what happens then.