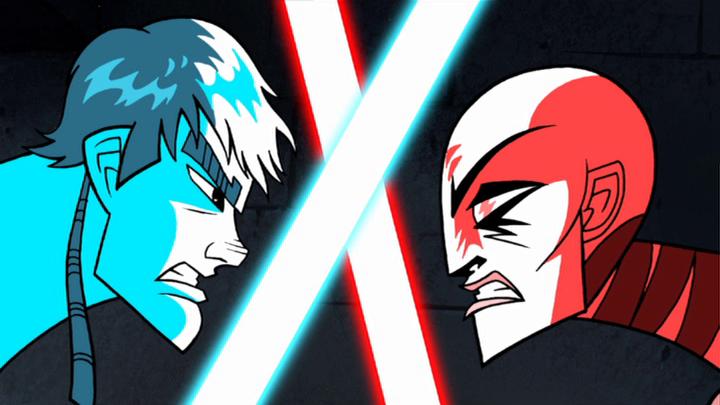 What is it ? : Anakin and Ventress face each other through the rain on Yavin IV, Ventress high atop one of the temples, and Anakin beneath, their lightsabers sizzling as raindrops fall on them, and rain running down their faces.
Anakin leaps high onto the top of the Temple, and the two trade blows for several seconds until Anakin uses the force to push Ventress off the building. He follows her into the temple, and they resume their fight, using the force to hurl masonry and rubble at each other. Anakin pushes Ventress through a wall, and they continue to fight as Ventress backs her way up the steps high onto the Temple.
Ventress knocks Anakins saber from his hand, and she goes in for a killing blow, but Anakin grabs her hand with his Cybernetic one, and crushes it, causing her to drop one of her sabers. Which Anakin lifts with the force, attacking Ventress with a furious flurry of blows, his face contorted with anger.
As each blow lands, there is a flash of Yoda, Qui-Gon and Obi-Wan, until the ledge collapses under Asajj's feet and she disappears down into a chasm. Screaming with rage, Anakin hurls her lightsaber into the darkness where she has fallen.

High Points : An excellent episode, which manages to pack a lot into it's extremely brief running time, we get Anakin and Asajj using various types of combat against each other, and Anakin succumbing to his rage and anger to defeat her.
Whether Ventress planned it or not, this is definitely what Palpatine planned when he sent her after Anakin, leading him another step down the path to the Dark Side.

The pause at the beginning of the episode is likewise truly excellent, the two combatants pausing in the rain, each drop running down their faces, or sizzling as it is vaporised by their lightsabers. It's an intense moment, and one quite beautifully animated.

Low Points : I suppose my only real criticism here doesn't come from this episode, it's the fact that Ventress returns from this story. She obviously falls to her death, and Star Wars had never worked that way in the past, because even though Vader returned after being defeated in Episode IV, he was clearly seen to have survived and flow away. Star Wars isn't Batman, where a villain seemingly dies, and then pops up again next episode having mysteriously survived.
(Although that said, Palpatine does very much the same thing in Rise of Skywalker, returning after falling down a deep put, so . . . )

So what do you really think ? : I definitely enjoyed this one, and the way the fight was cut over three episodes was excellent, definitely displaying that they'd learnt their lessons from the first season where each episode's fight was self contained, and then just had a sequel fight start a few minutes later.
This season, they'd broken the fights at sensible pauses in the action, which also has the advantage of keeping the tension up, and making the viewer want to return to see what happens next as they are already emotionally invested in the action.

Final Words : So, one more episode of season 2 of Clone Wars 2003, and it's the last with the 3 minute format they've been using, as season 3 moves up to longer 12-15 minute episodes.
And we've also got the introduction of General Grievous before he was seen in the live action movies . . . .