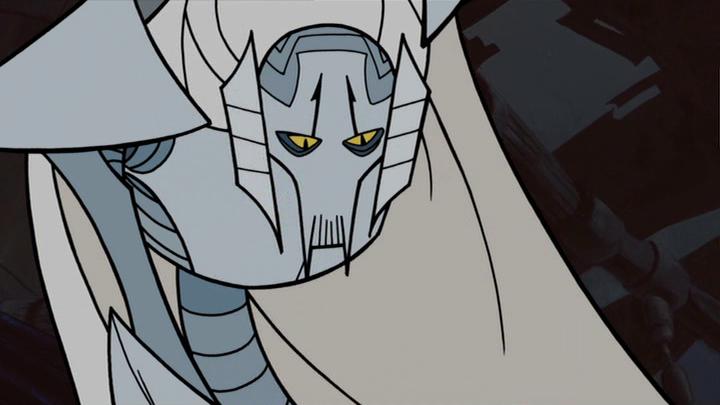 What is it ? : Back on Muunilinst the Separatist forces have surrendered, and Muun and Neimoidian Prisoners of War are being processed, when Captain Fordo informs Obi-Wan that a ship matching the one Anakin was following is approaching.
Obi-Wan senses that it's not hostile and orders them not to fire, allowing the fighter to land, and Anakin to emerge. He apologises to Obi-Wan, telling him that it was a trap as Obi-Wan had thought, but he emerged triumphant. But Obi-Wan tells him that the fight should never have happened, but is interrupted by a signal from a Jedi Master who tells him their forces on Hypori have been wiped out by a new Droid General.
On Hypori, the Jedi's dead hand drops his comlink, which is then crushed by a clawed Droid Foot, and we see a crashed Acclamator surrounded by Battle Droids firing at the wreckage, until a clawed Droid Hand signals for them to stop.
Inside, a group of Jedi are hiding, Ki-Adi-Mundi, Shaak Ti, K'Kruhk, Aayla Secura, Tarr Seirr, and Sha'a Gi. They wonder how they could have been defeated by mere droids, when a voice calls out for them to prepare to die.
As the tension builds, and footsteps can be heard approaching, the Jedi begin to show signs of fear as they cannot detect where the approaching figure is coming from, when Sha'a Gi breaks and charges out into the open, where he is instantly crushed by the metallic frame of General Grievous.
He instantly leaps out of sight, dropping down into the midst of the Jedi, they fight him, but his speed allows him to parry their attacks, and using the spinning moves he is famous for, he downs K'Kruhk, and then snaps Tarr Seirr's neck. Hurling Aayla Secura across the chamber, he is held off by Shaak Ti for a few moments before being hit and thrown into the wreckage. Ki-Adi Mundi is disarmed, but as he attempts to pull his saber back to him, Grievous grabs it with his foot, fighting with three of his limbs while standing on the fourth.
Ki-Adi pulls one of the sabers from Grievous's belt to his hand and prepares to defend himself as Grievous leaps towards him.
Meanwhile back on Coruscant, Yoda senses the combat, and comments "Mmm. Darker, the coming storm grows. I fear the dark cloud of the Sith shrouds us all."

High Points : A great introduction for Grievous, with him being a credible threat to the Jedi. Although he shows some of the sillier moves that he displays in the movies, here he is a fast moving and stealthy opponents, striking fear into the Jedi, and supplying enough surprises to make him different and interesting.

Low Points : I'm a little disappointed that they didn't carry through with the joke of having Shaggy out of Scooby Doo as a Jedi, as although Sha'a Gi looks like his counterpart, his voice is completely different, and makes me wish they'd gotten Casey Kasem in to do a voice for the character.

So what do you really think ? : I find myself wondering if I just witnessed Shaak-Ti dying again? Famous for having multiple death scenes, from a cut scene in Revenge of the Sith, to part of The Force Unleashed, she's died virtually every time she appears on camera.

Final Words : So we reach the end of season 2, which is the planned end of the series, and does end up being the last in this format of Clone Wars. With the much shorter Season 3 being made later, and having episodes 4 to 5 times longer and therefore having more time to tell it's stories.
We shall come back with that in a couple of days, and we'll see how comparable to the newer version of Clone Wars it is when they have a more equivalent running time.