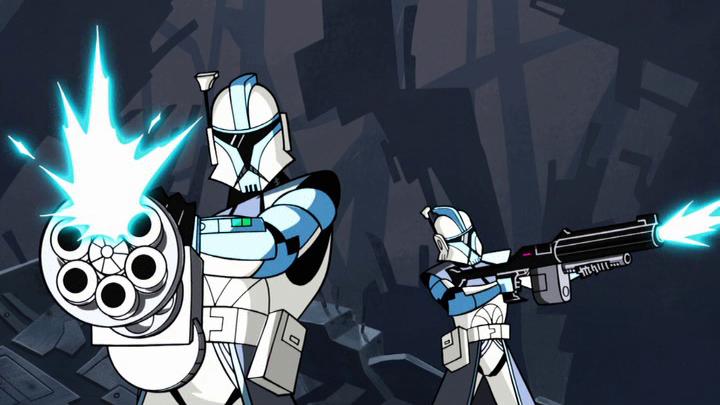 What is it ? : Picking up from the end of the last season, a customised LAAT/i swoops in over Hypori, dropping grenades into the droid forces surrounding the crashed Acclamator. They arrive just as General Grievous manages to disarm Ki-Adi Mundi, and the Arc Troopers aboard disembark and fire a storm of blaster fire at the General who flees.
Climbing the ceiling with his clawed feet, he strikes killing some of the Clones, and the Arc Trooper commander calls in support, so the LAAT/i swoops down and opens fire with its cannons, giving the Arc Troopers chance to escape with the wounded Jedi.
As they fly off, Grievous approaches the Jedi he has killed, and collects their Lightsabers, as the Arc Trooper commander activates the explosives they'd dropped earlier, blasting a path through the droid army through which the LAAT/i escapes as Grievous watches and tells them they've just delayed the inevitable.
Back on Coruscant, Yoda has a vision of the young Anakin (Episode One, Jake Lloyd version) entering the Dark Side cave along with Qui-Gon Jinn, who tells the boy that he must face his fear.
The Jedi Council meets to discuss the new threat of General Grievous and how he is thinning the number of Jedi, and Obi-Wan suggests that they promote Anakin to Jedi Knight. After some discussion of whether Anakin is the chosen one, and of his impulsive behaviour, the council agrees.
In the crowds of the Coruscant streets, Anakin walks hooded, aware he is being followed, so he lures his cloaked and unknown companion into an alleyway, to ambush them, only to discover that it is Padme Amidala. They kiss, and discuss that while Anakin is unhappy about having to hide their marriage, Amidala convinces him that they may be able to change things after the Clone Wars are over. They spot C-3PO moving through the crowd, also cloaked, but obviously C-3PO, and he shows off his new gold plating, before Anakin is summoned back to the Jedi Temple.
Meeting with Obi-Wan, who admonishes him for being late, Anakin complains that he felt no need to rush to be scolded once again, telling Obi-Wan that he is no Qui-Gon Jinn. But the two make up again, especially when Anakin is informed that he is to be promoted to Jedi Knight.
Anakin enters the Council chambers where the council led by Yoda knights him, cutting off his braid, which he sends to Padme, who in return gifts him R2-D2, and the newly knighted Jedi and his droid board his Eta-2 Actis Starfighter and depart for the Clone Wars.

High Points : Wow this episode gets off to a blistering start, the Arc Troopers get straight into the action and are amazing, jumping out of their Rancor face decorated LAAT/i, and opening fire with a bewildering amount of different weapons, from quad lasers, to gatling guns.
But these first few moments are where all the action is, and then the episode gets into storytelling and stops dead.

Low Points : Now, I've mentioned throughout the series that the extremely short format has meant that there has been almost no storytelling or characterisation. Well, now they've moved to a longer format, that all comes crashing in, and they've really heaped a lot of exposition into this episode.
This episode in many ways just feels like the writers are putting so many pieces into place for Revenge of the Sith. We get Anakins being knighted, C-3PO getting his new plating, R2-D2 being given to Anakin, and Anakin flying an Eta-2 Actis instead of a Delta-7 Aethersprite.
These scenes don't particularly feel like they belong, and just feel like someone checking elements off a list.

And wow, Anakin offers Padme perhaps the most horrible compliment ever uttered, "You look good in the dark", which is surely just the old insult, "You look good with the lights out", and I'm sure I've been told in the past. She should have just slapped him then and there.

And what the hell were the writers and animators thinking when they have C-3PO show off his new gold plating? He coyly drops his robe to stripper music in a fashion which feels totally inappropriate like a dirty joke at a kids party.

And finally I have to question that Anakin complains to Obi-Wan that he's no Qui-Gon. Anakin met Qui-Gon for around a day, 10 years before, and has been brought up by Obi-Wan ever since. While that may have led to Qui-Gon becoming this mythic figure in Anakin's memory, the Jedi that swooped in and saved him from slavery. He surely can't remember what Qui-Gon was actually like, and I have difficulty imagining that Obi-Wan and he haven't had some kind of bonding moments in the decade since.

So what do you really think ? : Well, until it comes to a crashing halt, I love this episode, and even when it's getting on with all the storytelling I don't hate it. Especially as it feels as if it's setting things in motion for this season, getting all that pesky story progression out of the way so they can get on with things.
But we'll see whether that holds out as this season unfolds.

Final Words : So we're into Clone Wars 2003, season 3, and the format is now longer, allowing them to tell more smoothly flowing stories without having to break every 3 minutes. But strangely enough, the first few minutes of this episode where the Arc Troopers rescue the Jedi feels like a seperate story, and I feel as if it had already been written before the format change was communicated to the writers.