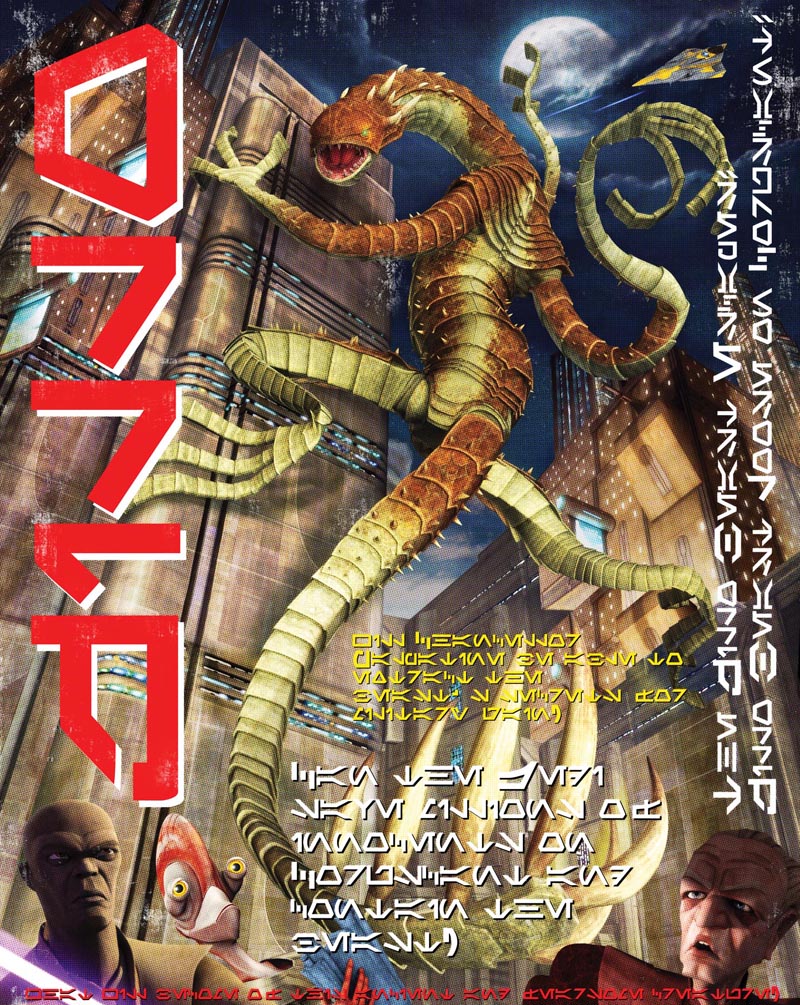 What is it ? : So, the Zillo Beast has been transported back to Coruscant for medical experimentation, to see if it's armour plating can be made into Clone Trooper Armour (although given how resistant it is, starships hulls would have probably been improved using it too). They begin experimenting on it, and it escapes, rampaging across Coruscant, invulnerable to all weapons until they use an extract of Malastare fuel in bombs to take it down.

High Points : The shortness of the summary above perhaps isn't fair, because there's a bunch of other stuff going on in this episode which makes it watchable.

The Zillo beast when restrained is shown to Palpatine, which it either recognises as the man responsible for the orders which are hurting it, or it recognises him as a Sith Lord (according to the writers it's this one). When it escapes, it's after Palpatine (again according to the writers, it's actually trying to protect Coruscant against the evil it senses).
If this is what's going on, then it makes this episode absolutely tragic, as the hero of the story (the Zillo beast) dies heroically trying to defend the galaxy against one of the greatest evils that has ever existed while he is defended by the protectors of the galaxy.

The action in this episode is exceptional, with sequences as Jedi fight the beast from positions on its back as it moves, and as the fuel gas extract is used to poison the beast, the heroes escaping from the expanding cloud. Both excellent and well presented sequences.

Low Points : Palpatine is at his most duplicitous and evil here, scheming to use the Zillo Beast, but twisting his words and the perception of his intentions to try to hide his true reasons. I'm torn between being annoyed at the heroes being so stupid as to not realise he's evil from his words and actions in this episode, and being impressed by his deviousness.

Anakin happily stabs Amidala in the back during a meeting with Palpatine to stay in Palpatines good books, which is totally in character for the idiot ex-slave. I still can't believe that Amidala wants to have a child (or two) with this guy who totally betrays her trust and offers her no support. I'm definitely starting to wonder if Leia and Luke are actually Obi-Wans kids, as with actions like this, Anakin isn't getting any action in the bedroom for some considerable time.

So what do you really think ? : Big action sequences, huge monsters, it's definitely space opera, but it didn't grab me. It was a recreation of King Kong (when from the name I expected Godzilla), but didn't have the heart of that movie.

As a homage to King Kong, it was well done, with the Zillo Beast peering in through the windows of Palpatines office as it scaled the Senate building. But we never had any real scenes of it swatting aircraft out of the sky while standing above the Coruscant skyline, which is the most memorable scenes from King Kong. A bit of a missed opportunity, they should have taken it to the max, lets have a Zillo beast slugging it out with the command tower of a Star Destroyer, Space Opera is supposed to be about over the top spectacle after all.


Final Words : With Palpatine asking for a clone of the Zillo Beast, I guess we're going to get a third part at some time, but I'm wondering where there is to go with it. We've had it as a rampaging beast, we've had it as a noble misunderstood defender, not sure where we go from here.