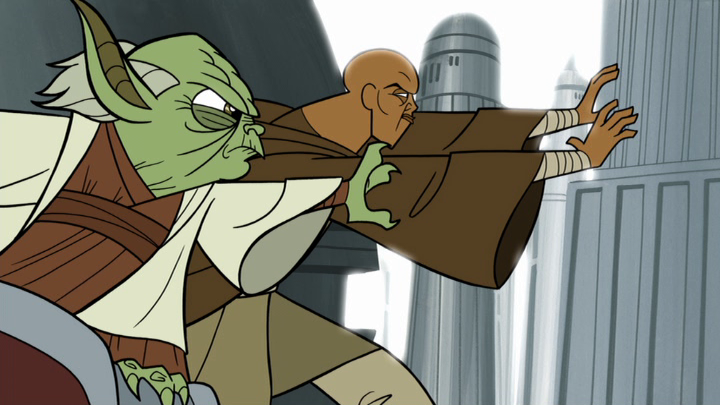 What is it ? : Yoda is meditating in the Jedi Temple on Coruscant when he suddenly senses something happening, undimming the window he sees a massive fleet of Separatist vessels landing forces on the planet. Mace Windu bursts into the chamber annoucing that the Battle of Coruscant has begun.
Saesee Tiin reports that more ships are still coming out of hyperspace, and Mace orders him to take command of the space defence, and the two Jedi board their starfighters.
Meanwhile on Nelvaan, Obi-Wan and Anakin are taking back to the native village and note that it is populated only by women and children, and Obi-Wan translates that Anakin interrupted a boys rite of passage hunt.
Back of Coruscant, Separatist missiles blow a hole in the wall of Padme's residence causing C-3PO to panic, and Captain Typho tries to evacuate Padme, but she instead orders him to help the other residents.
Mace Windu swoops through the streets destroying Tri-Fighters, but his fighter is damaged and he is forced to leap out, but he lands atop a Droid Starfighter, and wrenches out cabling seizing control of the droid and riding it into combat like a chariot, and clone pilots watch in amazement as he destroys the fighters attacking them.
Saesee Tiin flies out into space around Coruscant, where hundreds of Separatist vessels are battling an equally huge number of Republic vessels, he lands on a damaged Republic Star Destroyer, and leads it's Clone Troopers in a spacewalk to seize control of a nearby Separatist vessel and turn it's weapons on other Separatist vessels.
On Nelvaan, the shaman of the village tells the Jedi of the prophecy of the "Ghost Hand", and Obi-Wan realises that Anakin's cybernetic hand fulfils the prophecy, showing the hand to the villagers and asking Anakin to trust him.
Yoda stands before the Separatist army, using the force he hurls Droidekas into the sky using them to destroy Droid Starfighters. He pushes troop carriers back into their landing craft, then crashes the landing craft into each other, before racing off on his Kybuck when he hears that Sector 4 is losing ground.
As part of the ritual on Nelvaan, Anakin is covered with leeches which leave a pattern on his skin, Obi-Wan and he discuss how although Anakin was made a Jedi Knight, he never received a final test, and this will serve as that test, and he sets out on his journey to "follow the frozen tears of the Great Mother".
Yoda and Mace Windu bolster the forces defending the Senate and turn the tide of the battle using their Jedi powers and lightsabers.
In his residence Chancellor Palpatine watches the battle raging, when 3 Jedi, Shaak Ti, Roron Corobb and Foul Moudama, arrive to take him to his secure bunker, but he refuses saying he will not hide from this cowardly attack.
However footsteps are heard on the roof, and the Jedi prepare for an attack, and General Grievous smashes in through the window.

High Points : Again a very montage style of episode, with lots of flashes between different areas of fighting, but this time it's more concentrated on just the battle of Coruscant and the events on Nelvaan, even if it does switch between quite a varied cast of characters.

The two stand out scenes for me were definitely Mace riding the droid like a chariot, which is a bit silly, but very cool, and Yoda using the force to hurl Droid forces around destroying them. Given how many Yoda himself destroys, (we see him destroy 4 C-9979 Landing Craft, each of which carries 11 MTT's, which carry 112 Battle Droids, so at least 5000 Battle Droids just in a few seconds), we see why the Jedi are used so heavily in the Clone Wars, they're absolutely deadly.

Low Points : While the cutting between different scenes to tell the story works, the change of pace everytime we return to Nelvaan is a bit of a wrench. So we get battles and action, starfighters screaming through the sky, then we get Obi-Wan and Anakin sitting around a campfire listening to a story, then we're back to explosions and thousands of starships and battle droids. It feels like two episodes spliced together.

I'm also a little annoyed by this ritual that Anakin is going through. When Obi-Wan called for Anakin to be made a Jedi Knight, he claimed that Anakin's experiences through the Clone Wars served as the trials a Jedi would normally undergo. However now he tells Anakin that he skipped the trials, and this will serve instead. Could he make up his mind please.

So what do you really think ? : A pretty solid episode with a couple of stand out scenes. They're really packing in a lot into these fairly short episodes, even if the storytelling still feels like a bunch of the shorter 3 minute episodes grafted together into a longer format, instead of a cohesive single episode.

Final Words : Well, 2 more episodes of Clone Wars 2003 to go, and we're witnessing the kidnapping of Chancellor Palpatine which leads into the start of Revenge of the Sith, something we're likely to see again soon in the new Clone Wars episodes, it'll be interesting to see how the 2 different series handle the same events.