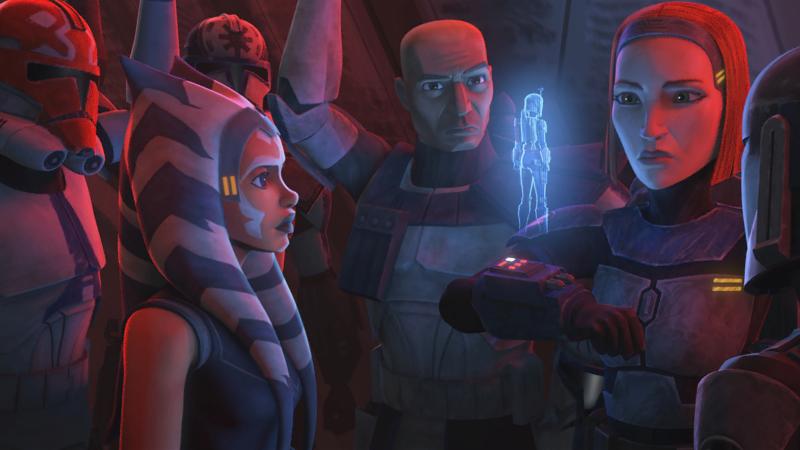 What is it ? : We start up with a different intro sequence than normal, with a red version of the Clone Wars logo, and a much longer intro narration, where the narrator tells us that the Separatists have launched a wave of attacks putting pressure on the Republic and the Jedi order has been forced to send it's Generals far from the core worlds to bolster their forces.
It lists where some of the Jedi have been sent, which are recognisable as the places where those Jedi met their deaths during Order 66, so we're aware that we're really close to the events of Revenge of the Sith and the fall of the Jedi Order.
On the world of Yerbana Obi-Wan Kenobi and Commander Cody are under pressure fighting a superior droid force and are hiding in cover from the enemy attacks, when Anakin joins them, having successfully won his battle, he offers to help as he stands in full view of the droids as their shots all miss him.
He strides forward and offers his surrender to the droids, who cease fire and call for their tactical droid to make a decision. He arrives and tells them it's obviously a trick and they should open fire. Anakin pulls the tactical droid towards him and slices it's head off, while Rex and his forces arrive via jetpack and turn the tide of the battle.
Afterwards Obi-Wan and Anakin are told a message has arrived for him from Fulcrum, which Anakin thinks is Saw Gerrera, and that the battle of Onderon must need support, so they return to their Star Destroyer only to discover the message is from Ahsoka.
Ahsoka tells them that she knows where Maul is and they can capture him if they move quickly. She arrives and tells Obi-Wan and Anakin that if they help Bo-Katan attack Mandalore and take it back from Maul they can capture him, quickly telling them that she obtained data from the Pykes on Oba Diah, but Obi-Wan points out that Mandalore has treaties with the Republic which would be broken if they attack and it will mean war.
Bo-Katan asks what is one more war, and Anakin responds they've not finished yet with their first one.
After the meeting Anakin takes Ahsoka to Rex and his men who have repainted their helmets to match her facial patterns to honour her, and Anakin returns her lightsabers.
Klaxons sound and they rush to the landing bay, and Obi-Wan tells them that a massive attack has happened at Coruscant, and they've been ordered to help defend the planet. Ahsoka asks if they're just going to abandon Bo-Katan and her people, and Obi-Wan says that the people of Coruscant need them more urgently.
But Ahsoka points out that no, the politicians need them, and that's why she left the order because they've forgotten the people. Anakin suggests sending Rex and his men who won't be needed in a space battle under Ahsoka's command, but Obi-Wan points out she isn't a Jedi or member of the Republic any more, so Anakin suggests instead, promoting Rex to Commander and putting the force under his command with Ahsoka as a special advisor, which Obi-Wan agrees to, before advising Ahsoka to capture Maul rather than killing him, as he tends to not stay dead.
They arrive at Mandalore, and Bo-Katan communicates with Prime Minister Almec that they're here for Maul and his time is over, and they decend into the atmosphere in LAAT/i's. Missiles from the ground destroy some of the Republic vessels, and Jet Pack wearing Mandalorians attack, only for Rex's forces to exit their ships and join the battle. Ahsoka tells Rex she'll beat him to the ground and exits the ship without a Jet pack.
She leaps from vessel to vessel engaging Mandalorians, ending up on one burning LAAT/i, where she cuts the pilot from the cockpit allowing him to eject to safety, and she rides the burning ship down to the surface where she meets up with Rex again, telling him she beat him and he replies that nothing changes.
The Republic forces defeat the Mandalorian forces they meet and make rapid progress into the city, with Bo-Katan leading the attack on the Prime Ministers position, and Ahsoka leading the attack towards Mauls position in the undercity where he is being guarded by Gar Saxon.
Bo-Katan takes the throne room, fighting Almec, but he tells her that Maul planned all this to cause Mandalore to be at war with the Republic, as the Mandalorian people will see this as an invasion, but he also tells her that Maul planned for her to bring the Jedi, but she has brought the wrong one straight into his trap, and Bo-Katan tries to signal Ahsoka but the transmission is blocked.
Meanwhile in the undercity, Ahsoka gets seperated from her forces, and when she finds them they've been killed by unseen forces, the commander, Vaughn apologises to her for his failure before he dies.
Mandalorians emerge from side tunnels surrounding her, and she pulls her Lightsabers when Maul joins them saying he expected Kenobi and asking her what she is doing here.

High Points : An episode which builds well, as the first scenes on Yerbana really annoyed me for reasons I'll go into below, but after that it does everything that I could wish for from an episode. We've got some good scenes between Ahsoka, Anakin and Obi-Wan, where we can see that while Obi-Wan is kind of in the wrong, that he has no other choices. That the rules of the Jedi Order and the Republic have forced him into a position where he cannot do what he wants and what he knows is right, because of his obligations.
Obi-Wan wants nothing more than to get Maul, the man who killed the woman he loved, but must return to Coruscant. He'd love to send Ahsoka and the Clones to undo Mauls handiwork, but he can't put Ahsoka in charge. We see how well Palpatine has corrupted the Jedi order, forcing them away from their ideals into military bureaucrats. And some of my problems with the last few episodes where the Martez sisters had issues with the Jedi which I felt were unfair, have now been tied into this plot and force me to take back some of my criticisms of them.

And we get the Siege of Mandalore, which actually only seems to last about 10 minutes, as the Republic forces definitely seem to be in a position of power having taken the surface and the throne room. But what a 10 minutes it is, with Clones and Mandalorians battling on their jet packs, while Ashoka force jumps from vessel to vessel, it's great action and wonderful to behold with the animation at an all time high point for the series.

I was also super impressed with all of the name drops being done during the episode, Shaak-Ti being mentioned as being ordered to defend Palpatine (and therefore taking part in the events shown in the 2003 Clone Wars finale, which I'm just reviewing for the site at the moment as well), Gar Saxon defending Maul (when we know he ends up as the Imperial governor of Mandalore during the events of the Rebels series (although I now wonder how he goes from fighting the Republic, to being an Imperial commander)).
We get Ursa Wren making an appearance (the mother of Sabine Wren), a Mandalorian called Rook Kast (some relation to Jodo Kast perhaps?). And probably more that I missed, it really makes this take part in a cohesive and unified universe without being overloaded with a need for knowing all the lore since these characters and appearances make total sense even if you don't know the context.

Low Points : Well, I mentioned problems with the scenes on Verbana at the beginning, Anakin stands in full view of the Droids, not having to dodge or parry the incoming fire with his lightsaber. Which is entirely possible, if unlikely. But later, after the droids are ordered to all target Anakin when he is offering to surrender, then ordered to fire by the Tactical droid, he still isn't hit, not diving for cover, not even having to flinch.
Are the droids really that bad at shooting that the entire military force that had Obi-Wan and Cody hunkered down in cover can't hit Anakin when he's standing far closer.
It's just an opportunity to show cocky Anakin in the right once again, but I really just wanted him to be shot in the face at that moment. I know he's going to be the villain in a matter of days and murder kids in cold blood, but we're supposed to feel his fall from grace rather than just shrug and say "well, I always hated that guy!".

I also kind of wanted either Ahsoka or Bo-Katan to answer Almec or Maul when they are told that Maul wanted Obi-Wan to come not Ahsoka, that Maul's just not that important. While he may think of himself as Obi-Wan's nemesis, on the galactic scale of things, nowadays he's just a criminal gang leader, with around the same status and influence of a Hutt crimelord.

So what do you really think ? : As I said above, after a bit of a weak start, things really get moving. The pieces are all being put into place for the events of Revenge of the Sith, with Anakin and Obi-Wan taking part in the battle of Coruscant, Shaak-Ti defending Palpatine, the other Jedi Masters on the outer worlds, and Ahsoka and Rex, two people we know survive Order 66, on Mandalore.
I'm definitely thinking that we're going to get Maul's storyline wrapped up within an episode or two, and then deal with the fallout of Revenge of the Sith on these characters.

Final Words : So, next week we've got the fantastically names "The Phantom Apprentice", which I'm desperately hoping refers to Maul rather than introducing any new characters, and tells us how he's gotten here, and his new relationship with Darth Sidious. And they've released the names of the final two episodes "Shattered", which probably refers to the Jedi Order, and "Victory and Death", which is ominous, but perhaps means that Rex and Ahsoka have to fake their deaths?
But we shall see how things wrap up, with the final episode set to be released on May the Fourth, an excellent present for us all to receive on Star Wars day.