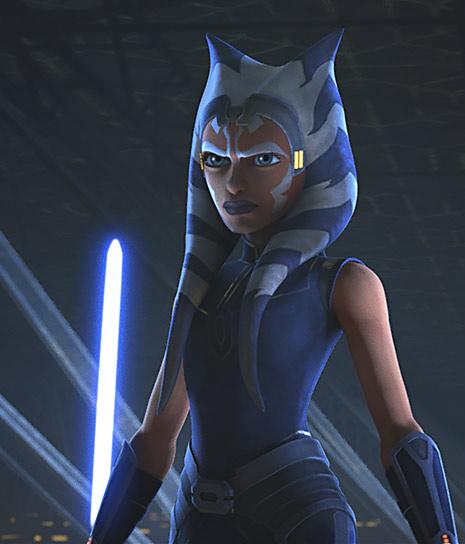 What is it ? : Ahsoka is surrounded by Mandalorians and confronted by Darth Maul, who ponders why Obi-Wan sent Ahsoka instead of coming himself with Anakin, but Ahsoka tells him they had more important duties and hits a signaller to summon Rex.
Maul reveals that he thinks that events are in motion and the Jedi order and Republic are about to fall, and when Ahsoka questions him about what will replace them he mentions Darth Sidious.
Rex arrives with Clone Troopers, who take out some of the Mandalorians, and Maul distracts Ahsoka by using the force to fling Rex into her, while he and the rest of the Mandalorians flee.
Ahsoka returns to the throne room, and contacts Obi-Wan Kenobi, revealing the name Darth Sidious to him, and Obi-Wan tells her he learnt of the name from Count Dooku, but Dooku is now dead at the hands of Anakin. Obi-Wan reveals that Anakin has been ordered by the Jedi Council to spy on Palpatine, and Ahsoka realises that Anakin won't be happy about being ordered to act against his mentor and friend. Obi-Wan tells her that he cannot come to Mandalore to help as he has been ordered to deal with General Grievous on Utapau, and asks her to speak to Anakin about his mission, but she tells him that she's not the right person to do that due to the issues she herself has with the Jedi Council.
Rex tells Ahsoka there's been another attack, and when they respond a Clone Trooper named Sterling tells her that Maul has taken Jesse an Arc Trooper to interrogate about her. They go to the Mandalorian prison where Prime Minister Almec is being held, and he tells them that Maul is actually interested in someone called Skywalker. But before he can tell them more he is assassinated by Gar Saxon, who Bo-Katan chases but loses him when he damages her jetpack and flies off.
In his lair, Maul orders the criminal underworld bosses he controls, including Marg Krim, Ziton Moj, and Dryden Vos, to go into hiding, saying the galaxy will soon be remade and they must survive to seize what power they can. He thanks Gar Saxon and Rook Kast for rescuing him from Sidious's prison, telling them that he will give them a glorious battle rather than the ignominy of hiding.
Bo-Katan, Ahsoka and Rex watch the population of the city being shepherded by Clone Troopers into safety, and Bo-Katan warns that the people of Mandalore will not put up with this for long, and Rex agrees saying his forces shouldn't be used for policing.
They turn to enter the throne room once more, only to discover Maul sitting on the throne with Jesse at his feet, he returns Jesse to them, and Rex leaves taking his fellow clone to safety. And as fighting breaks out across the city, Bo-Katan rushes away, leaving Ahsoka and Maul alone.
Ahsoka tells him she is here to bring him to justice, which he responds by telling her that justice is determined by the current power base, which is about to fall. Maul tries to convince Ahsoka to join him, telling her that the Jedi cannot stop Sidious, and that they have both been tools for greater powers, and together they can possibly stop Sidious.
She agrees to join him if he will answer one question, and he tells her she need just ask. So she asks him why he is interested in Skywalker.
Maul tells her that Anakin is key in bringing down the Sith, and that he has long been groomed for his role as Sidious's apprentice, and that he had hoped to lure him here to kill him and deny the sith lord his prize.
Ahsoka calls him a liar, and ignites her lightsabers, and Maul ignites his, telling her that the apprentice needs one more lesson.
Their battle takes them up into the support structures for the dome over the Mandalorian city, and below them the battle rages, with the Republic forces emerging victorious, and Rex capturing Gar Saxon.
On the supporting beams, Ahsoka and Maul battle, with Maul disarming Ahsoka, leaving her on the end of a broken beam, where she is spotted by Rex who boards a LAAT/i to help.
He gives her one last chance to join him, but she grabs his weapon and turns the tables on him causing him to fall, but she grabs him with the force and suspends him until Rex and the other clone troopers can capture and bind him. . .

High Points : WOW.
I've said that a few times in my reviews, but the lightsaber fight between Maul and Ahsoka is spectacular. The animation style over the years has improved and improved, and with motion capture work done on Ray Park himself, it now looks as perfect as the movies themselves. While it may not have the poetic perfection of the final Maul vs Obi-Wan fight in Star Wars Rebels, but it is absolutely amazing to behold and I could scarcely believe I was watching an anamated series.

But that is only the breathtaking finale of the episode, there's so much else in here, especially as we are shown we're into Revenge of the Sith territory here, with Dooku already defeated and the events of Order 66 and the fall of the Jedi Order, declaration of the Empire only days or even hours away.
And Maul's knowledge of these events is fascinating, as he's basically scrambling around to avoid Sidious's goals coming to fruition, ordering his criminal syndicate into hiding to survive the events that he knows will reshape the entire galaxy.

Low Points : There's not a lot I'd criticise in this episode, but I have to mention how clumsy the connections between this story, the last Maul story (The Lawless) and Solo: A Star Wars Story.
We last saw Maul as a prisoner of Sidious, and we next see him in charge of the Crimson Dawn syndicate, but we were never told how those two things connected. But this episode makes the token effort of Maul thanking Gar Saxon and Rook Cast for rescuing him, and Dryden Vos is among the syndicate leaders who he issues the instructions to hide.
And while I'm glad of there being some effort to connect the storyline together, as it's annoyed me ever since I saw Solo: A Star Wars Story, but this does feel like very much of a token effort. Isn't the rescue of Darth Maul from his imprisonment at the hands of Darth Sidious himself, by Mandalorians including the future Imperial governor of Mandalore Gar Saxon, worth seeing?
I really feel that during the last 4 episode arc, where we really did have a lot of room for tightening up the storyline (an entire episode where they escape from jail, only to be captured and end up back in the same cell by the end of the episode could probably have been somewhat cut down), we really could have had the story running concurrently of Maul being rescued by Mandalorians.
The two stories running side by side, as Bo-Katan brings Ahsoka into the conflict on Mandalore as we head for the climactic end of the Clone Wars, feels like it could have made a lot of dramatic sense.

So what do you really think ? : Without the battle between Maul and Ahsoka, this would have been a pretty good episode of Clone Wars, but with that fight, it is absolutely astounding to behold. In my opinion it is one of the finest episodes that Clone Wars has done.

Final Words : This episode being so good makes me worried, as with two episodes to go, I wonder how this can be topped. It seems that all of the highs of the remaining story are now emotional rather than action based. As the other major players in the galaxy are otherwise occupied by the events of Revenge of the Sith, and we know that Maul, Ahsoka, Bo-Katan, Gar Saxon, and Rex all survive and are seen in Star Wars Rebels. There seems to be little scope for much action beyond Ahsoka and Rex having to flee into hiding during the dark times, and Maul escaping from captivity once more. . . .
But we shall see next episode how things progress.