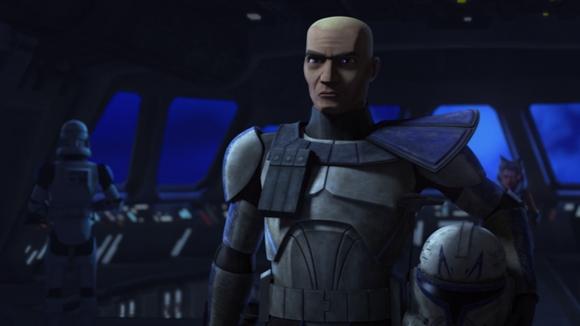 What is it ? : Ahsoka and Rex are preparing to leave Mandalore under the control of Bo-Katan with Maul imprisoned in a Mandalorian chamber created to hold Jedi. They shuttle up to their Star Destroyer which makes the jump to hyperspace, Maul is put into a holding cell still in the Mandalorian Chamber, while Ahsoka and Rex have a conversation on the bridge.
Ahsoka talks about how the Jedi are trained to be guardians of peace, but her whole life she's been fighting in a war, and Rex responds that without this war he and the other clones would never have been created. And Ahsoka tells him that one good thing came of the war after all.
They are summoned to a message from Coruscant, but Ahsoka holds back because she senses something through the Force, and we hear the voices of Mace Windu, Anakin Skywalker and Chancellor Palpatine during their climactic battle in Revenge of the Sith.
Ahsoka rushes to catch up to Rex, and enters the briefing chamber just as Darth Sidious issues Order 66,
Rex struggles against his programming, telling Ahsoka to "find Fives", before he pulls his blasters on her, just as the rest of the Clones turn on her as well. She deflects the blaster bolts, cutting her escape through the ceiling, and Rex orders the escape pods destroyed and extra guards put on the launch bays.
Ahsoka heads down to the holding cells, where she finds a pair of Clone Troopers about to execute Maul while he is restrained, and she knocks them unconscious.
She frees Maul, who proposes an alliance, and is impressed as he hears the details of Sidious's plan, using the Clone Army against the Jedi. Ahsoka refuses the alliance, telling Maul that she just needs him to cause a distraction, telling him to cause chaos.
As Maul rampages through the ship, using the force to wield pieces of deck plating to cuts Clones in half and deflect their fire, Ahsoka looks up the records on Fives, and finds the information on the chips in the Clones heads, including a recording from Rex warning that he thinks the chips have an ulterior purpose.
She activates a bunch of Astromechs, and uses them to cut Rex off from the other Clones and stun him while she distracts him.
Taking him to a medical bay, she and the droids operate on him to remove the chip, while Clone Troopers attempt to cut their way into the chamber. As the fighting rages, we see Rex awaken and pull his blasters, pointing them towards Ahsoka as she stands between him and the door. Only for him to open fire and take out some of his brother Clones as the Droids seal the door once more, before apologising to her for his actions.
She asks about the chips, and he tells her that they're in all of the Clones and that the Great Army of the Republic has now turned on the Jedi.
They turn to the door as the Clones on the other side begin cutting their way through.

High Points : Another absolutely amazing episode, the moment is upon us and we see Order 66 issued and the Clones turn on the Jedi, and although we've been waiting for it for the last few weeks, it happens so suddenly.

So Ahsoka is hunted by people who only moments before were saluting her, and as they hunt and try to kill her, they're literally wearing her face markings painted onto their helmets to honour her.

There's so much good about this episode, it brings together the storyline about Fives and his malfunctioning chip, right into the action as Order 66 is issued, with it revealing to Ahsoka what has happened.

And I absolutely loved the way they tied this into Revenge of the Sith, with the Jedi Council we witness early in the episode being part of the meeting we witnessed in the movie, tying things together wonderfully, along with some nice homage to Rogue One with Ahsoka concentrating during the surgery on Rex by chanting "I'm one with the Force, and the Force is with me,"

Also darn impressive is the brutality of Maul as he "causes chaos", using sections of deck plating to decapitate Clone Troopers, putting one of their arms through a closing blast door, so the limb is severed. He stalks through the ship with a determination and menace of a movie serial killer. The scenes are reminiscent of Vader's at the end of Rogue One, but extended and more gruesome (without showing any gore of course, it's a Disney kids show).

Finally, the music was astoundingly good, with a very Vangelis, Blade Runner type feeling to it, which just helps build tension in the early part of the episode.

Low Points : Okay, Continuity.
Ignoring the fact that Rex says in Rebels that his chip was removed and he never turned on Ahsoka, but this story has played out in the novel "Ahsoka" in a different manner, where she's actually still on Mandalore when it all happens. I thought that everything published by Disney was supposed to be Canon.
Also on the subject of continuity, we've had at least one story in the comics where a Jedi uses Order 66 against an Inquisitor, by getting them to reveal that they were once a Jedi and still consider themself to be, so their Clone Trooper escort turn on them. But the water is very much muddied here, because Ahsoka isn't a Jedi, yet the Clones turn on her. And stranger yet, they also try to eliminate Maul, who most definitely isn't a Jedi and never has been.
Yet we see them escorting Anakin into the Jedi Temple during Revenge of the Sith, so they seem to be capable of making some kind of decisions.

And I know we're supposed to be seeing the events from a different angle, and Ahsoka isn't happy with the Jedi order at the moment, but did they really have to make Mace Windu such an a-hole to Ahsoka. If this is how he'd always been portrayed, I think we'd have been cheering Anakin and Palpatine on. I realise that they're making the message that much of this is actually the Jedi's fault, and appreciate that, but let us not forget, that Anakin is off murdering children at this moment. So while the Jedi might have some hand in treating him and Ahsoka badly and driving him away, nothing they do is justification for murdering innocent children, and ones that know and trust Anakin.

Also, I'm a little confused that Rex calls Palpatine "Lord Sidious" when he receives Order 66. Is that encoded into the chip? So Sidious's secret would have been revealed if only someone had decoded one of the many millions chips in the Clone Troopers heads?

So what do you really think ? : A brilliant episode, and one which passes all too quickly.
I'd have prefered for Rex and Ahsoka to have escaped the Star Destroyer by the end of the episode, and have the finale all about their realisation of the scale of the disaster which has just befallen the galaxy and their need to go into hiding.
But I really can't criticise what they've done.

Final Words : Well, one episode to go, and it's out on May the 4th, so only 2 days from now, and I can't wait to see how they finish this off. Because while we know where everyone ends up, it'll be interesting to see how they got there.