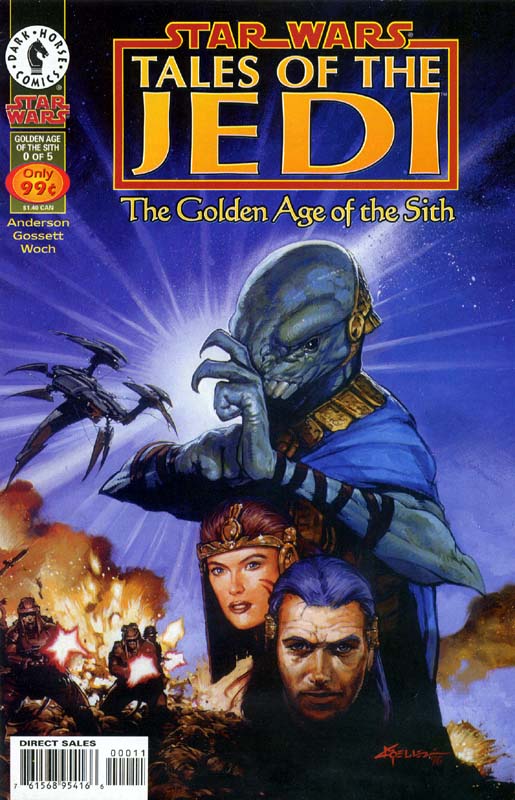 The Golden Age of the Sith 0: Conquest and Unification

What is it ? : 5000 Years before the Battle of Yavin, we start with the Jedi Historian Odan Urr, telling the story of the Sith, how they were formed from a schizm in the Jedi order, with the losers fleeing and meeting up with the Sith species who they ruled over like gods forming a new golden age of evil.
Odan Urr tells this tale to his master, a many tentacled being inside a crystal container of liquid, named Master Ooroo. But Ooroo tells him that Jedi must act as well as learn and study, sending him off to the war in the Koros system where the Empress Teta has unified 6 of the 7 worlds, but the struggle is going badly on the last world.
Meanwhile on Cinnagar at the dock of Aarrba the Hutt, Hok and Timar Daragon are concluding a deal for the repairs that have been done to their ship, that the Hutt will let the take the ship in exchange for part of the profit on their next cargo run, delivering much needed relief supplies to the soldiers on Kirrek, the warring world in the Koros system.
The couples children, Dav and Jori offer to take the family's other ship, the Starbreaker 12 along with them, but Aarrba claims the ship as collateral until his profits are returned, so the children must remain behind with Aarrba as they fly off on their delivery mission.
Odan Orr arrives at the palace of the Empress Teta also on Cinnagar, and is met by Memit Nadil, the Empress's Jedi Advisor, who takes him to meet the Empress who is busy preparing the assault on the last group of rebels on KIrrek, a battle which will cost many lives. However Odan Urr suggests using a technique he has studies called Jedi Battle Meditation, and Memit Nadil offers to study the technique and help out.
The Empress's fleet arrives at Kirrek, and the two Jedi concentrate on their Battle Meditation, with Odan Urr using his power against the Rebels, breaking their morale and making them feel everything is hopeless, causing their ranks to break as many flee the battle. Meanwhile Memit Nadil concentrates his powers on the attackers, boosting their morale and making them fight harder and with less fear.
However, even though they feel as if everything is hopeless, some of the more desperate Rebels decide that even if they are to die, they're going to take down as many enemies as possible.
Into the middle of this fly the Daragon's, and the Rebels target their unarmed transport ship, blowing it out of the sky and killing all aboard before their positions are overrun and the Rebellion defeated.
Even though he is congratulated for turning the tide of the battle, Odan Urr is shocked by the loss of life, seeing his success as a failure, especially for the innocents trying to deliver supplies, so he declares that he never wants to see battle again.
Back on Cinnagar, Aarrba the Hutt receives the news of the loss of the Daragon's, and informs Dav and Jori, giving them the Starbreaker 12 as their parents paid for the repairs in blood.

High Points : A solid introduction to the story and the era, so this issue has a lot of heavy lifting to do, with both the characters and the setting being introduced. And while a lot of things are very familiar, Jedi wielding Lightsabers, Hutts, etc, we're also seeing a lot of new things, with the starships especially looking very different to those of the movies, with a more organic and primitive look to them.

But the story does manage to hold up fairly well, giving us some action and tying together various elements that will come later, from the Daragon's relationship with Aarrba the Hutt, the united nature of the Koros system (seemingly fairly unusual in this time period), Odan Urr and his pacifist and studious nature (perhaps the first Jedi Librarian we've seen?).

I have to give special mention to Aarrba the Hutt, who is perhaps the most interesting character shown in this issue, with a subtle undercurrent of being a generous and just downright decent and nice Hutt. He has made a deal to get the Daragon's back in business, be offering to take a cut of their next cargo run, so offering credit to them when they need it. But also gives away the ship he's kept as collateral to give the Daragon's children a business and life. But the most subtle moment is when he asks for the ship as Collateral, which might at first glance seem like a typical Hutt business move to ensure he gets paid, but on further examination it's fairly obvious that he's actually trying to keep Gav and Jori out of danger by denying them the ship they're about to take into the same hostile warzone as their parents. This is a genial, generous and friendly Hutt, which I can't think of having seen anywhere else.

Low Points : It's an issue 0, so pretty brief so not a lot to criticise here, although the first page managed to annoy me with the timeline which not only makes mention of the Droids Series, but also mis-spells the "of" when it mentions "Splinter if the Minds Eye".
The issue is a little rushed, and Odar Urr's tale to his master at the beginning is a bit of an info dump, and one which probably contradicts canon now, with the Sith originally being a species which is dominated by Dark Jedi fleeing a Schism in the Jedi order, rather than a seperate Sith Order, this making the Sith just more fallen Jedi.

So what do you really think ? : A solid beginning to this series, and although it wasn't the first published, it does a good job of taking us back even further than the Ulic Quel Droma stories which had preceded it and filling us in on the time period we're visiting.

Final Words : Probably the shortest issue, and therefore the easiest to review, of the Tales of the Jedi, but we're off on our journey through this period, which remains a fan favourite having led to the two Knights of the Old Republic games as well as the Old Republic MMORPG, and constant demands by fans for a movie to be released detailing this time period in the Star Wars universe.