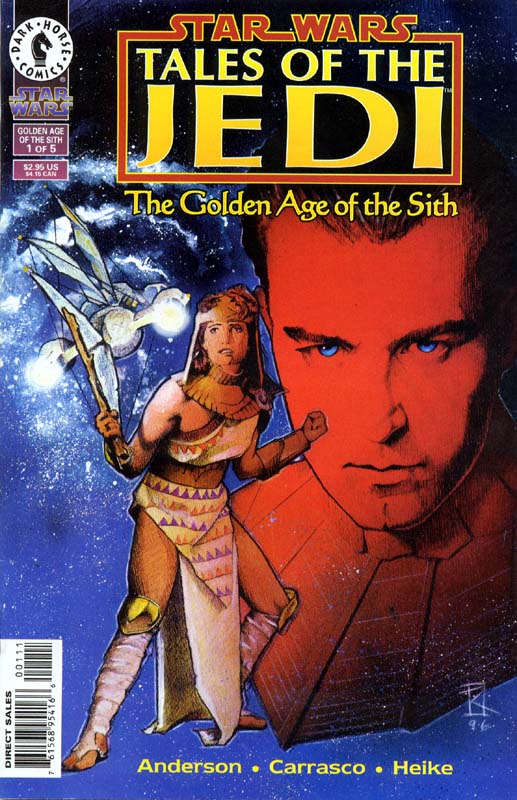 The Golden Age of the Sith 1: Into the Unknown

What is it ? : Following on some time (probably years) after the last issue, Jori and Gav Daragon have become Hyperspace Explorers using the ship left to them by their parents, the Starbreaker 12. They make random jumps through Hyperspace, plotting the routes and selling them to the Navigators Guild if they are faster and safer than the routes already known.
They leave Cinnagar, and banter with flight control as it is widely known that the pair are penniless, and in debt, and make a jump to Hyperspace hoping to be lucky and make their fortune, emerging having found a far faster route than they've seen before. However they emerge in a stellar cluster which damages their ship, and Jori remarks that while the route is faster it's too dangerous and no one will pay for it, and they limp back to Cinnagar in their damaged ship.
Landing at Aarrba the Hutts repair yard, they beg him to repair the ship, but he's aware they have nothing of worth left, having even sold their home on Cinnagar. He agrees to mend their ship, but tells them he won't let them take it until he's paid in full.
But Gav learns that a route they plotted has been certified by the Navigators Guild and that they will be due cuts of any profits made using that route, but Jori points out that it's been given such a high risk factor, that no one will use it.
Meanwhile, Ssk Kahorr a merchant has acquired the Daragon's Hyperspace route, and sees it as being one which will earn him massive profits, dismissing the concerns of a subordinate who warns of the risk factor, telling them that the Navigators Guild has such high safety standards that only a coward would fear such risks.
We then see his automated drone barge using the route and emerging too close to a star, launching a beacon warning of the danger back to Kahorr as the vessel explodes.
Kahorr receives the news, and wants revenge for his loss on whoever plotted the route.
He first kills the Bureaucrat at the Navigators Guild who authorised the route and gets Gav and Jori's names, sending assassins to kill them as soon as he discovers they have nothing worth taking to compensate him for the loss of his ship.
Jori is in the city watching Empress Teta meeting the people and showing off the support she has from the Jedi, and Jori feels regret for how her life has turned out, looking at the Empress in her splendor, while Jori is wearing rags without anywhere to call home except their ship. She and Gav even had the chance to train as Jedi having been assessed as high in force potential, but turned it down for the chance at riches and not having the disposition or patience for the training.
Gav is with Aarrba, promising him to pay for the repairs from the profits from their route, which Aarrba dismisses as nothing until he can actually see the money, but on leaving the repair yard Gav and meeting up with his sister, they are ambushed by the Assassins and cornered in a deadend street. But Odan-Urr and Memit Nadill come to their rescue, having sensed the assassins, Odan-Urr kills one because of his species natural predatory nature, and is ashamed when Memit tells him there was another way. The two Jedi warn the Daragons that the city isn't safe for them, and they should leave.
Gav and Jori head back to Aarrba's, and steal their ship back, launching back to space, but coming under attack by defence fighters and warned to land again as they have launched without permission and without paying Aarrba, so the two spin the dials on their navicomputer and make a random hyperspace jump hoping their luck will deliver this time. . . .

High Points : While the last issue had a lot of world building to do, and did it while delivering a few interesting scenes, this issue has a lot of story building to do and does feel a bit bogged down by it all.

But it looks amazing, with this time period having a very unique look in the Star Wars universe, with a certain ancient look to the clothing and buildings, while retaining the high technology edge of Star Wars. The closest I think I can describe it as, is if ancient Egypt or Rome suddenly had starships and droids. There's lots of weathered stone buildings, and everyone is wearing robes, ornate decorative jewellery, sandals and furs.
And it really works, it's instantly obvious this isn't the same time period as the movies, and by using elements we instantly recognise as being ancient, while including elements from Star Wars (lightsabers for example), it informs us at a glance that this is ancient Star Wars.

Low Points : Everything feels a bit like set up. Gav and Jori make random hyperspace jumps for a living, so when they become in danger, they make a random hyperspace jump. They're penniless, so are disillusioned with their society. Odan-Orr is a predator by nature, so struggles with the pacifistic nature of being a Jedi.
I honestly can't remember how many of these are used later in the story, but they all feel clumsily dropped into the story to lay down the base for later story elements.

And although it's a recurring element in Star Wars, having been used as recently as in Resistance, but I always feel it's a little odd with people claiming to be poor and destitute in the Star Wars universe, while owning a Starship. For example, Jori feels bad about wearing rags, but she's a part owner of 10's of thousands of credits worth of starship. That's not poor and destitute, that's just not having liquid assets, the way billionaires can go bankrupt while owning massive corporations and buildings. They can't pay their debts without selling something they own, and definitely aren't on the same level as someone on the streets who truly has nothing.
I just feel as if the Star Wars version of poor, is still pretty affluent.

So what do you really think ? : A solid issue of story building, but one which doesn't feel as if much happens, Gav and Jori owe money and go on the run basically sums up the entire plot of the issue. But the issue is more than that, as many characters are being set up for later.

Final Words : I really like this version of the era, the idea of people making random Hyperspace jumps to map out the galaxy is a compelling one which gives me so many ideas for adventures and games. A campaign where the players are Hyperspace explorers, and basically can turn up anywhere, so can discover strange world where danger lurks, and mysteries await, while other times can reach civilised worlds and be caught up in local intrigue, seems like a solid set up to me, and one I'd kind of like to run.