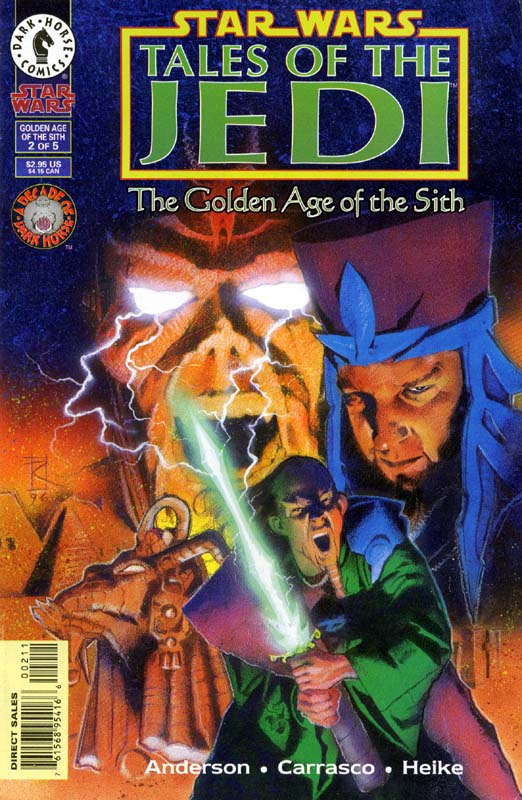 The Golden Age of the Sith 2: Funeral for a Dark Lord

What is it ? : On the world of Korriban, in the valley of the Dark Lords, Ludo Kressh is heading a funeral procession for the deceased Dark Lord of the Sith, Marka Ragnos. He follows all of the traditions of the Sith as they light fires and lay the fallen Dark Lord to rest in a casket made from precious metals and jewels, honouring the man in the hopes of becoming the next Dark Lord of the Sith.
Meanwhile in Hyperspace, Jori and Gav Daragon are in the Starbreaker 12, which is barely holding together with the massive random jump they've across the Galaxy, but they emerge above a dark world, hoping to find riches or trade so they can pay their debts.
At the funeral, another ship arrives, but Kressh refuses to wait for it's occupant and attempting to bar him from the funeral, but Naga Sadow refuses command from any Sith, Lord or Slave, and the two men begin to argue, Kressh who honours the traditions that Ragnos set throughout his long reign, and Sadow who feels that the Sith have become stagnant, and are wasting the potential passed down to them by their ancestors, and Kressh feels that Sadow's way of thinking endangers the Sith.
They begin to fight, using Sith Swords and the Force, but the spirit of Marka Ragnos manifests, stopping them before either can be too badly harmed, telling them the history of the Sith people, as their ancestors were part of a great Schism in the Jedi Order between the Dark Side and the Light. They were defeated and fled across the galaxy to this area of planets, meeting the Sith people who worshiped them like gods. They conquered an Empire here, and over the generations they interbred with the Sith, but some have retained the connection to the force of their ancestors.
He warns that this is a period of danger for the Sith Empire, and they must be sure not to fight the wrong fights if they are to survive. Kressh hears wisdom in what the Dark Lord has said, but Sadow objects to the interference, saying that the pronouncement of a spirit is not enough for him to forget who is his enemy.
Back on Cinnagar, the Jedi Odan-Urr senses the events unfolding on Korriban, and heads down to the throne room to tell Empress Teta and the other Jedi, Memit Nadill, who he finds are listening to Aarrba the Hutt who is reporting Jori and Gav Daragon for stealing their ship back without payment and for damage to his property when they broke in and fled with their vessel. Odan-Urr warns the pair afterwards, saying that while the evil Jedi of the past were banished they still present a danger to the Republic, and the Empress Teta promises to pass this information on when she visits Coruscant in a few days.
Gav and Jori Daragon spot the ships landed in the Valley of the Dark Lords, and see the tombs encrusted with precious metals and jewels, and Gav thinks they will profit greatly from this journey, and land, pronouncing to the gathered Sith that they come from the Republic in peace, but they are grabbed by the guards.
Sadow and Kressh begin arguing once more, with Kressh warning that the pair may be precursors to an invasion by the Republic so should be killed, and Sadow saying that they should be taken prisoner as their knowledge may open up new fields for the Sith to Conquer . . .

High Points : A bit of an info dump here, with the only action being a fight between Ludo Kressh and Naga Sadow which gets ended relatively quickly by the spirit of Marka Ragnos.

But what an info dump it is, we get a flash back to the schism in the Jedi, forcing the Dark Jedi to flee across the galaxy, and we find out the Sith were once just a species, and the Dark Jedi have interbred and turned the species into one which conquers and follows the Dark Side.
We are told more of the ways of the Sith, that there can only be one Dark Lord of the Sith, and that the Sith Empire is stable, but somewhat stagnant.

Low Points : There just isn't much going on in this issue, it's all excellently told, but here we are at the third issue out of a run of six, and we're still setting things up. The conflicts in the Sith Empire are still being established, as well as the worsening of Gav and Jori's situation back at Cinnagar, as Aarrba reports their crimes to the Empress (which seems a bit of a reach to me, if someone steals your car in the USA, you don't report it to the President).

So what do you really think ? : Although the storyline is slowly moving forward, there's still too much set up for me going on, and I seriously hope that we get some real storytelling going on from the next issue.

Final Words : I can see why the Tales of the Jedi era grabbed me when I first read it back in the 90's. There's a lot of world building going on, and it fleshes the era out wonderfully, even if it does make the story move along extremely slowly, as all that happens in this issue is we discover Kressh and Sadow are in conflict to become the next Dark Lord of the Sith, and then Gav and Jori Daragon land and are caught by the two Sith Lords.